Two councillors in East Cowes have effectively now blocked free skateboarding sessions for kids as they say they don’t like the 15-year old Wight Trash name. It’s never been an issue in previous years. 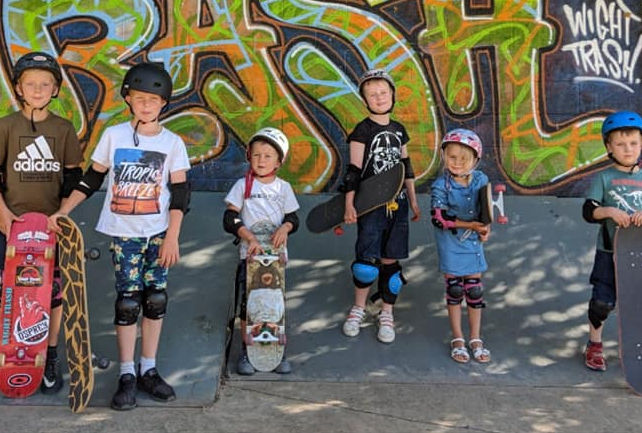 The much-loved and well-known Isle of Wight skateboarding brand, Wight Trash (founded by John Cattle 15 years ago), has met some unexpected resistance in East Cowes.

John Cattle’s Skate Club – a not-for-profit- Community Interest Company – has been successfully engaging Islanders of all ages for over eight years. With the support of local councils around the Island they offer free skating sessions for young people during school holidays.

East Cowes Town Council, who have previously supported the sessions, advised this week that although the sessions would be supported again this year, due to the objection of some councillors, there should not be any Wight Trash branding used in “any way, shape or form”.

“Not be politically correct”
The reason why? Because they say there was,

“Concern expressed that this may not be politically correct and that it might give out the wrong impression, especially if portrayed badly in the press “

The demands
The East Cowes Town Council said they would support the free sessions for kids in their town but only after,

“Written reassurances from you that the name “Wight Trash” would not be used in any way, shape or form in connection with any grant given by the Town Council or at any event held here in East Cowes or in any publicity or reports to the press.”

“As we replied to the East Cowes Town Clerk yesterday, we were really surprised at the conditions put with the agreement to run these sessions.

“Particularly as we have run them before with a great deal of support from East Cowes Town Council.

“Our skate lessons are run through our not-for-profit CIC, however we could not guarantee that there would be no mention “in any way, shape or form” of Wight Trash – as our equipment is branded and it’s likely some of the children who take part will have our boards and clothing!”

Positive response from community
She went on to say,

“What is really worrying is that over the 15 years we have been a skateboard businesses, that the councillors clearly have no idea about the work that we do, and the positive response we have from the community.”

“All we want to do is get people skating. We hope that the council will understand the link with Wight Trash – and that we are well known, and well supported, and change their mind about the conditions.

“We’d welcome councillors along to the sessions – they can have a go, sounds like they need some fun in their lives, and skating certainly does that.”

Last year several hundred children and young people took part in the free summer lessons and on average they teach about 300 children and adults a week.

“I am very disappointed to find out Cllr Paler and Cllr Love voted against a motion to provide free skateboarding lessons in East Cowes during the summer holidays.

“East Cowes Town Council did pass the motion to provide the lessons but to placate the issue regarding the potential use of some the branding “Wight Trash”. However the motions still mean the lessons cannot take place.

“I will be looking at getting this motion rescinded and back on the agenda for the next full Town Council meeting.

“In previous summers free skateboarding has been provided. We missed out last year and I don’t want East Cowes to miss out again.”

Love: “Not acceptable to me on so many equality fronts”
Cllr Karl Love confirmed he was one of those objecting to the branding of Wight Trash. Replying to Cllr Hendry on Facebook he said,

“I’m not against the service provided to young people but the organisational name interpretation is not acceptable to me on so many equality fronts.

“I object to the negative connotations of the organisational name and because there are other providers who might like to deliver this service though a transparent tendering process.”

“The questions that I asked is how many skateboard sessions would take place. There was not an answer so asked for more information.

“The vote was taken in favour of having the session.

“Since the meeting this has all kicked off to information given to Stephen.

“I have never seen anything about John Cattle skateboard sessions. I have spoken to John today and will be tomorrow after seeing town clerk.”

A well known Island brand name which is a tongue in cheek play on words. Massive own-goal by the Councillor’s concerned.

Tell me, councillors Love and Paler, what exactly is it that appals you about the branding of this group “on so many equality fronts”? Do you know where the term comes from, and why it was adopted? And what makes it more important to you than helping to enable this group to do its good work?

@ Robert Jones.
I couldn’t agree more with you. I can’t see anything wrong with “Wight Trash”. I think a full and complete statement from those objecting to it would be in order so that the rest of us are able to understand exactly what it is we are missing here.

Please let us know where thee term comes from. I’m intrigued… and disgusted with my local councillor Love. What you get with a sharp needle springs to mind….

What is see is that “Wight” sounds like “White” – all these years, since I was carried from the maternity ward at St Mary’s back in 1958 and it never occurred to me! I never knew!
Why did no one ever tell me!! All these years! The heartless & unfeeling swine! Gawd bless yer, Councillors foir putting us all right on that one!

Support for similar summer sessions in Newport is on our parish council’s agenda on Monday evening. Just as we have before, I am sure we will again support them with no conditions.

Thank goodness Stephen Hendry has some sense. Karl Love you should be ashamed of yourself. John Cattle and Wight Trash do an excellent job across the Island of keeping kids off the streets.Wight Trash should be applauded for their contribution to the community.

Just vote them out. I’ll judged, inept and embarrassing. Vote them out, they are not fit for the role. Pale, stale, fail. Baby dinosaurs.

You get your papers in plenty of time to ask questions before a meeting …. hence why you get papers 5 days before the meeting.

As a councillor it’s your role to do your research and ask questions. It’s about being open minded, unbiased and informed.

The urban dictionary has ‘…….trash’ as meaning more obsessed than simply a fan.

Wight Trash seems to be an appropriate name for a sport many islanders are super keen on.

As a member of the LGBTQ community I’m appalled that a fellow member, and as one of the Town Councillor’s making that decision, he should be so politically correct that his decision deny’s children and youngsters the fun of locally participating in healthy physical activities organised by a true professional. What’s happened to tolerance!

Had not had Karl Love down as a right-wing triggered snowflake, but with a name like “Paler” – well says it all dunnit ?
“Turned a Paler shade of Wight”

If the was someone else saying they’d like to have a go at doing something similar, put it out to tender and allow their branding to come with it. Until that point, don’t bite your nose to spite your face.

That last comment from Cllr Paler seems to suggest there is something else going on… that this is not what it seems, but a misrepresentation of his view by ‘Stephen’ – is that correct, or am I missing something?

I seriously doubt it. Cllr Paler’s statement has more than the whiff of a reverse ferret and Cllr Love stance is just plain classic political correctness gone mad. It really is quite ridiculous.