If you support justice for 1950s women and their families, or want to know more about the WASPI campaign, join others on Saturday 14th July in Newport or Southampton. 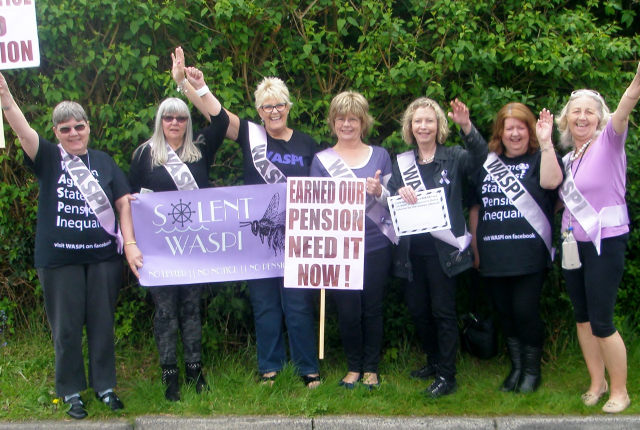 Saturday, 14th July 2018 is WASPI Regional Action Day. Representatives of Women Against State Pension Inequality (WASPI) groups across the south will be holding a rally in Southampton City Centre. A separate event will be taking place on the Isle of Wight.

The aim of the rally is to raise awareness about how changes to the State Pension Age (SPA) have adversely affected women born in the 1950s and to highlight the WASPI campaign. It will also send a strong message to the Government that our campaign will continue until we get justice.

They include the Isle of Wight, Southampton, Portsmouth, Havant, East Hampshire District Council and Brighton & Hove. We also have the support of some local MPs.

We are delighted that Alan Whitehead MP (Southampton Test), Councillor Mike Osment (Mayor of Salisbury) and Southampton City Councillor Tammy Thomas will be among those joining us on the day.

Two events
The rally day coincides with suffrage campaigner Emmeline Pankhurst’s birthday. In honour of Women’s Suffrage Centenary Year, some of us will dress as Suffragettes. After marching with our group banners from the Civic Centre, we will be outside West Quay Shopping Centre, Above Bar Street, at 12 noon where we will be acknowledging pledges of support, outlining the WASPI campaign, talking to shoppers and handing out flyers. We will be there until 4pm.

Isle of Wight WASPI will be in St James Square, Newport (near the Blue Door Café) from 12 noon until 2pm.

High profile supporters
Messages of support for our rally and campaign have been received from MPs from all parties and other supporters.

They include journalist and broadcaster Dame Joan Bakewell; women’s equality campaigner and descendant of Emmeline and Sylvia Pankhurst Dr Helen Pankhurst; writers/co-stars of touring production “A Necessary Woman” (a play about suffragette Emily Wilding Davison), Deborah Clair and Philippa Urquhart and lawyer/journalist Peter Stefanovic. The messages will be read out at the start of our rally. We will also be sharing some personal testimonies of women suffering as a result of this pension injustice.

Fighting battles of injustice
In this Women’s Suffrage Centenary Year, it is particularly important we recognise that women continue to fight battles about injustice and we want to bring to the notice of the public the difficult and unfair situation caused by changes to the SPA.

Participating groups are part of a national network campaigning for fair transitional payments for women born in the 1950s who have had their SPA raised by as much as 6 years with little, or no, notice. Many have suffered severe hardship as a result, affecting not only women but their families too.

We agree that men and women should retire at the same age and do not ask for the SPA to revert to 60. However, we object to the unfair way these SPA rises have been introduced, leaving no time to prepare for such a major change. Some women have been forced to sell their homes to make ends meet. After a lifetime of inequality and financial disadvantage, the least we should expect is a fair, properly communicated transition to SPA equalisation.

Take part
If you support justice for 1950s women and their families, or want to know more about our campaign, join us on Saturday 14th July at:

5 Comments on "WASPI women continue their fight for justice"

newest oldest most voted
Colin
The other aspect is that as more people are forced to work longer, then there are correspondingly less jobs available for the young. Whilst the government may save money on pensions, it will be paying out more in benefits to those who are unable to fill the vacancies that would be created by the propective retirees. What would you rather do, flog the elderly till they drop… Read more »
Vote Up9-1Vote Down
BigG
Like many tens of thousands of ladies, the love of my life, is still, balancing work and children, in our case, grandchildren, thus allowing daughter to work (and pay taxes). I see every day how tired she is, but she goes on, motivated by that huge heart that cares for her loved ones. I get angry, because I wish I could do something more to help, but… Read more »
Vote Up11-4Vote Down
islandwaspi

Thank you for sharing your perspective and highlighting that this isn’t an issue affecting only women. As you have pointed out, this unfairness has impacted on partners and whole families. Those who sneer fail to grasp that and show a mean spirit that makes me very sad.

If I identify as a woman can I have my pension at 60 please? I’ve paid my taxes.

Mark, this is about what was promised and that is a state pension at 60. And please don’t forget the massive contribution to the country and economy this generation of women have made in unpaid work.