The campaign group are hoping to attract at least 10,000 signatures from across the UK. 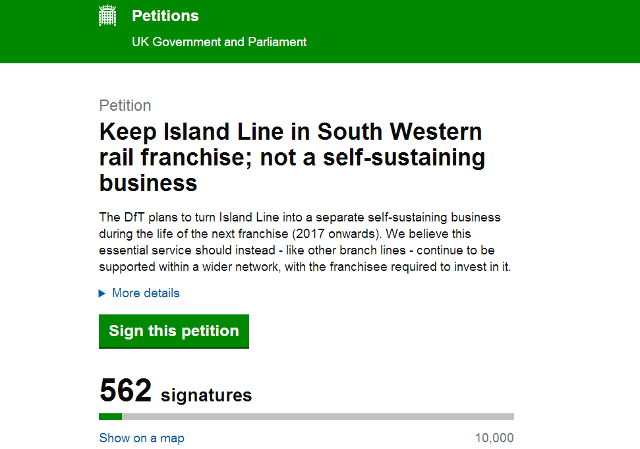 This in from Chris Quirk on behalf of Keep Island Line in Franchise (KILF) Group. Ed

KILF – the cross-party, community-led campaign to Keep the Island Line rail service in the South Western rail franchise – has launched an e-petition on the Parliament website.

Within 24 hours of going live, the petition has already attracted over 500 signatures – and is continuing to grow.

Keep the line within the franchise
The petition expresses concern about the Government’s plans to turn Island Line into a separate self-sustaining business during the life of the next franchise (2017 onwards), saying that the service should instead continue to be supported within a wider network, with the franchisee required to invest in it.

“Like many small branch lines, Island Line is currently underwritten by the profitable main commuter routes in the wider franchise. Yet under the Government’s plans for it to be self-sustaining, it would have to fend for itself. This model puts its future viability at serious risk.

“The Government’s approach to Island Line is also inconsistent with their support for other small branch lines – such as Lymington to Brockenhurst. We believe our local train service should, like these other routes, continue to be supported within a wider franchise model. The franchise bidders should be required, by the Government, to put forward plans to make the much-needed investment in the service, rather than wash their hands of it.

“Our petition is focused on demonstrating the strength of concern about the Government’s current plans, with a view to persuading them to change their plans and fully include Island Line’s requirements in the forthcoming “Invitation To Tender” for the franchise.”

“Any British citizens and UK residents can sign the petition; so any mainlanders with an interest in Island Line (or if they are concerned about the precedent which could be set by these plans for other small branch lines) should be encouraged to sign. We are promoting the petition far and wide, as if we can secure 10,000 signatures it will get a response from the Government.

“The petition complements our current preparations for responding to the consultation, as it will help us demonstrate the strength of support for keeping Island Line in the franchise.”

The petition can be found here

KILF is reminding Island residents that the deadline for submitting a response to the consultation is 9th February. Submissions can be emailed to [email protected]

Presumably either Govia – Southern or GWR taking on the franchise would be equally acceptable as both would continue national ticketing arrangements and both currently provide services into Portsmouth Harbour station for easy connection into the current Cat service to/from Ryde Pierhead.

Used this railway for over 50 years while on holiday plus it gives my parents a bit of life as it passes there back garden at Sandown station as they do not get out a lot now there in there eightys.

Vote Up00Vote Down
septua
The train always appears well used whenever I travel on it. Its a very good service and saves driving from Shanklin to Ryde. My only grumble is that the last train from Ryde only goes as far as St Johns Road. Probably passenger numbers will have fallen in the past year after the use of bus passes on it was stopped. I hope everyone will sign the… Read more »
Vote Up00Vote Down
Rod Manley

Better late than never I suppose. This petition should have been started at the KILF meeting in Shanklin.If it had been we might even be marching in Ryde or somewhere else on the route by now.Anyway, what do we expect from Pugh or the Labour Party leadership by now. Has ASLEF or RMT done much better?

Vote Up00Vote Down
Chris
Actually KILF has been very active trying to undo the damage that has been done but unrepresentative views about the future of Island Line that have been peddled in Whitehall. Marching on the streets of Ryde might be a very visible focus for our concerns but without changing perceptions with those who make the decisions on the future of Island Line its long-term future remains uncertain. Anyone… Read more »
Vote Up00Vote Down
Cicero

As I have written elsewhere, don’t believe that e-petitions will change anything.

As we now live in a country with a broken democracy, there are virtually no effective options to ensure MPs carry out the will of the people.

Petitions (and ‘Public Consultations’) are now just a way for citizens to collectively voice a viewpoint … which is then ignored or PR’ed and twisted to death by corrupt politicians.

Vote Up00Vote Down
phil008
Stephen, i cant see Southern getting the franchise, they already have the south covered with southern, south eastern, thameslink and gatwick express. They also own southern vectis, there wouldnt be any competition !!! Whoever gets the franchise through ticketing will still be possible. The idea of the petition is stop the government and the dft making islandline self sufficient when a lot of other branch lines are… Read more »
Vote Up00Vote Down
Stephen
>phil008 Department for Transport – DfT or DafT as named by Private Eye – seem to be moving to larger franchises as presumably it reduces fragmentation of control etc. Just image Southern might take over the SWT franchise so effectively back to the 1923 Southern Rlwy area. Govia owning bus operators did not put off DfT awarding the GTR-Southern franchise with Govia owning Metrobus and Brighton and… Read more »
Vote Up00Vote Down