It was inadvertently revealed at a Regeneration Workshop this week, as Portsmouth University Masters students presented their mock-up plans for regeneration of the Harbour area. 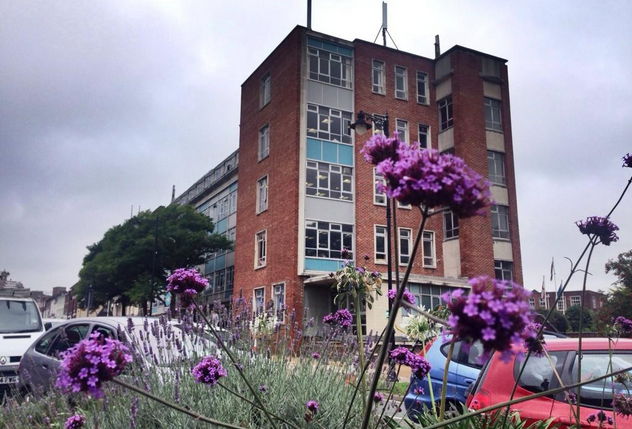 The news appeared to slip out by accident, when mock-up plans were shared by Masters students from Portsmouth University. They’ve been working for the last year on regeneration plans for the County town as part of their Masters project.

All move to Camp Hill
The news was greeted with shock by those attending the workshop – particularly given that it included demolishing County Hall.

At the end of the evening, as Leader of the Isle of Wight council, Cllr Dave Stewart, drew the event to a close, he explained the move and his vision for a “One Island One Service” hub at the former prison site, Camp Hill, where the Isle of Wight Council and all emergency services would be based.

Discussions with minister
Clrr Stewart’s vision for the integrated service was announced back in March prior to the local elections.

He said eight months ago that he’d already spoken at length to the then-local government secretary, Sajid Javid, about the plans.

“There was a lot of confusion in the room, it caused more shock than any of the students’ ideas!

“After Council Leader Cllr Dave Stewart clarified the situation, myself and others in the room found that the idea did make sense. Whilst there was no timescale, I agree that in the long-run this should ultimately save money and be a more efficient way of managing services.

“It will also open up more space for the regeneration of that area of Newport.”

The Camp Hill site
Camp Hill Prison was decommissioned and the land handed back to the Ministry of Justice in 2013. The move was part of a reorganistion of the prison

Two years later, in 2015, when OnTheWight approached the Ministry of Justice about plans for the land, they said,

“We’ll be letting people know in due course, but there is no definitive decision yet.”

No decision has yet been made about the move to Camp Hill, which is currently still owned by the Ministry of Justice.

I think both those ideas are brilliant!

Demolish the eyesore – how did that ever get through the planning process?

Keep the Councillors locked up and only let out for good behaviour!

Was it just short of £1 million that was going to be spent last year on doing up County Hall with a large amount on new workstations and the like? Did that happen? Is there any coherent plan or is it just lurch from one wheeze to another with no overall plan?

Is it any wonder that the council are broke?

With all the money that has been and continues to be poured into County Hall the building should be used to capacity, not torn down.

With all the shedding of jobs, services and other sundries there shouldn’t be enough staff to even half fill county Hall (which a friend thought was a Comprehensive School from the 70’s) but the way things are going you could put the ‘rule makers’ in my living room!

I note that we didn’t hear anything about proposals for the Harbour area which was the purpose of the meeting. No news is good news?

It does indeed look like a SCOLA system building which was mainly used in the 70s for schools.

Probably best place for them. Never known a honest councilor.

Vote Up1-1Vote Down
Robert Jones
Then you’ve not known many councillors. The vast majority of the many I’ve known over some 45 years was entirely honest; they may not ALL have been the most brilliant minds of their generation, and some did have quite an eye for the main chance – but the great bulk of them, from all parties, worked hard and honestly for their wards and electors, and I’ve seen… Read more »
Vote Up1-1Vote Down
electrickery

This Council is determined to waste as much cash as possible.
Granted, County Hall is an eyesore, but so are Vestas and countless other triumphs of the Planning Permission farce. IWC should offer the ground floor of County Hall for retail/commercial purposes and start doing something useful!