Superintendent Sarah Jackson shares this letter to all residents of the Isle of Wight, setting out how the police are responding to Covid-19 rules and guidelines, as well as how they have been tackling crime 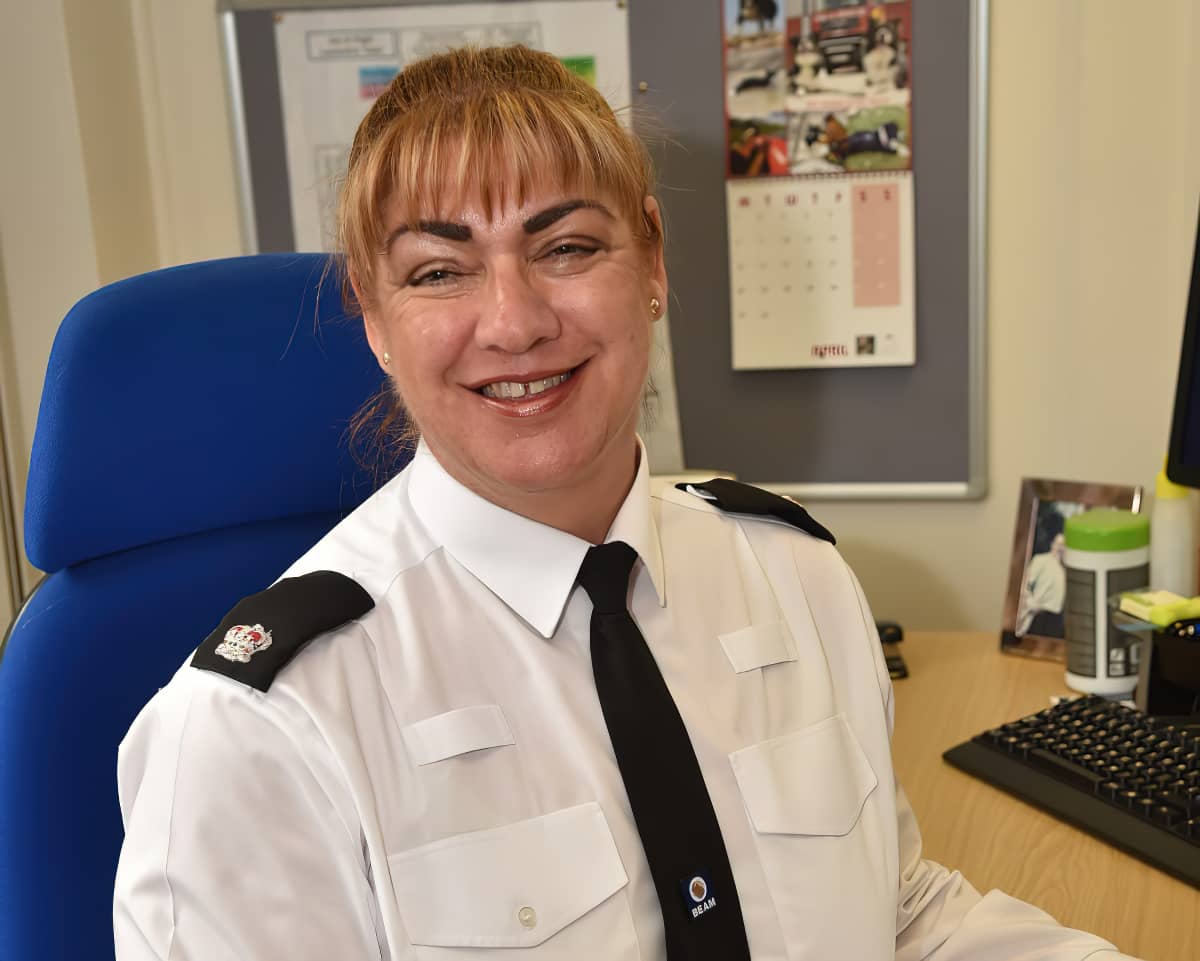 This from Superintendent Sarah Jackson, in her own words. Ed

It has been a while since my last letter to you, but I wanted to reach out to you all again as we continue to get through this pandemic together and adapt to new changes.

I want to thank you all for your resilience throughout what has been a difficult year for everyone, and an additional thank you to all who have followed the government guidance and played their part in trying to stop the spread of this awful disease.

What police have been doing
Since Monday 12 April there have been some noticeable changes in what the government calls its roadmap out of lockdown. I want to provide some clarity to you on what we as your local police service have been doing, and will continue to do, in light of these changes.

You will no doubt be familiar now with the term ‘Rule of Six’, and since 12 April this has come into play once again for social gatherings outdoors. This means that no more than six people, or two households, can meet up in an outdoor space. In these circumstances we still encourage people to be socially distanced.

Meeting indoors
With regards to meeting people indoors, there is no change to the position on this currently. When you are indoors, you must only come into physical contact with people from within your own household.

If you are uncertain at all regarding the latest changes, then I encourage you to take a look at the government website which sets out the roadmap, and which services and facilities are now available.

However, I wanted to highlight to you that you may now recognise that the latest changes to the roadmap no longer impose a restriction for second homeowner travel. The easing of restrictions on Monday 12 April allows our communities in Hampshire and on the Isle of Wight more options for travelling further from home and meeting friends and family outdoors, where the rule of six or two households remains.

Second homeowners can travel to the Island
In addition, self-contained accommodation such as holiday lets, where indoor facilities are not shared with other households and you are able to cater for yourself, can also reopen.

This means that second homeowners are also able to travel to the Isle of Wight to stay in their own accommodation, assuming of course that they are only staying there with people from within their own household.

Breaches are reviewed
I want to assure you that where we have received reports of breaches, we have reviewed them and attended where appropriate, adopting a 4E approach (engage, explain, encourage to comply and as a last resort enforce).

Throughout the pandemic we have conducted regular patrols in those areas identified as repeat locations for breaches.

Patrols at ferry ports
In addition we have been conducting patrols at the ferry ports both on the Island and mainland which has seen officers engaging with travellers as to their reasons for travelling. This has included close liaison with the ferry operators to respond to any concerns they identify.

It is important for us all to remember that while the move towards ‘normal’ life is welcome, there are rules still in place and it’s important to remember this when planning activities with family and friends.

Working with partners
So what does that mean in terms of policing? Well, we along with all the other members of the Local Resilience Forum (local authority, health, ferry companies and many more), will continue to work together as we have throughout the pandemic.

Those agencies with enforcement powers, such as the police and local authority, are working with other partners to ensure that both the guidance and legislation are understood. The difference of course being that the guidance is not enforceable.

Our approach in relation to identifying hotspot areas will continue, as will our patrols to identify blatant breaches. Like before, we will use enforcement as a last resort, but those involved in blatant breaches of the Health Protection Regulations, such as at indoor parties, can still expect to receive a fine.

Personal responsibility
The responsibility lies on all of us to keep each other safe and prevent the spread of the virus. We can’t become complacent and risk undermining what we’ve achieved so far.

We are still in the midst of a pandemic and everyone’s priority needs to be the safety of themselves and others.

We do of course recognise the impact that the pandemic has had not just on individuals, but on local businesses too.

Local businesses
We work in close partnership with the local authority who have a key role in supporting local businesses, and making sure they are operating in a Covid-safe environment and within the guidelines.

The business regulation and public protection team have shared their thoughts with me, and recognise that it was a massive challenge for local businesses to prepare for re-opening after months of closures.

Shop local
To share the words of the team’s manager, Rachel Briscoe,

It’s been tough for the local high street traders throughout the whole pandemic and it is important to support local businesses, now more than ever.

“When people shop locally, they are not just supporting their favourite store, or market stall but the whole Island economy.

It has been an incredibly busy policing year that has seen us not only adjust to the challenges presented by the pandemic, but doing that whilst remaining focused on our day to day policing priorities.

This has involved targeting drink and drug drivers, dangerous drivers in rural areas such as the Military Road, and cracking down on other vehicle related offending to ensure our roads are safer for all.

Beat patrols
Neighbourhood teams have walked their beats night and day to focus on local issues, and we’ve seen some positive results in the Ryde area, for example, in taking action against nuisance behaviour and individuals responsible for ASB and associated crime.

Many of you may have started to get to know our neighbourhoods officers, as well as our response and RP/ARV officers, as they regularly post about what they’ve been up to on our dedicated Isle of Wight Police Facebook page which has grown hugely in popularity over the last year.

National campaigns
We’ve been involved in national campaigns and weeks of action, most notably our work to tackle County Lines drugs supply and Operation Sceptre – a committed partnership response to knife crime which has involved police working with local metal detectorists to get knives off our streets.

Their input and expertise has been invaluable.

Darren Rose was jailed for 7 years back in October for a violent burglary which took place in Cowes the previous year. However, the 29-year-old’s sentence was increased to 9 years at the Court of Appeal in February this year.

David Berridge, aged 27, Craig Nathan Knowles, aged 35, and 27-year-old Reece Chilcott were all jailed in the last year for unconnected robberies at shops across the Isle of Wight.

Jonathan Richard Maertens, aged 35 years, was jailed for life with a minimum term of 25 years, and 62-year-old Graham Medway was jailed for 9 years – both in connection with unrelated child sex offence cases.

Our partnership work, in particular the review of CCTV in the area, helped build a strong case against Willett, but ultimately it was the bravery and dedication shown by the victim which ensured Willett is now behind bars.

In another recent case, 33-year-old Karl Waller-Adams was jailed for 42 months on 15 March in relation to a violent domestic assault. We’re committed to tackling domestic abuse and bringing perpetrators to justice. Alongside partners and local domestic abuse charities, we focus on support for victims and providing help to those leaving abusive relationships.

My reason for outlining cases such as these is to hopefully provide you – our community – with re-assurance that we are here to help you when you need us and of our continued commitment to working tirelessly to protect the vulnerable in our community, including of course victims of crime, and bring to justice those who cause the greatest harm within our communities.

Filed under: Island-wide, Letter to the Editor, Police

Here in proud old London,
people wear masks in accord with the rules
but everywhere you go you’ll find cigarette stubs and boxes.
Call me naive, but where’s the logic in observing covid19 rules to protect health and save lives
while the cigarette business is free to destroy both for vast profits shared between itself and the so called Government?

And booze!
Just look at the impact of booze on the health of individuals, families and communities.
Then look at the cost of alcohol to the emergency and health services.
The only people outside of the industry doing well out of booze are undertakers and the Treasury.

Vote Up7-2Vote Down
broc
Despite the assurances of Superintendent Sarah Jackson I have no confidence in the police keeping us safe during the pandemic unless a reasonable explanation is given by the police informing Island residents why they chose not to respond to enforce Covid 19 legislation rules and guidelines in the days before last Christmas. Regulations cited as the Health Protection (Coronavirus, Restrictions) All came into force at 7.00 a.m.… Read more »
Vote Up8-4Vote Down