Concerns have been raised for litter pickers, dog walkers and other wildlife, as fibre glass insulation blown off Red Funnel’s demolition site in East Cowes is spotted around the town. 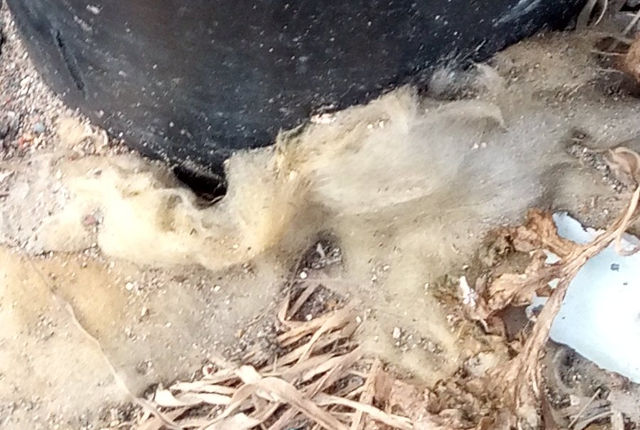 Residents and dog walkers in East Cowes are being warned by a resident to take care, after fibre glass insulation blown from Red Funnel’s demolition site was found scattered around the town last week

Initial concerns were that the material contained asbestos, but Red Funnel have stated to OnTheWight today (Monday) that this is not the case.

“We are confident that the minor fragment of waste that has blown off the East Cowes demolition site is loose fill insulation (fibre glass).

“Prior to the demolition, a full asbestos survey was conducted, and the asbestos identified was removed in a controlled environment as per regulations, along with any other hazardous materials.”

Fibre glass is known to cause irritation to eyes, nose and throat, as well as stomach irritation if fibres are swallowed.

Dangers of fibre glass raised
East Cowes resident, Keith Turner, who spotted the loose material last week and launched a campaign on Twitter to alert others, is still concerned the material could be a risk to litter pickers, dogs and other wildlife.

“We work extremely hard to ensure our sites are kept tidy and the contractors in place have since removed any loose material that has unfortunately blown off the site during the recent strong winds.”

Red Funnel “Certain no evidence of fibre glass insulation on the public footpaths or road”
OnTheWight has asked Red Funnel further questions in relation to the risk of fibre glass.

“We work extremely hard to ensure our sites are kept tidy and on this occasion, the minor fragment of loose fill insulation (fibre glass) that unfortunately blew off the demolition site to the adjacent pavement, was cleared immediately once brought to our attention, eliminating any risk to dogs or animals.

“We have undertaken a further clean-up of the site and its surrounding areas and we are certain that there is no evidence of the fibre glass insulation on the public footpaths or roads. We will of course continue to monitor the situation while the demolition work is in progress.”