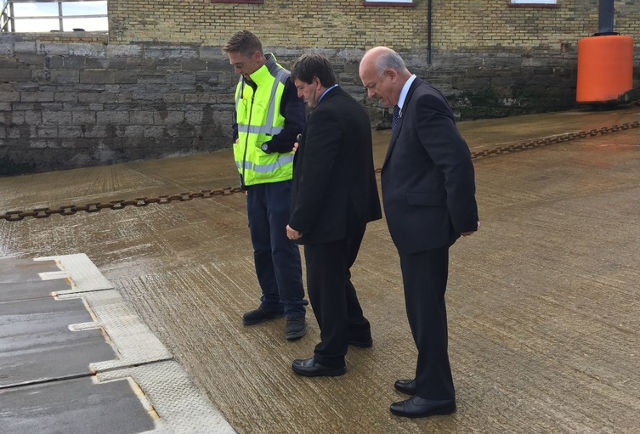 As reported earlier today, the Isle of Wight council may pursue legal action against the company responsible for the technical specification of the Cowes floating bridge.

Will “never be fit for purpose”
The Floating Bridge Stakeholders Group said 71.7 per cent fewer pedestrians with ‘economic potential’ now used the bridge, compared to 2014.

This excluded commuters and only looked at passengers likely to spend money in either town.

They argued the bridge would never be fit for purpose, and should be scrapped and replaced entirely.

Stakeholders: “This will cost the taxpayer millions”
In a response to the Solent LEP, they said:

“The council needs to acknowledge enough is enough. Throwing more money at it is wasteful, where as scrapping and starting again may be more economical.

“This will cost the taxpayer millions more either way.”

Increased crossing times
The stakeholders group argued the time to cross the Medina had more than doubled — at times taking more than 23 minutes.

Earlier this month, the group that runs the Floaty Finder Website said the bridge was running so slowly, their algorithms thought it had stopped entirely.

Love: Bring back old bridge if feasible
Councillor for East Cowes, Karl Love, has previously backed the return of the old bridge.

“If it were possible to bring back the old bridge, even if it was only a temporary solution until the new bridge issues are resolved, then it would go some way to restoring confidence in the service.”

He said he did not know if it would be feasible, but he was prepared to listen to the different options.

He said it was a mistake to sell off the old bridge before it was known whether the new one would work properly.

9 Comments on "‘Floating Bridge 6 should be scrapped’, say stakeholders"

newest oldest most voted
eastcowes
The Stakeholder group which is mostly engineers told the Council in May 2017 to reject the floating bridge, and then procure a new one (using a low-interest loan) and to buy a launch. Instead they have wasted more money, including over a half million pounds hiring a launch, and what, they have an idea that maybe they should buy a launch instead of hiring one for tonnes… Read more »
Vote Up25-2Vote Down
atlanta

Could have told them this month’s ago

The Stakeholders did tell them, since May 2017….

Vote Up160Vote Down
I do not believe it

If ‘Floaty’ is to be taken away to a scrapyard may I respectfully suggest that our dozy Tory Councillors jump on board to await joint demolition?

Here we go again! When are the Powers that supposed to Be going to stand up an be counted and LISTEN to sense and the people that voted them in.

Vote Up60Vote Down
denbo17
Cant really make any comments on this post as I do not know exactly what is wrong with the floating bridge. So can anyone on this post and the previous posts please explain to me what is “exactly” wrong with the bridge, so that I am then able to approach the council with the correct and precise knowledge which will then be used to fix all the… Read more »
Vote Up2-14Vote Down
meganz0e10

It is more a case of what is right with the Floating Bridge. Ask the business people whose businesses have suffered and some gone to the wall and the people who live nearby the have to put up with the noise etc etc. Goodness where have you been for the past year.