The leader of the Isle of Wight council admits they council “could have moved quicker as the facts unfolded” about the catalogue of problems with floating bridge 6. 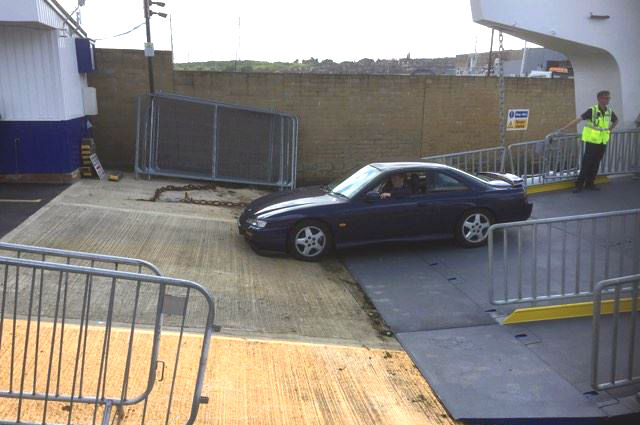 As reported earlier today, the Isle of Wight council may pursue legal action against the company responsible for the technical specification.

The problems that plagued the Cowes floating bridge cost more than £6.4 million according to a report published in November by the Solent Local Enterprise Partnership (LEP) — which funded the original £3.2 million cost of the bridge.

Additional money spent on the bridge included £500,000 on remedial works and £539,000 on a replacement launch service. A barge is also required to push the bridge against the tide, costing £192 an hour.

“We can’t just go giving it back. If you’re sitting on the LEP board what are you going to do with a floating bridge? You wouldn’t accept it.”

Leader: “We could have moved quicker”
When problems with the bridge first came to light, many criticised the council for taking a long time to sort out the issues, and the bridge was taken out of service for weeks at a time.

“I’m not going to excuse the council on this, I think we could have moved quicker as the facts unfolded. But we are where we are.”

Pushboat options
Leader of the Isle of Wight council, Cllr Dave Stewart, said the council would cost three different options to reduce the need for the pushboat — including a change to the hydraulic system or installing small side thruster engines on the bridge to push against the tide.

“The third option is to buy our own pushboat.”

The council also considered buying a passenger launch for times when the bridge was taken out of service.

Noise complaints
Residents on both side of the River Medina have complained about noise — particularly late at night.

Cllr Stewart said the council had already reduced the noise by ten decibels, but work continued to reduce this further.

No political oversight
At the time the bridge was designed, the council was run by the Independents, led by Cllr Ian Stephens.

“When you agree multi-million pounds into a project, you should have a proper management board overseen by members who can ask questions.

“The questions being asked now should have been asked then.”

Stephens: Officers “the experts”
There was no political oversight of the design, and Cllr Stephens said this was left to the officers, who were the experts.

“I don’t think anything I could have done would have added any value. I don’t know about other people.

“You rely on their professional advice.”

“I think, even with hindsight, we could not have averted any of the issues that came to light.”

If the new floating bridge did not fit the requirements drawn up by the council why was it signed off?

Vote Up400Vote Down
eastcowes
The engineers of the Floating Bridge Stakeholders Group pointed out to the Council in May 2017 that the requirements couldn’t be met, and that many were in conflict with one another. Cowes Harbour Commission clearly said before the floating bridge was designed (in the stakeholder survey) and after it was designed and not built (1 Dec 2015 BCTQ minutes) that making it longer and issues with the… Read more »
Vote Up240Vote Down
eastcowes

Here are the requirements and other documents BTW. Go to this Council webpage and then click on the Floatinf Bridge 6 tab. https://www.iow.gov.uk/Council/OtherServices/Cowes-Floating-Bridge/Floating-Bridge-Number-6

Er, Dave Stewart, that is highly misleading to say that the Board wouldn’t want the floating bridge. They might want their money back, but what you said isn’t in the Funding Agreement… stop spinning. Everyone can see through the smoke and mirrors…

I smell a rat here…. why are the council coming clean now ? Is it election time, by any chance ?….

The chains are only part of the problem, Dave. If you listened to the local engineers, you’d know that there are other problems. The noise has been going on a lot longer than the chains have stretched a bit, so new chains won’t work for long…

Vote Up280Vote Down
eastcowes
3 months of the barge/push boat has cost the Council over £44,100 – almost £15,000 a month (according to an FOI). Obviously Dave doesn’t know that the sound has gotten worse again on the prows as the shoe has been worn down; they haven’t measured the sound recently! The Stakeholder group which is mostly engineers told the Council in May 2017 to reject the floating bridge, and… Read more »
Vote Up26-1Vote Down
eastcowes

I should say that when we say that barge is costing the Council £15,000 a month, it’s really costing US that money. The meagre income from fares is already spent, yet Dave Stewart tried to say that the barge’s costs are ‘offset’ by the fares – not true.

The Council Officers are part of the multifaceted problem.

G.1.7.1. Vessel to be designed to achieve a crossing time of no more than 2.5 minutes, at half tide,
when carrying the design deadweight with level trim on a draught not exceeding 1.40m, with the
main engine operating at not more than 85% Maximum Continuous Rating (MCR).

Did it ever got over in 2.5 minutes ???
Just one of the items pulled from the Tech Spec…

G.5.6.9. From the data recorded on the operational trials it is to be demonstrated that the
vessel at the design draft of approx. 1.40 metres is capable of achieving a normal
crossing time of not more than 3 minutes at High Water in either direction

G.5.6.10. The loading prows to be tested for clearance when loading and unloading vehicles.
Particular emphasis is to be given to low cars and trailers

H.1.19.8. The ramps are to be of welded structure, plated on top and with an open bottom structure.
The ramp profile is to prevent any grounding of vehicles during loading and unloading. The
minimum clearance of the design vehicles to the ramps is to be at least 50mm

Cllr Stewart said:
“When you agree multi-million pounds into a project, you should have a proper management board overseen by members who can ask questions.
“The questions being asked now should have been asked then.”

That assumes the members have the necessary knowledge to ask the appropriate questions and understand the answers; very little evidence of that has been seen.