In response to a 22 year business in East Cowes, who said the failures of the floating bridge resulted in her business being decimated, leader of the Isle of Wight council, Dave Stewart, said “I think some of it is down to your business case. I haven’t seen Waitrose close” 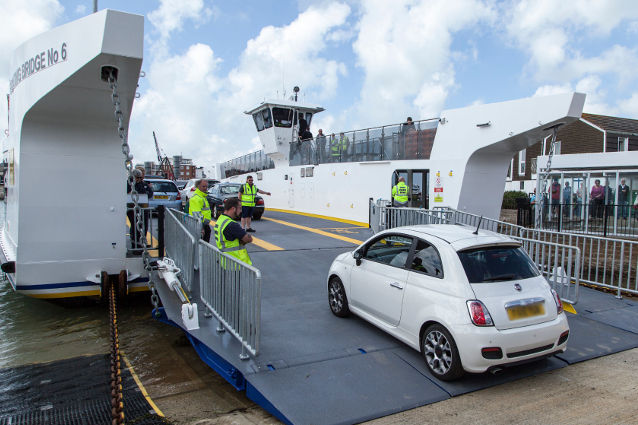 Following news the Isle of Wight council may pursue legal action against the company responsible for the technical specification, a shop owner who closed her business after more than two decades in East Cowes said the Cowes floating bridge was to blame.

“But with the Floating Bridge, footfall was not here every single day, which we relied on.”

She said since she had shut up shop, at least four other businesses had followed suit.

“I think some of it is down to your business case.

“I haven’t seen Waitrose close. It will have an effect but I don’t think you can put it all down to the bridge.”

Resident: Unbearable noise
Meanwhile, a resident who lives next to the bridge said the noise was so unbearable, he would soon be forced to move.

Noel Brooks has lived on the River Medina for eight years. He said:

“Sometimes the noise at nighttime is like someone has got a big mallet and is hitting the hull of the ship, but it’s just the chains.

“It’s just noise, and we are fed up. I’d like to meet the person who says the noise is acceptable.”

Peacey-Wilcox: Impact of bridge failures “unacceptable”
Councillor for Cowes Medina, Lora Peacey-Wilcox said the impact of the bridge had been unacceptable.

“The economy both sides has suffered dreadfully. People used to enjoy popping to Cowes for food and drink, and likewise Cowes residents used to nip across to Waitrose on a regular basis. This has dramatically declined.

“From having to wait longer, uncertainty, added to the fact pedestrians now pay; the necessity of having to load and unload passengers and cars separately have all had a negative impact.

“Quite simply, and with a heavy heart, Floating Bridge 6 will never be fit for purpose, it is too large, and too heavy for this crossing.”

Just demonstrates the narrow mindness of Mr Stewart comparing a multinational supermarket chain with a tiny local business. Especially as the whole fiasco of the floating bridge is 100% down to the council’s total incompetence. I dearly hope that the people of East Cowes remembers his remarks when he wants their votes next time round. Mr Stewart, YOU ARE A DISGRACE.

Waitrose has been badly affected by this floating bridge. There have been several articles about it. Clearly Dave Stewart doesn’t understand how businesses work. It makes me worry about his ability to run our ‘Island business’.

Vote Up92-1Vote Down
davidm
The comments made by Lora Peacey-Wilcox are spot on, the most sensible i’ve read. We used to go across to Cowes every Friday evening for something to eat and/or drink, taking in a walk along the seafront. Somebody would always benefit from our custom. Since FB6 has been introduced we’ve been less than half a dozen times, precisely for the reasons she states, and it’s not something… Read more »
Vote Up92-2Vote Down
Alternative Perspective

What an outragously crass statement!

Well we know who to vote out of office come the next Council Elections!

Waitrose not closed ? He clearly doesn’t understand corporate business plans.Big corporations can ride out any temporary fall in trade in localised areas….As usual, bullsh*t excuses.I know just how hard it is running a small 1 man band shop/business, even without having external detrimental factors….

Vote Up810Vote Down
eastcowes
Brava, Lora Peacey-Wilcox. Spot on! And the Council’s ‘solutions’ to some of these problems? Buy a launch just like you and the Stakeholder engineers suggested. And put side thrusters on it or buy a barge to push it? OMG!! And for the record, these are not ‘teething problems’ or ‘snagging issues’, Ian Ward. The Council has just wasted tonnes of taxpayers’ money with no proper fixes, and… Read more »
Vote Up65-2Vote Down
holdmyheadinmyhands

Just wondered if Noel Brooks has reported the noise to the relative departments or I suppose the Council have closed them down to save money.

Vote Up31-1Vote Down
meganz0e10
What a moron Mr Stewart is! Actually if Waitrose are not affected why are they sending out unsolicited vouchers with money off if you spend £30 to homes the other side of the Island. Come on Mr Stewart get a grip this debacle has affected lots of businesses. The total the Council have put into this white elephant and the amount lost through trade cannot be calculated.… Read more »
Vote Up23-1Vote Down