How ‘local’ are your Isle of Wight election candidates and does it even matter?

Some candidates are making the point that their opponents are ‘not local’ to where they’re standing. But do they actually live in the ward themselves? 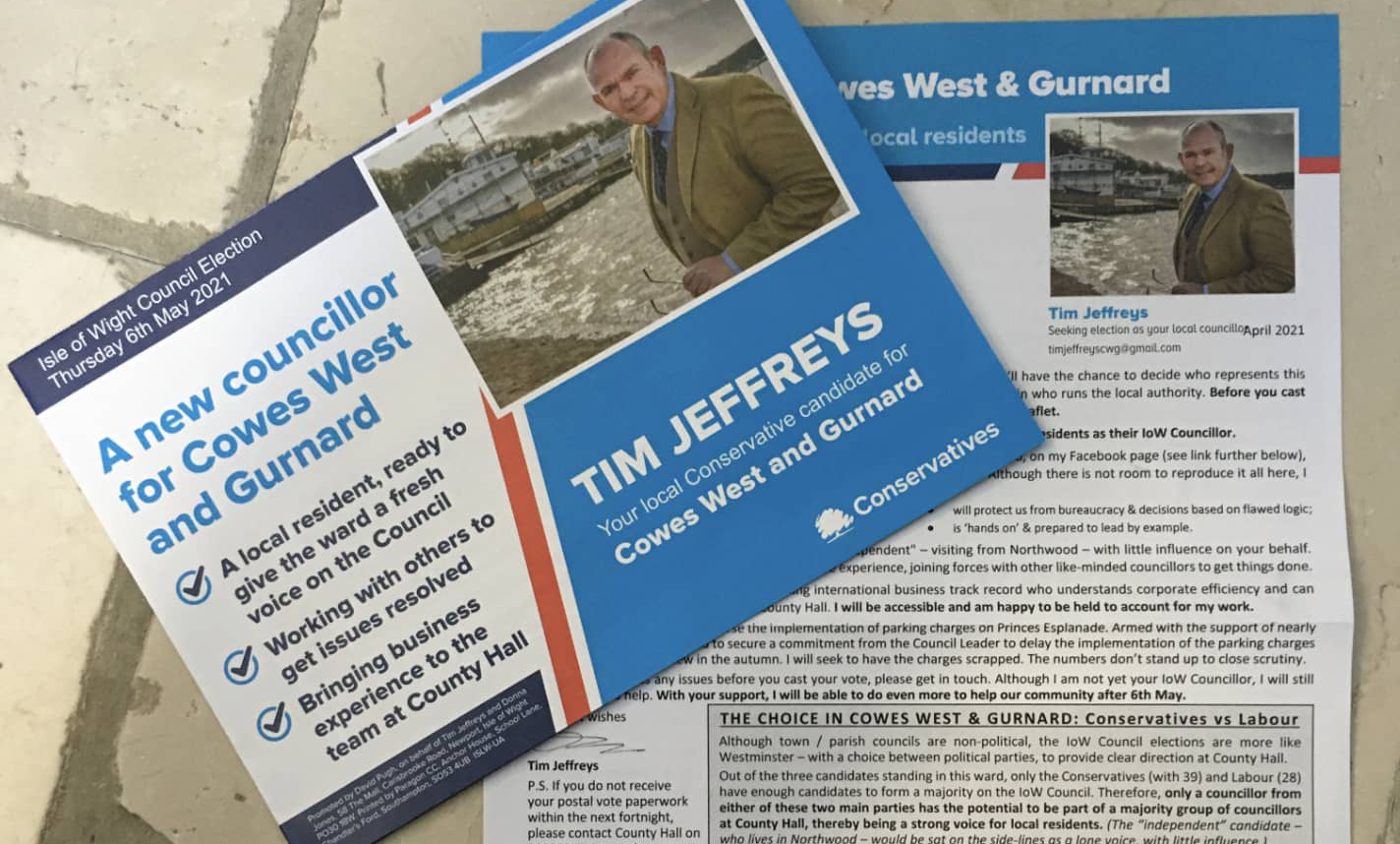 With less than a week until the 2021 council elections things are really hotting up in political circles on the Isle of Wight.

Here at News OnTheWight there have been a flurry of emails and messages from residents about claims made in election leaflets. Overwhelmingly they are about Conservative letters or leaflets.

“I’m local”?
In the Cowes West and Gurnard ward the Conservative candidate Tim Jeffreys says he’s the best candidate because he is local, making a point that the Independent candidate, long-time IW councillor Paul Fuller, lives in Northwood.

His leaflet and letter was shared with News OnTheWight by a resident in the ward who said,

“According to the electoral roll Mr Jeffreys doesn’t live in the ward either.

“Perhaps he’s confused about the boundaries, but it would be good if he could apply the same suitability criteria to himself as to other candidates.”

News OnTheWight has written to Mr Jeffreys asking whether he lives in the ward and will update once we hear back.

Parking meter saga
The resident went on to point out that Jeffreys also takes the credit for halting the introduction of parking meters on Gurnard sea front.

As reported by News OnTheWight last year, it was Cllr Fuller who initiated a campaign and petition (with 3,000+ signatures) to withdraw the parking meter proposal put forward by the Conservative administration, who went on to reject it.

“Mr Jeffreys has recently struck a deal with the leader of the council to delay the introduction of the meters until after the election, in my view simply as a vote winning exercise without any guarantee of parking remaining free on the sea front.

“The final sting in the tail of Mr Jeffreys’ communication is the glossy fold out pamphlet featuring photos of him at various landmarks around the ward, but it was printed in Chandler’s Ford. So much for supporting local businesses.

“As a resident of Cowes West and Gurnard, I just want to see candidates show genuine integrity, capability and support for the Island. I haven’t got time or the appetite for misinformation and misdirection.”

10 Comments on "How ‘local’ are your Isle of Wight election candidates and does it even matter?"

newest oldest most voted
chausettes
Tim Jeffreys has clearly been using the David Pugh playbook. In my time I’ve actually found Paul Fuller to be very helpful, despite him not being the councillor in my own ward. I can’t say the same of my actual ward councillor, Paul Bertie (who is, as you’ve probably guessed…. a Conservative! If Paul Fuller can be helpful to me, as I am an ‘outsider’, then that’s… Read more »
Vote Up64-2Vote Down
Steve Goodman

Which is also a reminder of the time shortly before the election of the current con councillor complained about, when the cons kept very quiet about their then best candidate being a dangerous drink-driver who also had a lot of help from the non-reporting of some helpful magistrates waiving the usual sentence for being four times over the limit…

Vote Up430Vote Down
chausettes
Pugh has a habit of picking people without proper scrutiny – look at how quickly they dropped a Ryde candidate after all the fuss about his misogynistic comments to female MPs on Twitter. Also, look at Steve Sheridan (Obviously a man of the people as an ex-commodore of a Yacht Club with Royal Patronage). Steve had to go some to clean-up his own Twitter account and purge… Read more »
Vote Up320Vote Down
chattyrat

Interesting you should mention Ryde candidate Steve Sheridan and his twitter account. It’s a shame he deleted all those disgraceful messages to another female candidate. Shame nobody challenged him and took screenshots before he deleted them! Tory sleeze extending further than Westminster.

Ooh-er. Next we will be expecting the MP to live on the Island. I remember the last one did, but he seemed to get confused as to which house it was.

None of the candidates in the election of Police and Crime Commission live on the island so I do wonder how they can make informed decisions from a mainland point of view.

Yes, and one of the candidates is standing on behalf of an organisation which appears to cover Hampshire only…

andy – do you mean the cracks created by May and Cameron –

What does it matter where people live?

For example, why all the fuss over Boris Johnson’s redecoration costs for his new flat? He’s simply trying to paper over the cracks left by his predecessors, which clearly is going to take some doing, hence the cost of his wall paper.