No stranger to awards for her services to equality and diversity, Yve has now been named the British Empire Medal in the Queen’s Birthday Honours list. 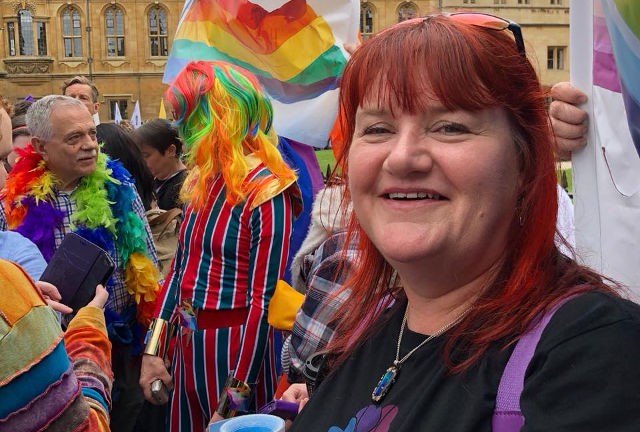 An Equalities Officer on the Isle of Wight is among those being recognised in the 2019 Queen’s Birthday Honours list.

Yve White has been awarded the British Empire Medal for her services to Equality and Diversity on the Isle of Wight.

Unison Equalities Officer
Many will recognise Yve as a founder and former Trustee of the Isle of Wight Pride, but her services to equality go back much further.

In 2010 Yve became the Equalities officer for UNISON, and now sits on various regional committees and has been a delegate on a number of occasions at National Conferences.

She was selected as the only representative of the South East Region to be part of delegation to Cuba with UNISON.

She was pivotal in gaining sponsorship and fundraising for this event, together with ensuring that all the necessary safety and licensing arrangements were met.

As reported, the first Isle of Wight Pride was hugely successful, attracting 5,000 attendees from the Island and other parts of the UK.

White: Humbled and excited to be honoured
Yve White said,

“I’ve always been a proud LGBT ally and never sought any recognition for myself, so I’m humbled and excited to be honoured in this way.

“UNISON has given me so much encouragement over the years. It’s been incredible to be part of a union that’s so committed to equality and justice in the workplace and wider society. In whatever small way I’ve helped to advance those amazing causes, I am truly grateful.”

Other awards
No stranger to awards, Yve received the ‘Best Ally’ Award from the Isle of Wight Pride team, Isle of Wight Radio Local Hero award for community engagement with Team Pride and an Amnesty International award for ‘Suffragette Spirit’, one of only two women from the Island to be recognised.

She received a UNISON special achievement award for services to Pride/LGBT community. As an LGBT ally, she has received wider recognition for her activism attending LGBT receptions hosted by the Prime Minister at Downing Street, the Lord Mayor of Westminster and the Ambassador of Sweden.

“Yve has been a tireless champion of equality and diversity for many years and it’s an absolute pleasure to congratulate her on behalf of UNISON’s 1.3 million members.

“She was one of the driving forces behind Pride on the Isle of Wight and UNISON is so proud of Yve. Her work has helped make the island a better place for everyone and she could not be more deserving of recognition.”

Although I don’t really agree with the honours system, at last we have an Islander from the labour movement being recognised, rather than the usual usuals. Well deserved Yve. And I believe it was my partner Mary who recruited you to Unison in the first place !

Well done and well deserved, Yve. You tiressly fly the flag for equality and diversity on the Island. The hard work and commitment behind the scenes and out of the limelight has enabled many to feel more accepted, liberated and empowered. You are a real local heroine.

I didn’t. She’s from the ‘labour movement’; note the lower case l. A movement that includes trade unions. The same movement that a non-Labour Party member like me is from.

Who said Yve was Labour !?