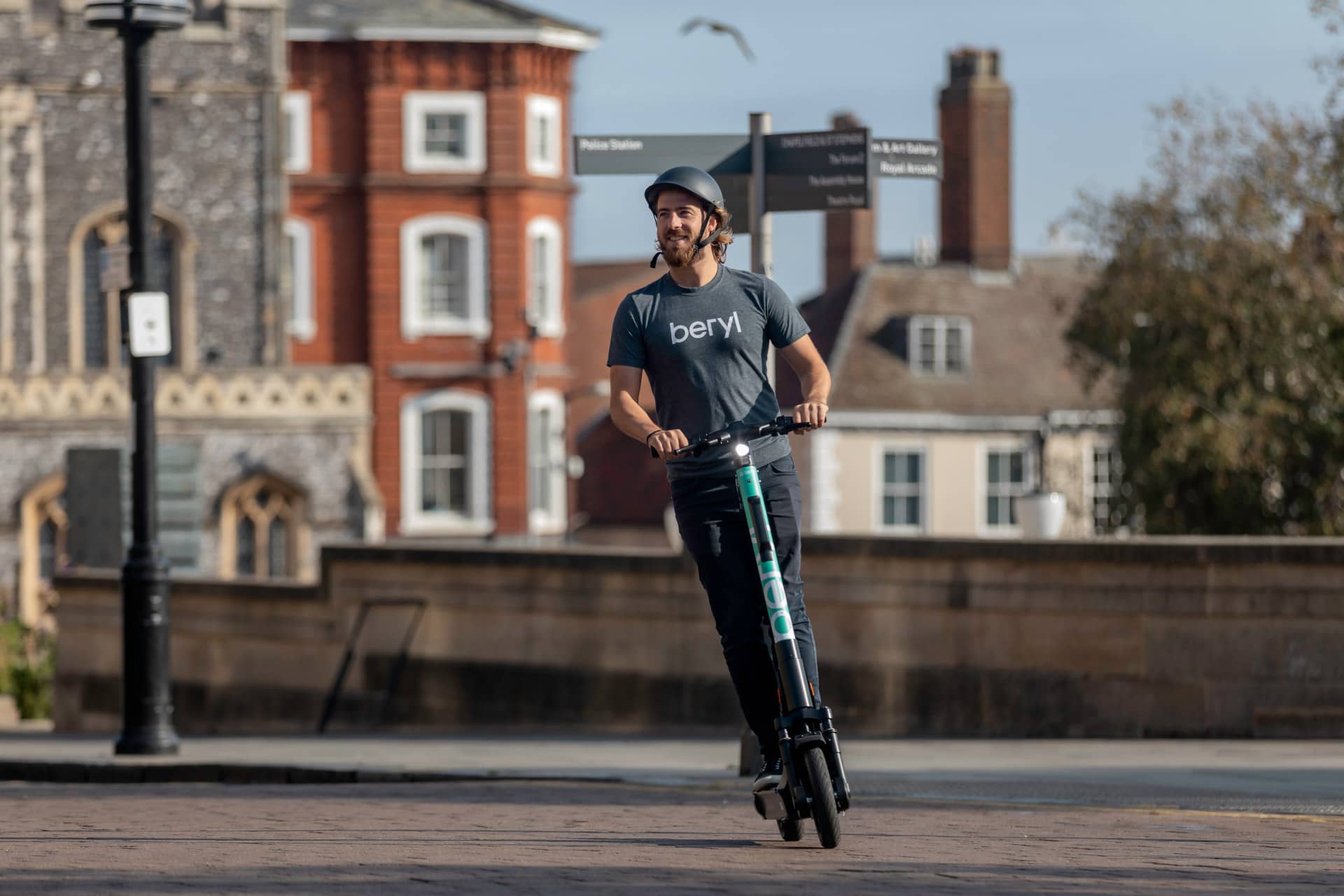 The Isle of Wight Council, Solent Transport and British micromobility provider Beryl, are co-developing plans for an e-Scooter pilot program on the Isle of Wight as part of a trial being considered across the Solent area.

If confirmed, this will be part of a national trial sponsored by the Department for Transport being delivered through Solent Transport’s, Future Transport Zone programme.

Hire from ‘Beryl Bays’
If successful up to 75 e-Scooters will initially be available to hire from ‘Beryl Bays’ on the Island from November, as part of a measured roll out that ensures Beryl and the Isle of Wight Council can develop operational details in partnership with relevant stakeholders and the wider community.

Beryl’s innovative hybrid parking model, that encourages riders to park in geo-fenced bays, will provide residents and visitors to the Isle of Wight with sustainable and affordable transport that does not impede on the Island’s social infrastructure.

No funding from IWC required
The e-Scooter pilot programme requires no direct funding from the Isle of Wight Council and is the first of many trials planned by Solent Transport.

The partnership body representing Isle of Wight Council, Hampshire County Council, Portsmouth City Council and Southampton City Council, is awaiting approval from DfT to introduce a 12-month trial scheme of rental e-Scooters in a number of areas across the region.

How it’ll work
Beryl e-Scooters, which will be able to be hired through the Beryl App and in the future through a ‘Solent Go’ Solent-wide smart card and travel app, will only be legally allowed on the road and cycle lanes, not on pavements. They must be picked up from and parked at a network of specially marked Beryl Bays located on the street and in the Beryl app. Users will be required to provide a valid UK Driving License, while all of Beryl’s e-Scooters have a speed cap at 12.5mph and can be restricted by the operator where lower speeds are deemed necessary.

Other sites
Beryl currently operates an e-Scooter scheme in Norwich and bike share schemes across Bournemouth, Christchurch and Poole, Watford, Norwich, Hereford and the City of London.

Beryl and the Isle of Wight Council hope the introduction of the e-Scooter hire scheme will encourage a switch to a greener mode of transport for shorter journeys. Hire e-Scooters can also boost local economies by providing income opportunities and an increase in foot traffic along high streets and other commercial areas.

“The Isle of Wight is a fantastic place to host these e-Scooter trials and Beryl is excited to give the Island an opportunity to play a leading role in transforming how the UK travels in a greener and safer way post COVID-19. With the Isle of Wight part of Solent Transport’s Future Transport Zone it is exciting to be working in a region with an ambitious vision for mobility innovation.”

“We are proud to provide an e-Scooter that meets the highest safety standards, and will offer every user with a comfortable and smooth ride. We look forward to working with the Isle of Wight Council and Solent Transport, as well as other key organisations from the police to local disability groups to ensure all residents and visitors are positively impacted by this trial.”

Ward: Could help to tackle climate change
Cllr Ian Ward, Cabinet member for transport and infrastructure for Isle of Wight Council and Chair of the Solent Transport Joint Committee, said,

“We welcome this trial to the Isle of Wight. E-scooters could help the Island not only as we emerge from this pandemic, but as we look to tackle climate change by offering a greener and healthier alternative to the car for many journeys.”

News shared by Charlie on behalf of Beryl, in his own words. Ed

I can so no benefit whatsover with this scheme. Scooters on the road doing 12mph? Just what we need. Not legally allowed on the roads yet; I wonder why? Another total waste of taxpayers money.

Be alright up the Medina bypass though….

They probably won’t ride in the road but will ride on the pavemnts instead and make them dangerous for pedestrians, especially the disabled, elderly and small children.

it is not unknown that cities all over Europe have struggled with these scooters; visit any European city and you will find them abandoned all over the streets and in local rivers. without proper management, we might find ourselves facing the same issues.

Hate to break the news, but there’s clearly a trial going on already from the number of scooters I’ve seen around the place.

Why on earth is it legal to buy these if it’s not legal to use them on public roads??

Simple, because you can legally use them on private land….

Are they any more dangerous than a bicycle?

Vote Up50Vote Down
jarundel
There are roads with pavements that are rarely used by pedestrians – safe for cycles, mobility scooters and e-scooters to travel on the pavement. There are roads with no pavements – dangerous to all those using them not in a car. Then there are shared routes – safe for pedestrians and others when consideration and care are shown. Cyclists and e-scooterists are not required to wear crash… Read more »
Vote Up20Vote Down
lifewriterbutmainlybeer
Having hired the e-scooter, will the rider be insured if they are involved in an accident? (A 12 mph scooter hitting a vehicle travelling at 30 mph, head on, would result in an impact of 42 mph.) Will riders also hire the crash helmet shown in the photo and, if so, will it be sanitised before use? I understand that they will have to be ridden on… Read more »
Vote Up3-2Vote Down