He says, “Our intent is not to remove the playground, but rather to locate it where it can be most beneficial.” 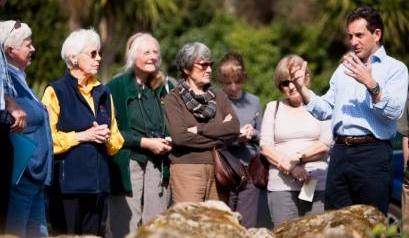 Readers will remember the article we published last week, reporting that owners of the Ventnor Botanic Garden (VBG) were considering moving their playground equipment to elsewhere in Ventnor where it would be more accessible to families.

John Curtis the head of the VBG CIC, which owns the 125 year lease on the Garden, responded in the comments section of the article later that day.

For the benefit of those who did not see his comment, we’ve reproduced it here.

“Happy to donate our equipment”
He said, “I would to repeat the comments I made to the Ventnor Town Council last night. First, as I said we have a Playground Only tariff of £2 as well as Community Mondays and Fridays.

“Our interest is making sure the playground is useful to the community. If Ventnor can find a location that is more accessible than the current one, we would be happy to donate our equipment.”

Playground may remain where it is
He goes on to say, “Our intent is not to remove the playground, but rather to locate it where it can be most beneficial.

“If there is no better place for it, then it will stay right where it is.”

You can read the rest of John’s comment here.

newest oldest most voted
Cath
Does it really matter? Does anyone still go to the Botanic Gardens? Personally I don’t know anyone who goes now, after the introduction of charges, which is a shame. But it was predicted by most of us. A reduced fee of £2 to use the children’s playground? Wow!! Is John Curtis so out of touch that he doesn’t realise that kids playgrounds are FREE all across the… Read more »
Vote Up10Vote Down
tulsevent

The problem with moving a playground is always, who will take on resposibility for insuring the users. In the late 1990’s there was a serious accident at the BG’s playground which cost the Council many £’000s.

Vote Up00Vote Down
honestjohn
The last time my wife & I visited the Gardens with our daughter-in-law & grandson it cost us £15 to basically use the play equipment. We were not aware or advised of a lower tariff. Even at £2 per head we are not planning to use the gardens again as it is a ridiculous amount of money just to use the equipment that was I believe purchased… Read more »
Vote Up00Vote Down