Jonathan Dodd: A stripe too far

He’s back! Jonathan Dodd returns with his column. Seemingly talking about one thing, but in fact telling us about another. As always, a great Sunday read. 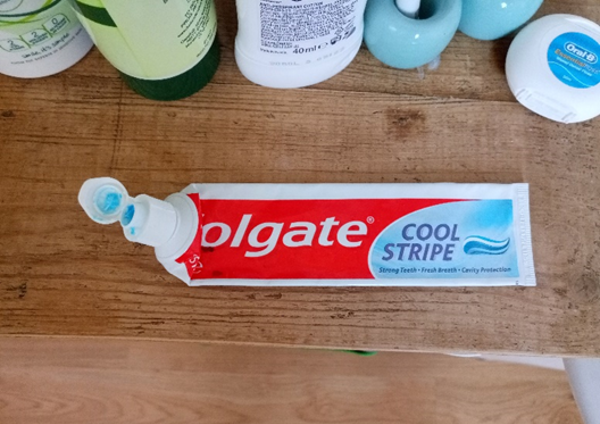 I think the thing that hurts most about the whole thing is that they didn’t even ask. Someone somewhere at Toothpaste Headquarters decided, for reasons unknown, to switch off production, for reasons unknown, without consultation. Will I ever find out who? Will I ever find out why? Like hell I will. And that makes me mad. I wouldn’t mind so much if I didn’t care about my toothpaste. I happen to like the taste of this one very much, and I’m used to it, and it seems to do the job, because my visits to the dentist are far between and short. So my toothpaste and I have had a good relationship, long-term and happy.

The top of the retail hierarchy
All that has been wrenched apart now, and I’ve been trawling the shelves of all the supermarkets I can reach, searching for evidence of the continuing existence of my familiar red tube. I started at the top of the retail hierarchy, and I’ve now worked my way down to the bottom, where I used to find the odd tube. How I wish I had stocked up then, if only I’d known what was to come. I suppose I should have be more worldly-wise, reading the retail signs for brands that were being phased out in favour of new improved colours and flavours that could be sold at a higher price for more profit and market-share.

Alas, I took my eye off the ball, I was blindsided by the forces of History, I never saw it coming, and now I’m bereft. The price of liberty is indeed eternal vigilance. But how was I to know that this applies equally to human rights, membership of the EU, the future of orangutans, and toothpaste preferences. There are too many things to keep your eye on nowadays, that’s the problem. Things move too fast, the pace of technology comes at you like telegraph poles through a train window, and you often don’t even know that you’re behind the times until you’re the object of derision because you can’t spell VR, or other some such bewitchery.

I’m a discriminating consumer
The other problem here is that most people won’t have a jot of sympathy for my dilemma, mainly because they don’t have brand loyalty for toothpaste. But then I have no understanding for anyone’s preference for fruit-based technology that has software designed for people whose brains are either wired differently or aren’t wired at all. Yes they’re pretty machines, but surely that’s not worth paying twice the price of alternatives, and causes you to become a far more likely victim of senseless street crime. Senseless, because street crime is senseless, and because why should anyone want to steal something that doesn’t even work very well?

I have a phone that was less than a third of the price of these outrageous items, and I know I couldn’t even give it away to street urchins, even though it has a massive battery that lasts me a week, and I can drop it 20 metres into a lake and it’ll still work. It has a name that nobody I know has ever heard of. And I always buy automatic cars, because why would I want to keep shifting gears when the car can do it for me? And I’ve never heard of anyone ruining an automatic car through overworking the engine either. And the price of second-hand automatic cars is lower too, so I win all round. So I’m a discriminating consumer. And I like my toothpaste. Or, rather I used to like my toothpaste, but it’s being denied to me by uncaring capitalists.

The Man from the Mint was placid in the face of this onslaught. This is more or less what he said.

“People get used to things, and they worry when those things are changed. But things change all the time. They didn’t like having their ten-bob notes taken away when this old 50p coin that they so love now was brought in.

“They’re complaining now, but as soon as they get used to the new coin, they’ll wonder what all the fuss was about, and if or when we decide to change it again, they’ll howl jut as loudly. Change is inevitable, and people always resist it, but only because they’re used to things being one way and they don’t look forward to getting used to a new thing.

“It’s nothing to do with 50p coins. It’s about feeling unsettled.’

Change is good
I must admit I was impressed with this point of view, and it made complete sense at the time. I subscribe to the school of thought that proclaims that ‘Change is good’, and I’ve just caught myself out failing to remember that. I think my annoyance is more with the attitude of those making the change that they don’t need to take account of their customers or inform them of impending changes so they can get used to it all. I think they could do that better.

So I’ve allowed myself to let off some steam, and I’ve shrugged my shoulders, and accepted that there are no more tubes of the old toothpaste available, and I’ve squeezed the last dose out of the tube, and I’ve thrown it away. And I went to my local supermarket and bought a tube of a different stripe. And, actually, I quite like the taste. Maybe I’ve been lucky, or maybe I was making too much fuss. Or maybe I was forgetting first principles, which involve living in the actual world and not wishing for things to stay the same too much, which is the first stage of entropy, which I’m vehemently opposed to, since entropy is the enemy of survivability.

Remaining positive and optimistic in the face of uncertainty
I shall miss my old toothpaste, but I’ll remember it with affection, and use it as a reminder, so I can remember not to get stuck in ruts, or fail to embrace the challenge of change, and to remain positive and optimistic in the face of uncertainty. Change is good. And there are no rules. Speaking of which, I’m currently reading a brilliant book called Sapiens, by Yuval Noah Harari, which is causing fireworks to go off in all directions in my brain. He wrote this on Page 31, and I love it.

“There are no gods in the universe, no nations, no money, no human rights, no laws and no justice outside the common imagination of human beings.”

If I had written that, I’d feel that my work was done.

4 Comments on "Jonathan Dodd: A stripe too far"

Pleased that you are back this week.
Really missed you!

Vote Up10Vote Down
Alternative Perspective
Surrounding ourselves with familiar things like, Kellogg’s Cornflake, Cadbury’s Chocolate and stripy tooth paste are important comfort blankets in an ever increasing virtual world where reality can simply be an illusion. So if you are feeling a little angst ridden by the speed of change spare a thought for a culture like China’s, where within a lifetime one can be plucked from a poverty ridden rural existence… Read more »
Vote Up3-3Vote Down
Jonathan

There are no rules.