Three library campaigners have a meeting with the DCMS today to discuss the council’s plans to close five libraries on the Island.

As we mentioned last week, three campaigners from the Friends of Isle of Wight Libraries, are on their way to London today. 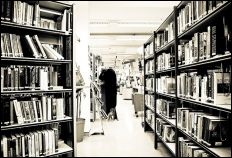 The three have been invited to meet with officials from the Department for Culture Media & Sport in Whitehall to discuss the council’s plans to close several libraries on the Island.

They’ll be handing in letters and email of support from Islanders (which they thank you all for) and will be pointing to the DCMS to the hundreds of comments on VB about the council’s plans.

We’ll update you later today, once the campaigners are on their way back from the meeting.

Very much look forward to hearing what happened. Did they take some oil to remove earwax from officials ?

Vote Up00Vote Down
Richard Beet
We have to say that the arguments are watertight and that if the DCMS listens to reason, then we may have reason to be optimistic. The Bembridge Library Users Group submitted a very strong case for retention of the libraries under Council control and we will publish that later whatever the outcome. We just want to thank Dave, Serena and Heidi for all their hard work and… Read more »
Vote Up00Vote Down
No future
Has anyone noticed that the staff at many of the libraries are different and there doesnt seem to be the same continuity as there once was? Everyone seems to be trying their best to be helpful but its almost as if the heart’s been ripped out of the service. I hope some good comes of the campaign as things are very different now so what will it… Read more »
Vote Up00Vote Down
Asite2c

We only have Pugh and the bunch to blame. They remind me of a group of vandals that put the boot in and don’t care about how people feel.

They’re not only ripping the heart out of public services, but the heart of many Island communities that have developed over years.

Vote Up00Vote Down
daveq
Good evening all, just back- very tired but happy. There was no ear wax removal needed, we met two senior officers from the libraries department and one ob the DCMS lawyers- contrary to what we put up with from the Isle of Wight, no only did they want to listen- on amy [oints they encouraged us to go further. We were told that we only had an… Read more »
Vote Up00Vote Down
daveq

apologies for typing errors, haveing left home at 6.30am and arrived back at 6.45pm- I am shattered!

Vote Up00Vote Down
watching the pennies

Well done Dave, sounds positive. Look forward to the press release tomorrow. Thanks on behalf of everyone to the three of you for what you are doing.
I have heard that some of the submissions were of a high quality and very professional. Here’s hoping for good news.

Very well done Dave, I don’t think you all could have done any more. Now I suppose we have to see whether their courtesies translate into action! As you say, what a contrast with IWC.
I’ll pass this on to the others in BLUG. I’m sure they will also be very pleased.
Put your feet up, you deserve it!