We’ve all seen or heard about the dramatic erosion of the coastline along the Military Road over recent months. 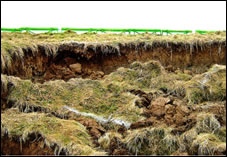 Having driven along recently, we’d also seen the barriers near Brook, but had no idea just how close the road has become to the cliff edge.

This shot (larger version below) taken by Ian Boyd at the weekend, really shows just how serious the situation is becoming.

At this section in Brook, the road is just 4m from the recent landslide.

Liberal Democrat Prospective MP for the Island, Jill Wareham has been campaigning for awareness to be raised on this subject and last month launched an online petition to ‘Save the Military Road’.

She said “Urgent action is needed as the road is likely to be closed very shortly if the erosion carries on as it has over the past week or two. I have visited the area where the cliff is closest to the road between Brook and Compton over the past two weekends. The first visit revealed a cliff fall at this point and in the past week another substantial fall has taken place. The footpath has slipped over the edge and the distance between the cliff edge and the fence along the road is now only 5m.”

The section which seems the most serious is near Brook. To get an idea of scale, zoom out slightly and you’ll see the car on the right hand side of the image.

Jill continues, “The Isle of Wight Council’s Cabinet is due to discuss the matter at the end of March, but this maybe too late. The Road is a vital link between the South and West Wight.

“It is used by many locals and thousands of tourists each year. It is the most photographed area on the Island, and even features in the recent Isle of Wight Council’s PFI information. The loss of the road will have a major impact on the village of Brook if the traffic is diverted. There needs to be a long term solution to the problem at least to tie in with the expected life of the Afton Down part of the road. All the relevant organisations need to get together to find this solution and this needs to be done urgently.

There’s an online version of the petition which you can sign, as well as copies in local shops and pubs.

The first shot below is reproduced courtesy of Ian Boyd and the others courtesy of Jill Wareham.
[nggallery id=144 ngg_gal_ShowDescription=desc]

Not a bad shout at all.

Vote Up00Vote Down
Vix
It’s not usage (although that section used to be used as a layby) it’s simple erosion made MUCH worse by the current cold spell. The aerial shot doesn’t do it justice as the road is much closer to the edge than that – it drops down to s shelf before the edge of the cliff. A *huge* amount of land has fallen onto compton too – the… Read more »
Vote Up00Vote Down
Andy
I often walk my dog both on Compton (as the dog police are still hibernating until May 30th) and at Brook and have to say the number of huge land slides that have occured here recently have been almost daily. If you stay put and watch the cliff you`ll see soil crumble away right in front of you. I give this stretch of road 6 months at… Read more »
Vote Up00Vote Down
Vix
Yes :( Every time I think about it going into the sea so soon – before the summer – I feel a pang of grief. That’s the only way to describe it. Almost physically hurts. The alternative routes (through Brighstone and also Brook) will be just awful – villages with few pavements having lorries and coaches driving at 30mph at all hours. Only a matter of time… Read more »
Vote Up00Vote Down
Andy

Urm… I think it’s more about the 200 billion gallons of water lapping at the cliff bottom than the 1-2 cars that occasionally park there to let their little ones from spending a penny.

Vote Up00Vote Down
GJ
I walked the coastal path from Brook to Chale on 27th January. In some places the path has completely disappeared – gone over the edge – and no divertions are marked, so it is quite dangerous. In other places you have to get through barbed wire because the path that was between the wire and the edge is no more. Apart from the safety aspect, the Coastal… Read more »
Vote Up00Vote Down
Vix

I’m not sure about Brook to Chale, but I saw at Compton Farm the coastal path was closed until they rebuilt the barbed wire fence and moved the footbridge over that growing Chine much closer in land. That was done relatively promptly.

I imagine the council are waiting until spring and after the winter cliff falls before redirecting paths? If that is at all possible…

Something does need to be done about this if the problem is as serious as people are saying. I have been told there are beautiful views along this road, but I am terrified of heights and thus too much of a wimp to look out of the window whilst driving along it!

Vote Up00Vote Down
Student
The Council is bankrupt – not just of money, but of ideas too. The residents parking scheme was welcomed by most people, but now we know that it was never affordable. Every year for the past five it has cost taxpeyers Â£1m, so Â£5million in total. They are ignoring the Military Road, just like everything else that matters – they just haven’t got a clue how to… Read more »
Vote Up00Vote Down
Christopher Bonney
The long term prospects for the South Wight are looking increasingly bleak in the hands of some deeply flawed thinking at County Hall. The abandonment of Undercliff Drive and the Military Road can only serve to disenfranchise the entire area along the coast, in particular, Niton and Ventnor will be set to become backwaters. As the town shrinks due to the failure of business, it will receive… Read more »
Vote Up00Vote Down
L PINKERTON
When the previous temporary work was undertaken past St Lawrence it was given a 20 year life, so 10 years left? It looks as if the Military Road will go in the next two years? It’s a beautiful drive but does anyone in the ruling group bother any more about the real reasons that tourists come here. They do not all want Sandown and Shanklin to be… Read more »
Vote Up00Vote Down
Vix

I’ve just seen about this in the County Press. Very bad news, it could all collapse very shortly :(

– photo taken an hour ago of the lights.

For people who don’t often drive up here.