Isle of Wight Conservative MP, Bob Seely, has sent seven questions to the Transport Minister about Isle of Wight ferries, including if they’d support renationalising one of the services. 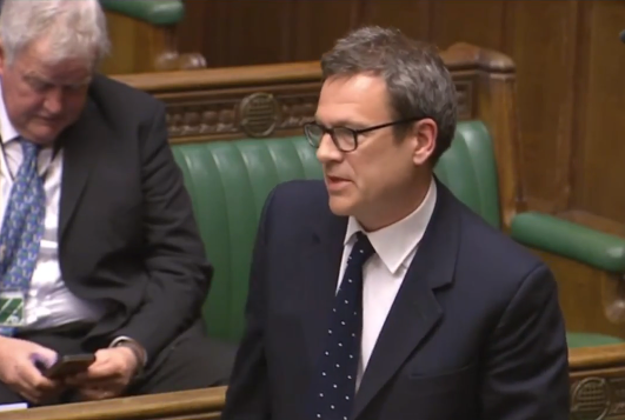 MP Bob Seely has written to the government asking it seven questions about the Island’s ferry companies including whether ministers would consider a buy-out of either Wightlink or Red Funnel.

Bob wrote to transport minister Nusrat Ghani this month and said Island residents were receiving “iniquitous treatment” compared to other UK Islands on travel costs and the companies were effectively a duopoly.

Bob has previously called for a public service obligation to be imposed on the ferry companies to lower the cost of travel and pointed out Scottish island travel is subsidised.

Concern over previous ‘denationalisation’
In the letter Bob said,

“Of particular concern to Islanders is the fact that the firm was ‘denationalised’ in the 1980s with no public service obligation, in stark contrast to the regulated, franchised arrangements subsequently put in place for the railways.

“Many of my constituents believe this to be a considerable mistake. The Island has suffered since by having some of the most expensive ferries (per mile) in the world.

“Even with some modest discounts occasionally offered by the ferry firms in some instances, this adds to operational costs for businesses and damages our visitor economy.”

“This letter is making it clear the government must look at this issue and answer these questions on behalf of Islanders. The cost of ferry travel is too much and I will continue to lobby the government to take action.”

“We will not be commenting on any potential change to the company’s ownership structure.”

At time of publishing Red Funnel had failed to respond, but we’ll update once we hear back from them.

newest oldest most voted
Darcy
Bob Seely is asking some of the right questions and good on him for that. How successful he would be with a Private Members Bill remains to be seen. One of the key points is that the ferries are an integral part of the UK highway and therefore should be subject to a public service obligation which should facilitate access for all. There are not only people… Read more »
Vote Up56-2Vote Down
Colin

Have a read about Road Equivalent Tariff (RET)that is applied to the Scottish island ferries. Ther’s none of this time pricing nonsense either, just one flat fare. Remember the days when the IW used to have that?

That is worth a read by everyone… the statistics/analysis is very interesting. In short, car ferry prices were reduced by some 65/70% and traffic increased by 30-50%. Sounds like a no-brainer but who pays what to whom ?

Vote Up20Vote Down
Mike Starke
Darcy makes some excellent points. Here’s another “unacceptable” cost Wightlink imposes on its customers, especially those who have limited mobility and have no alternative than to park on the pier. They charge a quid to get onto the pier and then demand another £6.70 to park for between two to 16 hours. I suggest this catches most people, as a two-hour cross-Solent visit to Portsmouth would give… Read more »
Vote Up23-4Vote Down
doughnut

They will take every opportunity to improve the financial yields of the company and do not care who they tread on to do it.

Vote Up16-2Vote Down
njb249
Please remember that the IOWC had the opportunity to purchase the part of SeaLink that served the island, the cost in the mid 1980’s £12 million. In 2018 that is the equivalent to £36,720,000. Wightlink’s owner, Basalt Infrastructure Partners, stated that it could be sold for an estimated £300m. That’s an 817% equivalent increase of what it could have been bought for. Ask yourself the question about… Read more »
Vote Up100Vote Down
greenhey

A fixed link would NOT lead to a drop in ferry fares. In any event it is extremely unlikely to happen, for massive economic , engineering and political issues in doing such a thing,

Vote Up9-3Vote Down
Colin
So, who owns Calmac, who provide the majority of Sailings to the Scottish Islands? The answer is effectively the Scottish government. https://www.calmac.co.uk/article/2518/Company-History It is worth having a look in the reports previously mentioned in this thread to see the price of crossings and see how a state owned company could dramatically reduce prices if the will to do so is there. This was one of the benefits… Read more »
Vote Up20Vote Down
jimc

I wrote to our MP the other week pointing out how the Scots are subsidising their Island Ferries with a £200 million grant , probably straight from us.

There is a petition that need another few thousand signatues
https://petition.parliament.uk/petitions/227134

Vote Up10Vote Down
Tim
14 months after being elected Bob finally starts to ask questions about cross Solent travel, whatever took him so long? But there is much more to do, the CMA needs to enquire into whether the huge fare discounts that a few privileged companies get is disrupting the tourist and distributive trades on the island to the disadvantage of both businesses and public alike and we do need… Read more »
Vote Up9-20Vote Down
carlfeeney
Well…. it appears the fixed link campaign is certainly putting the pressure on the MP to curtail the oppression on islanders and visitors alike by the two ferry companies. Think again though…. all is not as it appears. The facts: 1/ The MP’s cousin Patrick Seely is a Red Funnel Director. Red Funnel have already expressed an interest in lowering fares if the government will subsidise them.… Read more »
Vote Up20-36Vote Down
Tim

This looks more like a panic measure from Bob now that the IW Labour party are giving the matter their attention. He seems to have spent the greater part of the time since he was elected in trying to divert attention away from the cross-Solent transport issue.

If you took the interest on £3 billion (supposed cost of fixed link) you could run the ferries for free for perpetuity.

Vote Up13-4Vote Down
Tim
Thats not on Bob’s agenda or the Government’s. Free ferries are even less likely than the fixed link and there would still be the same old excuses about why they aren’t running. It would great if the IWC was to buy the Lymington-Yarmouth route off Wightlink and run it as a 24/7 shuttle service with a return fare of £ 20 for an HGV & £ 10… Read more »
Vote Up7-9Vote Down
richardshanklinite

so 3300m looks cheap & as per Wightlink site Investment funds such as the Macquarie European Infrastructure Fund (MEIF) have a lifespan. MEIF is reaching the end of its lifespan and so it’s selling a number of its investments, including Wightlink perhaps it is time that our ferries were more than just a temporary cash cow/investment.

Vote Up2-1Vote Down
richardshanklinite
One of the problems with the ferries there so called value (say £300M) has been boosted by the fact like most of these takeover companies they can set off the loan costs of purchase (at what ever inflated price that can be fixed) against profits thus reducing the tax man take for some years. Perhaps it is time the government stopped this practise which in turn would… Read more »
Vote Up15-1Vote Down