Quite a few Conservative MPs came out to defend Conservative HQ (CCHQ) after they changed their Twitter name and graphics to FactcheckUK during the Johnson/Corbyn debate. Many others condemned it. Bob Seely’s response to OnTheWight might be surprising 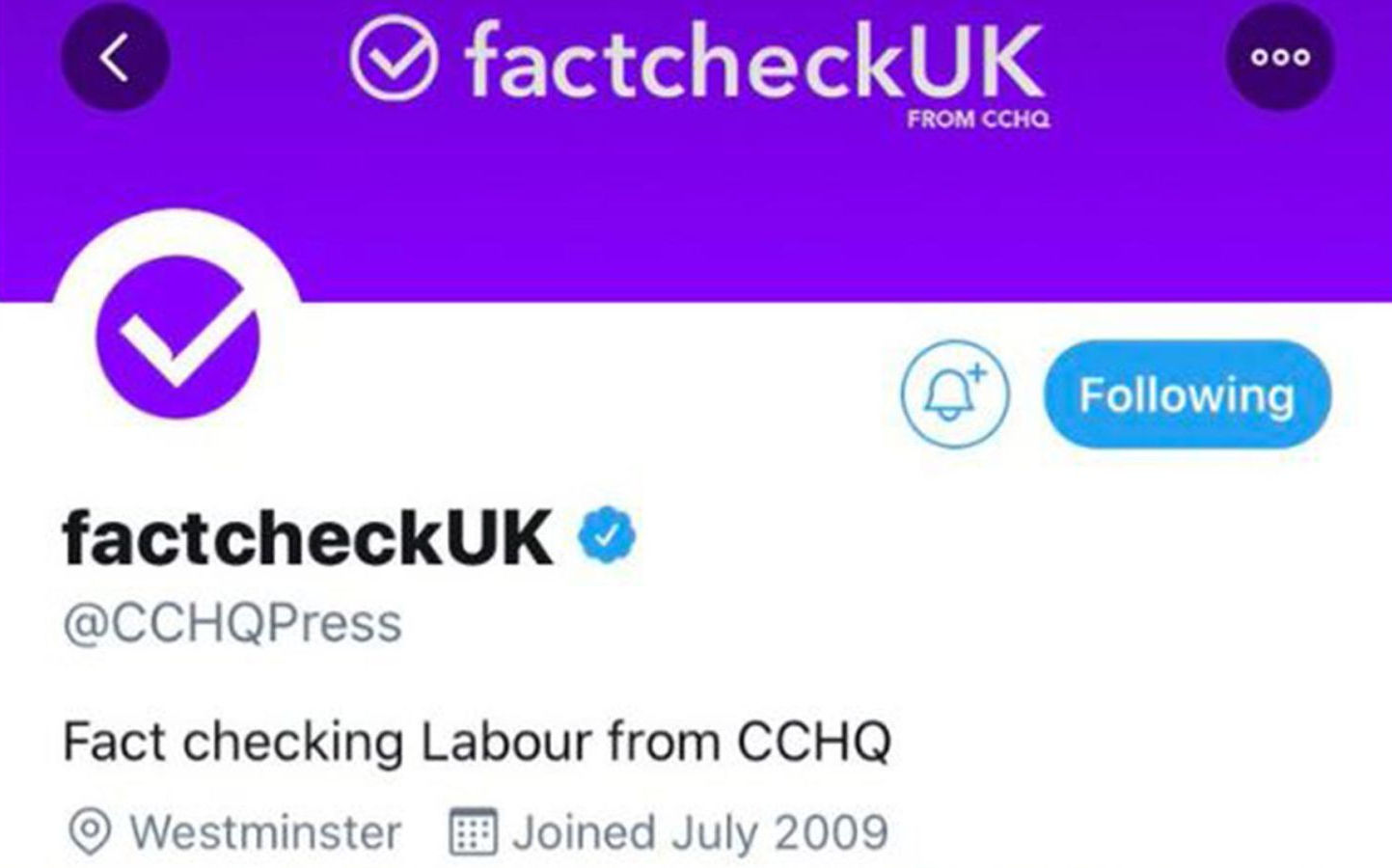 On Tuesday evening, during the General Election TV debate between Boris Johnson and Jeremy Corbyn, the Conservative Press Team at Conservative Central HQ (CCHQ) changed the name and branding of their Twitter account to ‘FactcheckUK’.

Condemned as “disingenuous”
They have been critisied by many for giving the impression they were an independent fact checking service, with Newsnight’s Emily Maitlis calling it “dystopian”.

Quite a few Conservative MPs when on air defending it.

OnTheWight got in touch with the Isle of Wight’s Conservative candidate to understand what his view was about the incident.

“Personally, I think we should play things with a straight bat.

“My chairman made a public statement last week calling for a positive campaign on the Island. I welcome that.

“We need to encourage a fair and open campaign, as opposed to some of the personalised and abusive nonsense and false claims that appears, often anonymously, on Social Media.”

Although no action was taken against the Tory press office, Twitter said it would take “decisive corrective action” if something similar was tried again.

22 Comments on "OnTheWight asked Bob Seely what he thought of CCHQ to FactCheckUK Twitter renaming controversy. Here’s his reply"

“Personally, I think we should play things with a straight bat.”

Well you would say that, once your Party is found out and called out for misleading and lying wouldn’t you Bob.

The Conservatives have proved themselves to be untrustworthy and unfit for office.

Perhaps attending public hustings might be a good start for an honest campaign?

Now why would you want to do that, and have to answer questions from the public you’ve failed? when the County Press will print all your political spin for the gullible for free, no questions asked.

Clearly Bob didn’t want to come under scrutiny last night at the Riverside…Maybe he was straightening out his bat and didn’t have enough time….

Must get some new reading glasses, I read that as public hangings!

Vote Up32-7Vote Down
grumpymoo
Of course this was terrible. Am I the only one who also found it slightly amusing? Glad they were caught out though. On a side note, during this campaign so far, BS is actually one of the only candidates that hasn’t become utterly vile towards other candidates. I’ve not seen anything terrible from the Labour guy, nor Daryl. The vile spew that has come out of both… Read more »
Vote Up26-9Vote Down
Rowan

When has Vix attacked anybody or come out with ‘vile spew’? I haven’t seen any evidence of that.

Straight Bat? How about being straight about your conflicts of interest with regards the Ferry companies Bob? Your cousin is a board member of Red Funnel. When will you move to “your” Island and be a permanent resident?

Is that a typo? Shouldn’t it be GCHQ?

“hey Bob, what do you think of the CCHQ fact check story?”
“Oh, good, you’ve come along with a photographer. Sorry, To answer your question, I don’t actually know Cheltenham too well and anyway it’s all very confidential you know. It’s important to be honest about these matters. Now, has anyone got a kitten I can hold for the photo?”.

dystopian- relating to or denoting an imagined state or society where there is great suffering or injustice.

Here’s the Electoral Reform Society, who campaign for improvements to our democracy.

Here’s what the Electoral Commission can do. It’s about campaign spending, not about what people say. They can’t take enforcement action against parties who use fraud!

Here’s how political campaign material is exempt from regulation by the Advertising Standards Authority:

The argument from Gove was that it was labeller”cchq” like everybody who isnt a member of the Tory party is going to know what meanx.people who actually have a life, that is.

Vote Up10Vote Down
Rowan
Well said Bob Seely. I don’t usually agree with what he says, but this is about the second time I’ve heard him talk what seems sense to me. What’s really worrying is that no legal action will be taken against Conservative Headquarters for what is basically fraud. Lying to voters should be something that gets politicians and political activists banned from public life. But the Electoral Commission… Read more »
Vote Up3-3Vote Down
Jenny Smart

Well that vile Vix woman with her little gang is just a bully, and Feeney, well he’s exactly the same, neither will do well I’m sure

Yes! Screams about democracy yet want another referendum, campaigning to remain, going against the previous result.
Let’s not talk about how they coerced the Lim Dems to step down, has nothing to do with ‘unite to remain’ all about Vix as usual. Removing a CHOICE for so many voters.

You left out the ‘p’, Limp Dems

Vote Up13-11Vote Down
Rowan
There’s nothing anti-democratic about wanting a second referendum. The first referendum was about a simple question – remain or leave – but without any detail about what either option meant, so we were voting in ignorance. Now we’ve got a deal that Parliament narrowly voted for, so it would be fair to ask us again. Democracy means knowing what you’re voting for. As for the accusation that… Read more »
Vote Up11-2Vote Down
Rowan

What evidence do you have of Vix being a bully? I’ve never seen any such thing.