Overflowing bins? The PFI service was ‘better than needed in some areas’, says Cllr Ward

Cllr Ian Ward has said the service level cuts to the PFI have happened due to the service being “better than needed in some areas”. 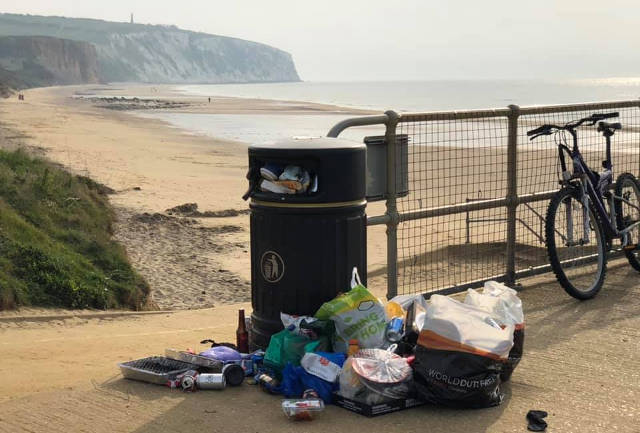 Overflowing bins on the Isle of Wight seafront could become a regular feature this summer, an Isle of Wight councillor has warned.

Following £11.4 million worth of cuts to the highways PFI contract, roadside bins will not be emptied as regularly — which could hit seaside towns during the busy summer season.

Andre: Town council doesn’t have funds to pick up tab
Councillor for Sandown North, Debbie Andre, said town and parish councils could not afford to foot the bill to clear away extra litter.

“The bay area is at the forefront of tourism on the Island. It was voted one of the best beaches in the country. Now we have got that accolade we should do everything we can to protect it.

“Sandown town council has not got the funds to pick up the tab for more rubbish collection.

“I am incredibly concerned about the impact this is going to have, and it’s an incredibly serious issue that needs more scrutiny.”

Ashman: Reduced service level
Island Roads service director Steve Ashman said although the level of service would be reduced, he was confident residents would continue to receive a ‘high quality programme’ of highways improvement and maintenance.

“I am concerned about this decision. Not just the bins, although that’s certainly bad, but also the unmaintained verges. We’re a holiday island, and our economy is dependent upon tourism.

“The image which we sell is of a neat, clean, beautiful place, with handsome Victorian towns, stunning countryside and some of the best beaches in the country.

“Overflowing bins and overgrown roads aren’t just an unpleasant eyesore, but a real risk to our economy.”

Ward: “The service was better than needed in some areas”
The cost-cutting plans have been drawn up by the Isle of Wight Council and Island Roads, based on advice provided by former highways PFI council officer turned private consultant Jay Jayasundara of Jasmine Consulting.

“These changes are an evolution of the original contract as we have discovered the service was better than needed in some areas.”

Mr Jayasundara was paid almost £130,000 for eight months work — and will remain on the council’s payroll for another year.

7 Comments on "Overflowing bins? The PFI service was ‘better than needed in some areas’, says Cllr Ward"

newest oldest most voted
Colin
The council has a trading standards department that warns us all of possible scams and organisations seeking to part you from your money with little chance of getting the service that you thought you were paying for. Perhaps they should have a look closer to home as the IWC continues to bill us all with increasing amounts of council tax for a diminishing return in service. They… Read more »
Vote Up570Vote Down
Colin

Yup, the bins will be an accurate relection of the Council Chamber; overflowing with stinking rubbish.

Vote Up450Vote Down
Phil Jordan
…but it was the very same man that developed and introduced the PFI that is now *informing* Cllr Ward that it was ‘better than we needed’. Does any of this make any sense? In general terms, the PFI contract deals with the Island in a uniform way and doesn’t discriminate between ‘areas’. Of course, we would need to know what is meant by “areas” . Contractual areas,… Read more »
Vote Up35-1Vote Down
alisonjane
The over-flowing rubbish bins were a direct result of thousands more people visiting + taking their Easter break on the Isle Of Wight. Which is a top tourist destination by the way. “The service was better than needed in some areas.” Exactly which areas were these Councillor Ward? Certainly not Sandown, Ryde or Shanklin, where rubbish bins are usually over-flowing all year round. What an awful impression… Read more »
Vote Up300Vote Down
bassgurusi
I would be interested to see how the council procured the services of Jasmine. Whilst the value is below OJEU thresholds, the council are still bound by PUblic Contract Regulations (2015). Given the ready availability of cost reduction consultancy services, it would seem naive (at best) to have directly awarded (in contravention of PCR) a contract to a party who is responsible in the first place for… Read more »
Vote Up25-1Vote Down
littlesausage

So does the fact the holidays season is well underway not bother them! 😠 we will be know as the filthy stinking isle soon. Then who will they blame when no one wants to come and everyone loses out!

I bet the residents of Sandown and those involved in the tourist industry are delighted by the way their local Tory Cllr Ward is supporting their town. They will also know, better, how to vote next time around. What a wally!