Heritage Gardens are seeking approval for two blocks of nine huts located along the embankment formed by the raising of Culver Parade. 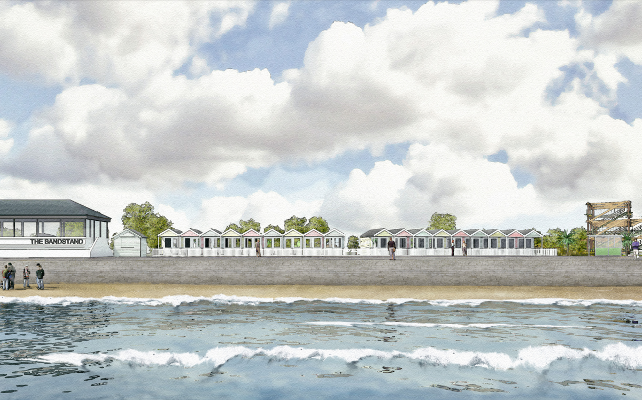 Plans for 18 new garden huts on Sandown seafront have been submitted to the Isle of Wight Council.

Heritage GB are seeking approval for two blocks of nine huts located along the embankment formed by the raising of Culver Parade.

The plans form part of the wider Sandham Gardens development, which will see a high ropes course and dinosaur themed golf course built in the park.

What they offer
The huts will have double doors at the front, with a sun terrace overlooking the beach.

At the rear of the hut will be a single door, opening onto a balcony with views overlooking the park and gardens.

Access to the huts will be along a 1.5m wide walkway, which will be enclosed by a low level picket fence.

The fence will have access gates at the end of each block to prevent people, children in particular, walking straight onto the footpath adjacent to Culver Parade.

Revised number of huts
Plans had originally been submitted in 2016 for 36 beach huts across the entire front of Culver Parade.

However, concerns were raised about the ‘excessive’ number, and how this would impact the views from the gardens.

By reducing the number, and condensing them into two blocks of nine, part of the seafront will remain open.

The huts could be up and running by the start of 2019.

Have your say
The full plans can be viewed online, and are open for comments until 16th November 2018.

Got to be an improvement.

And after the winter they will be a eyesore