Although the application has been submitted by the council, which owns the land, it will still be dealt with as any other application would. 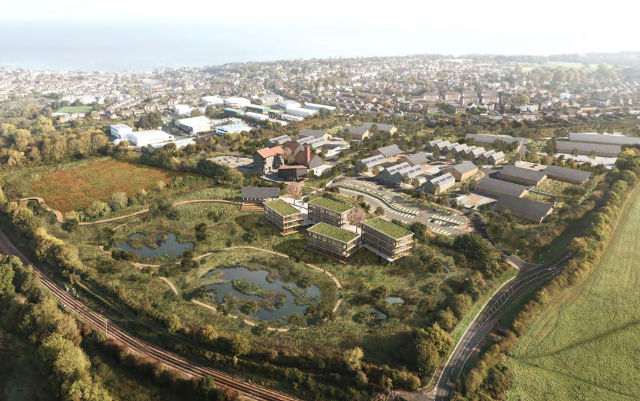 Plans to expand Ryde Business Park by building new homes, a GP surgery, gym and cafe have been drawn up by the Isle of Wight Council.

A planning application has been submitted by the council, as part of its regeneration strategy, to improve access to community facilities at the Nicholson Road site.

The proposals include 15 houses, a GP surgery and pharmacy, gym and community cafe, as well as new open spaces including a main square and garden.

First major regeneration project
Announced in December 2016, the Nicholson Road redevelopment was the first major project in the council’s regeneration strategy, aimed at bringing investment and jobs to the Island.

The plan is to expand the site, creating new jobs.

Companies based at the business park include Liz Earle, Travis Perkins and Sydenhams, as well as a Royal Mail delivery office.

A series of phases
If the scheme is approved, the project would be delivered in phases. The first phase would include the development of a community hub and landscaped route through the site, and the creation of ponds to help combat flooding.

Although the application has been submitted by the council, which owns the land, it will still be dealt with as any other application would.
Comments can be made online via the council’s planning Website.

A decision is due in December.

Which phase would deliver the 15 houses, please?

A lot of documents to wade through. I haven’t yet found the application to reroute right of way R55, or what the intended usage is for the land on the west of the site that it currently runs across.

Is it normal practice to remove the planning application after the public comment deadline? The IWCC web site now says “Planning Application details not available
This application is no longer available for viewing. It may have been removed or restricted from public viewing.”.