The Trail was set up to provide a positive, uplifting welcome to all on Sandown’s seafront, but some residents say that on the whole the impression is “morbid, maudlin and at odds with Sandown as a tourism destination where people go to relax, forget their worries” 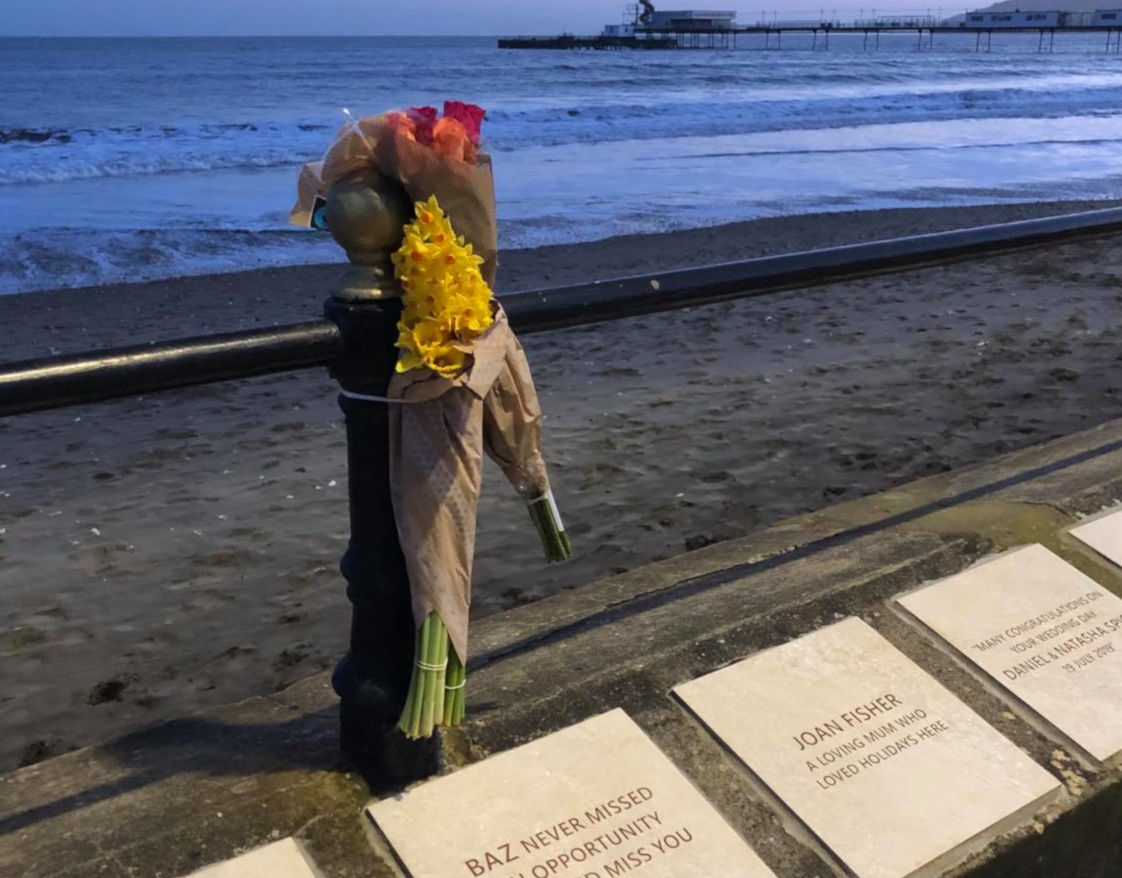 Questions are being asked as to how a series of engraved floor tiles cemented to a sea wall within a Conservation Area could have received approval from the Isle of Wight council.

Since 2015 residents have been invited by the ‘Sandown Honour Trail Association’ to pay £55 to have an engraved tile placed on the wall.

A leaflet for the scheme explains:

However, concerns have been raised over the addition of shrine tokens, including flowers, photos and painted stones along the wall.

“On the whole the impression is morbid and maudlin”
One resident told News OnTheWight,

“Whilst some have an amusing theme such as weeing in the sea, or being a geezer – on the whole the impression is morbid, maudlin and at odds with Sandown as a tourism destination where people go to relax, forget their worries.”

Memorial garden
They suggested that perhaps the Trail could be re-sited to a park, such as Los Altos, and a memorial garden created where people could remember their loved ones in a quieter, less public way.

Council approved
The Isle of Wight council say style of tile was agreed and they are aware that they are engraved by a local experienced engraver and are installed by local contractors.

However, Ms Perera says it was not the intended desire for any form of memorialisation to be part of the Trail and she stressed that this is included in the Terms of Reference.

News OnTheWight has written to the Honour Trail Association and asked what actions will be taken to ensure the Terms of Reference are adhered to.

Where are the profits going?
The leaflet explains that profits will be donated to local charities, but several Sandown residents, as well as News OnTheWight, have been unable to get questions answered from those administering the scheme as to where this money is going and who is controlling it.

“This original idea for the Honour Trail originated in 2013 as a result of the then twinning of Sandown Town Council (STC) with St. Pete’s Beach in Florida under the Sister City programme.  St Bede’s had set up a Honour trail on their seafront, which was extremely popular.

“At that time Sandown Community Partnership (the working arm of Sandown Town Council) undertook to scope the possibility of establishing the same for Sandown.  This was eventually arranged, in consultation with both the Isle of Wight Council and Island Roads.  When Sandown Community Partnership ceased the administration of the trail was taken over by Sandown Town Council.”

However, despite what the Deputy Chief Executive says, Sandown Town Council say they have nothing to do with the Honour Trail.

Questions to the Honour Trail Committee
Cllr Gary Young was Chair of the Committee up until the end of last year and Cllrs Merriweather and Cowley, plus one other, are thought to still remain on the Committee.

At the end of last year News OnTheWight wrote to the Honour Trail, but sadly they chose not to reply.

One resident told News OnTheWight today that town clerk, Richard Priest, had recently said to them that another 50 tiles were about to be installed.

44 questions to the IWC
Members of Sandown Hub Facebook Group have put 44 questions to the Isle of Wight council about the Honour Trail and its impact on the street scene. The questions were put to the John Metcalfe the council’s Chief Executive, as well as to Ms Perera and Chris Ashman, Director of Regeneration.

News OnTheWight will update readers once answers have been provided.

newest oldest most voted
Benny C
What an embarrassing pile of small town ineptitude creating a real issue out of a simple matter. 1. Clumsy, repetitive questions which blunt powerful points in terrible subjective phraseology and discredit the seriousness of the circumstances.(‘can children be dragged by the ears..‘ … words fail me). 2. A catalogue of mismanagement, factual fog, small mindedness and abrogation of responsibility which underlines all that needs to improve inside… Read more »
Vote Up42-5Vote Down
marknewman

Who were the numpties that thought celebrating dead people in a visible part of a holiday destination would be a good idea? The stupidity of this is a reflection of the town, who have seemingly allowed themselves to be lorded over by utter pratts! LOL

Terribly embarrassing helps, (along with the decaying buildings) to make Sandown look like a holiday town of a bygone age. No disrespect to all of those people who have been remembered, it’s a shame that they are being remembered in a place which is totally unsuitable. Sandown seafront ought to be upbeat and positive for a healthy optimistic tourism industry.

Vote Up16-2Vote Down
ianb811
How ridiculous, some people are so selfish. We have just added a plaque for my mum and dad, real sandown folk who contributed a lot to the town. My grandad was blacksmith in town and my uncle Stan commemorated on the memorial as he died as teen in the war. These idiots complaining need to get a life. I agree it shouldnt be a load of flowers… Read more »
Vote Up37-81Vote Down
tracy

People of all colours, creeds, races and denominations are entitled to express their opinions even on Island issues – not made to clear off, that’s not far removed from racist rhetoric and intolerance. Vote that up