Prior to the Regatta an informal ceremony was held as the club launched a new Coastal Four. 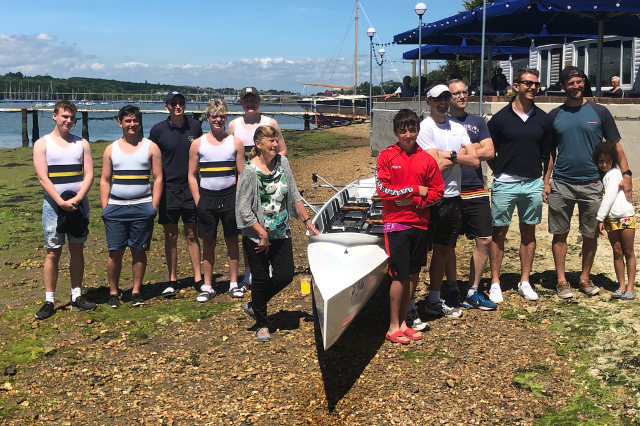 Prior to the Regatta the club launched a new Coastal Four, in an informal ceremony from their Folly based boathouse. The Four was named “Julie” after a major contributor.

The four was built by AB Composites of Cowes fitting out was only completed on the Friday evening prior to the launch. A formal naming ceremony will take place in the next few weeks.

Men’s Senior Four
On the water, the Men’s Senior Four, of Ollie Bottrell, Tom Hammond, Nick Christopher and Matt Allsopp, with Dan Sanderson coxing, were unfortunate enough to draw the eventual winners from BTC Rowing Club in their heat and this, coupled with teething problems with the new boat was to much to overcome and they were defeated in there heat.

Men’s Novice Four
The Men’s Novice four of Paddy Kearney, Sebastian McKeown. Charlie Walford and Harry Jones with Joel Smith coxing made the final of their event, but found the opposition too strong for them – finishing in third place.