In her role as national Green Party Education Spokesperson, Vix Lowthion took to the stage at the ‘Together For Education’ event as part of the rallying call to action across the country. 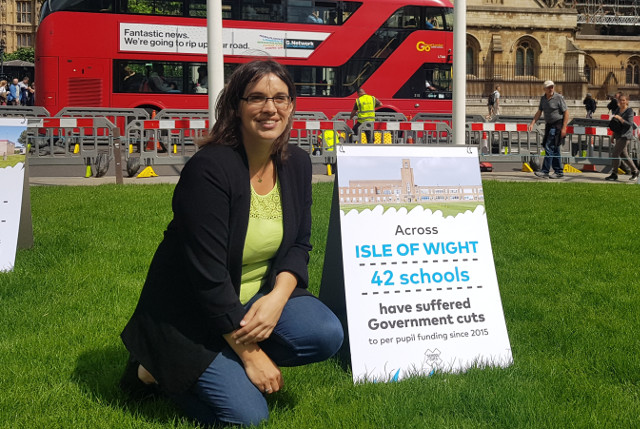 Over 400 teachers and campaigners filled Westminster Central Hall for the day long event, hearing how the Conservative government must increase the education budget to provide the most basic of services for Special Education Needs children, sixth formers and head teachers.

Isle of Wight budgets slashed
The last three years have seen 42 schools on the Isle of Wight have their budgets slashed, and activists took to the lawn outside of the Houses of Parliament to highlight the number of schools who are impacted by the cuts across England.

Lowthion: “Lost generation of SEND, disadvantaged and vulnerable young people”
In her role of national Green Party Education Spokesperson, Vix took to the stage in the afternoon as part of the rallying call to action across the country. She said,

“We haven’t been radicalised overnight. The story of government messing with our schools, our colleges, our nurseries has ramped up through the Conservative’s obsession with targets, data, testing and privatisation. This government’s legacy is a lost generation of SEND, disadvantaged and vulnerable young people. The government wants compliance, but we want to rebel.

“2019 is a year of change. A year of movements. A year of doing politics differently – and the People taking the power back. Today we have shown that Labour, Lib Dem, Greens and the wider public are united on this.

“We are Together For Education – and it is this unity which gives us strength.”

Find out more and watch speech
More information about how School Cuts are affecting our local schools can be viewed at School Cuts Website and Vix’s speech was recorded and can be seen on Facebook from 32 minutes in.