Ryde Arena skaters, hockey players and fans presented to Wight Ice Leisure the money they raised from whizzing down the Ryde Slide earlier this year. 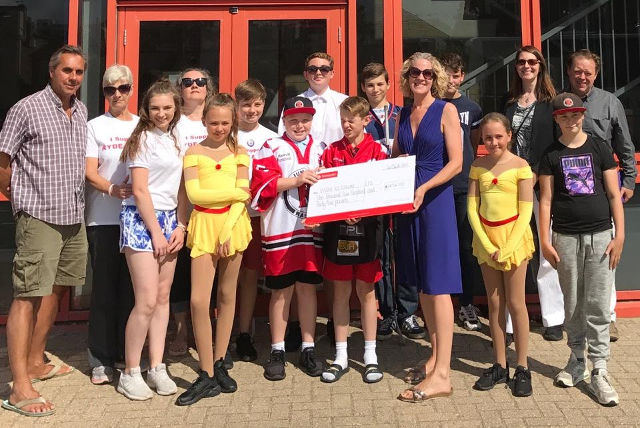 On Saturday afternoon, at a ceremony outside Ryde Arena skaters, hockey players and fans who were sponsored to slide down Ryde Slide in their skating kit presented a cheque to Wight Ice Leisure, the group created by the Ryde Arena Community Action Group (RACAG).

This adds to the £1,000 donated from the proceeds of Ryde Slide itself which was presented by Cllr Wayne Whittle at a ceremony last week.

Supporting Isle of Wight skaters
The money will support the campaign to bring skating back to the Island as soon as possible and the teams who are still competing so successfully in extremely difficult circumstances.

1 Comment on "Ryde Slide proceeds and sponsorship boost for skaters"

newest oldest most voted
iowdave
A very commendable effort. However, this is a drop in the ocean for what it will take to keep the arena going as a single event building. Surely Ryde deserves a theatre and it looks as though the old town hall will never be brought back into use as such. I don’t know the logistics, but could the Town Hall be adapted for use as an ice… Read more »
Vote Up00Vote Down