Sandown’s New Dinosaur Isle: When it could open and hints at who might run it

At an Isle of Wight council meeting this evening, it emerged when Sandown’s New Dinosaur Isle could open, clues to who might run it and it sounds like tens of millions extra could be invested 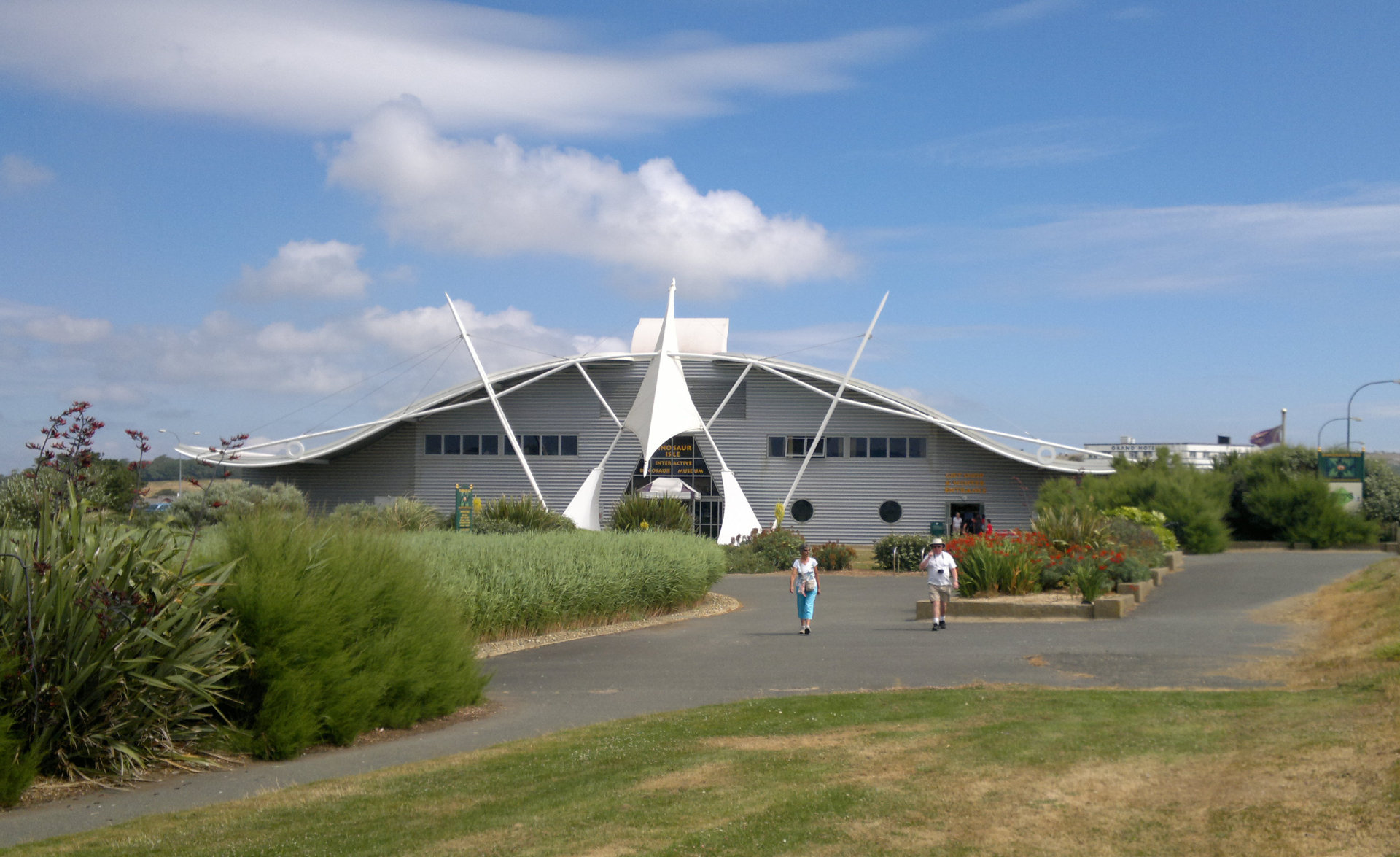 At tonight’s Isle of Wight council Cabinet meeting, as members discussed Dinosaur Isle, a hint was given as to who the major investor might be, when the new attraction might open and how much would be invested.

Leader of the council, Dave Stewart, introduced the item by reminding members that some time ago the council were looking at how best to dispose of Dinosaur Isle or develop it as an asset for the council.

Stewart: “Equivalent of our Disneyland opportunity”
He said the initial proposal had resulted in interest from a “very significant investor” which led to a visit to Portugal and other tender sites by council officers and the lead member.

Here’s what appears to be the only dinosaur park in Portugal.

Cllr Stewart described the project as “the equivalent of our Disneyland opportunity to have a dinosaur park”.

Opening date
It was revealed later in the meeting that the new dinosaur attraction could be opened by April 2023 – assuming everything goes to plan.

Cllr Hutchison (cabinet member for Resources) suggested the investment would be substantially more than for the build of a secondary school, which typically was around £33,000,000.

He said reviewing the Invitation to Tender would better secure and sustain the museum collection and museum accreditation in the long term. Cllr Whittle said,

“A review of the scope will ensure the integrity of the process is not put at risk of challenge while providing the best chance of a major new attraction for our Island.”

Cllr Paul Brading said was disappointed they were not further down the line of getting to preferred bidder status, but understood why and believed the paper would remove the final hurdle. He wanted reassurance the museum’s accreditation would be safeguarded and that all the PLUTO assets and buildings would be fully protected.

Cllr Whittle said they wanted to make it as great an attraction as they can. He said the issues raised are part of the dialogue and that there would be more public consultation in the future.

Protecting assets
Cllr Hastings asked how they could ensure the distinct heritage and environment located in the area is protected.

“Everything that is there that has got value to the community is heritage assets will be part of the plan. I think when you talk about PLUTO that is an attraction in itself that would benefit any other attraction. The heritage is always going to be looked after.

“We want to do something that will give that ‘wow factor’ back to the Bay.”

“We have a bidder who has come along and wants to invest more than the original invitation to tender.

“I think that’s a massive positive and I totally agree with the paper, if we have to adjust the process to make sure we are within the procurement rules, so be it.”

“We couldn’t have better apart from an actual Disneyland.”

Cllr Whittle said it would not be appropriate to discuss in advance of the review, but that

“The proposals are extremely ambitious and will put the offer on a different level in terms of national and international significance, going way beyond what we thought possible in the original IIT.”

All cabinet members voted in favour of the recommendation.

Image: jpennycook under CC BY 2.0

13 Comments on "Sandown’s New Dinosaur Isle: When it could open and hints at who might run it"

newest oldest most voted
beacher
That’s a very rose tinted report Sally, scrutiny committee would seem to indicate that it’s all going wrong and going back to officers to review as it unlikely that the bidder wants to invest the sort of money required. Seems to have been a well scripted pantomime ..in the mean time the community asset that was Browns has been shut down . The Pluto pipeline ‘shed’ is… Read more »
Vote Up33-9Vote Down
kirkauld

While it is important that we have investment on the Island I note the paragraph noted below
“We have a bidder who has come along and wants to invest more than the original invitation to tender.“
Nobody invests money for nothing and not being privy to the invitation to tender I wonder exactly they are/will be proposing and what they want from the council i.e. we the Island community

Vote Up25-4Vote Down
truth
Lots of questions. For a start, who paid for this trip to Portugal? Expenses, or did the theme park pay for it, in which case, does that tally with council rules? I’ve looked at the Portugal theme park, lots of fibreglass dinosaurs, more like Blackgang than Disneyland. What none of us know is the natural flora and fauna that exist there, and the impact of hundreds of… Read more »
Vote Up27-7Vote Down
Benny C

Side show. At least they’re doing the due diligence. Next, someone will be moaning that no one went to see what was coming.

Vote Up20Vote Down
Tamara
This flood-prone site would be ideal for recreating a Cretaceous swamp, inhabited by water-resistant robotic dinosaurs. Visitors could travel around it in boats – except in summer, when water may have to be imported from somewhere on the mainland, or visitors could wade through the mud in for-hire wellington boots. Meeting life-like, moving dinosaurs close-up and in their natural environment would be an educational experience, as well… Read more »
Vote Up23-5Vote Down
Tamara

A Disney-type theme park on this site? Would anyone invest a huge sum of money building not only in a flood plain, but also on the coast, with sea levels rising? Dinosaur Isle needs rebuilding on higher ground. Its collections are too important to be sited here.

Vote Up21-5Vote Down
Benny C
Why would they build on an island when 95% of the potential revenue stream is on the mainland. This will need heavy subsidy to get visitors here and clearly they will then spend in the hotels and restaurants, pushing money into the economy. In principle, it’s ok. But the devil will be in the detail and this council are awful at detail, either deliberately or because they… Read more »
Vote Up5-1Vote Down
uosf9

Vote Up18-2Vote Down
Colin
Oh, dear, oh dear, oh dear, is there an election coming up? Is it any wonder that “people” come up with ideas as to what is going on? Given the track record of the IWC for failing to maintain it’s properties and the appalling record when it comes to disposing of them, “people” have every right to wonder. The experienced article writer seems to think that this… Read more »
Vote Up19-4Vote Down
Angela Hewitt
Unfortunately Wayne Whittle has no concept of heritage. We need names of who went on the “jolly” to Portugal. Isn’t the Portugal one owned by the German company that has backed out of this investment for being too close to the sea etc? Why doesn’t the council sell it’s vanity mainland investments which have given us a paltry return and invest it into the Island including Browns… Read more »
Vote Up21-9Vote Down
Benny C
Because selling now into the teeth of uncertain market conditions (which in many sectors is pricing property at a silly discount due to forced sellers) will just crystallise the losses. If anything, now is looking like a good time to buy. Lets just give it all away shall we? Wait til the market improves, then sell. The bigger point is the morality of diverting resource away from… Read more »
Vote Up80Vote Down
chartman

Vote Up120Vote Down
septua
All of you who have commented appear to value Dinosaur Isle and would like to see it continue to exist, possibly on a better site. Dinosaur Isle is the Island’s geological and paleontological museum and is very popular both on the Island and by mainlanders who visit, and it could easily sit as part of a larger complex like that in Portugal or Germany. If you want… Read more »
Vote Up3-1Vote Down