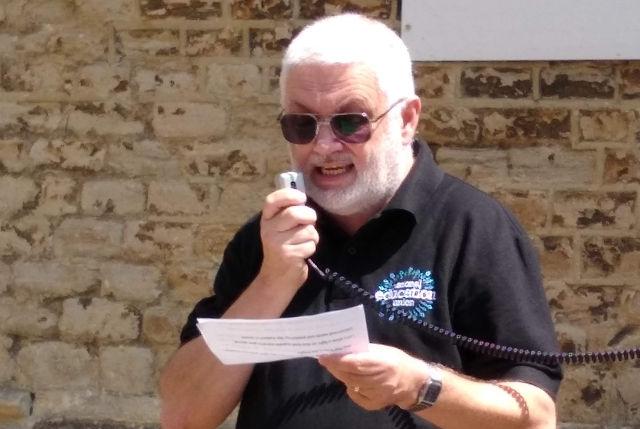 Peter Shreeve, local joint secretary of the National Education Union shares this report from today’s SEND demo in Newport. The Isle of Wight council have previously stated that they have “responded well” to the SEND crisis. Ed

On Thursday 30th May parents, students, teachers, support staff and trade unions met in St Thomas’ Square, Newport to raise concerns over a ‘local scandal’ that 100s of Island children with special educational needs and disabilities (SEND) were being failed.

The “treacle of bureaucracy”
No-one thinks the reformed SEND system is working and there is a clear disparity between what the Government wanted to happen and recent parental experience.

What caused this poor experience?  According to one head teacher survey – sustained and deep cuts!

Loss of 28% of funding
Since 2015, nine out of ten local authorities have lost out on vital funding for children who need the most support.

Ofsted: A national scandal
Last December in her annual report, Ofsted chief inspector, Amanda Spielman highlighted SEND provision as ‘a national scandal’ It is also a local scandal.  Between 2015-19 the numbers of students with EHC plans has increased by 65%.

In addition, the numbers of Island pupils with EHC plans not in school have more than doubled since last year.

This May, at the final hearing of the House of Commons Education Select Committee’s yearlong SEND inquiry, SEND minister Nadhim Zahawi said repeatedly about provision: “It’s a journey.”

Let’s shine a light on this local scandal
If SEND success is a journey, it is one with no end in sight and what’s even worse is we are driving in the dark with one headlight and that’s none too bright.

Let’s shine a light on this local scandal and let’s give special educational needs and disabilities the support it needs!