Today’s transport report has delivered a list of recommendations for Island Line including ensuring Island Line remains part of the franchised National Rail Network. Here’s the detail and the reaction. 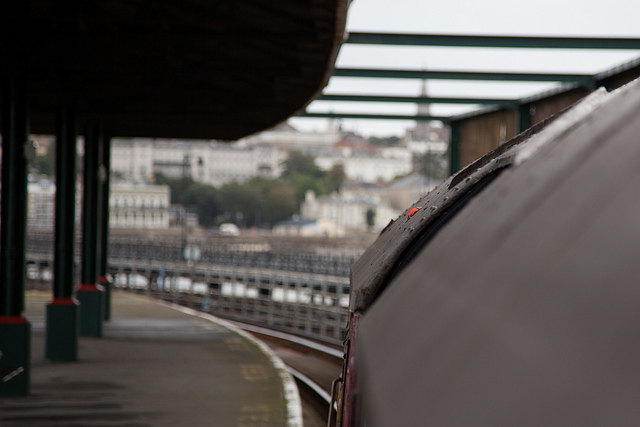 From 23 August this year, the franchise for Island Line will be in the hands of FirstGroup and MTR (as part of the wider South Western Franchise).

At the moment only one of the two services per hour connect with the ferry. Following discussions with stakeholders, IW Bus and Rail Users’ Group (IWBRUG) and KILF stated wished to see Island Line run a 30-minute schedule to meet onward connections across the Solent.

“I’m already working with the new operator to ensure that the Island Line is improved.

“As part of that, we need to upgrade our Island’s gateways, including our railway stations.”

“By recommending that the Isle of Wight Council fully engages with First MTR (as the new operator) to bring about the modernisation of Island Line, the Taskforce has effectively endorsed the need for service to remain in the wider franchise. This is very welcome.

“It is particularly welcome in light of the Taskforce’s Chairman – Christopher Garnett – having stated in his earlier report on Island Line that ‘there does not appear to be any clear logical arguments for Island Line being part of a wider South Western Franchise’. This assertion caused much concern at the time, leading the IW Council to formally disagree with his conclusion in this regard.

“It is therefore a major step forward that Mr Garnett has not sought to replicate this view in the Taskforce’s work – nor propose, as before, an unworkable and impractical alternative of a tram – and has instead made a recommendation of working with the new operator of the wider franchise. This is a victory for KILF and all those who have campaigned since 2015 against the plans of the previous MP and his transport adviser to remove Island Line from the security of the wider franchise.”

“As a member of the Isle of Wight Council, I look forward to working in support of these recommendations over the coming weeks and months. I endorse the Taskforce’s view that more modern rolling stock is needed, along with a half-hourly service and investment in the future sustainability of the line.

“The focus of the Council, its partners and the Island’s new MP must now be to persuade the Department for Transport to support First MTR’s proposals to deliver these improvements, and ensure that funding is made available – through adjustments to the franchise agreement – to take these forward in a timely manner.

“The KILF campaign does not stop here. Our efforts will now focus on securing the long-term future of Island Line through these improvements, and in doing so, making the line more sustainable.

“Our campaign has achieved a lot over the past couple of years – including getting the Government to back down on their plans to turn Island Line into a ‘separate, self-sustaining business’. We must now finish the job off – and secure a fit-for-purpose Isle of Wight rail service.”

This is an amazing opportunity to create a wonderful tourist attraction, what vintage/steam/novelty railway does not attract visitors?
We could run classic trains, go green and have annual competitions for ‘green’ locos, extend the line so it is a real table-top train set.
People say ‘fit for purpose’ but what is that purpose?

At the Island election hustings Mr Seely promised to press for extension of the Island Line, including to Ventnor. I wonder how he is getting on?

Interesting that Chris Quirk mentions a half hourly service, it would be great to have that on the ferries as well 24/7.

I wasn’t aware of Bob Seely’s commitment to extend the island line, reversing the Beeching cuts would be good as would upgrading the infrastructure to take modern mainland size stock