Undercliff Drive: A novella by John Goodwin: Part one: The angry sea 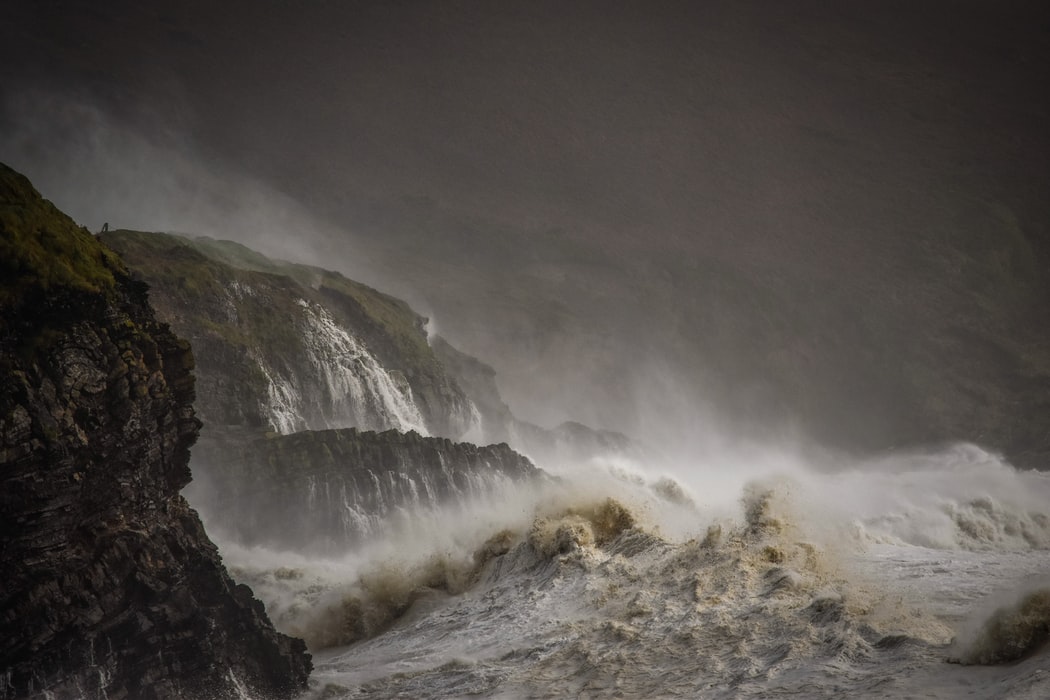 The grey sea has been angry all week. In demented rage it smashes into the sea wall. One more huge blow will surely bring it crashing down. Waves have also devoured the sand scouring it out to reveal black base sand strata patches. The tips of some waves fly higher than ever carrying flecks of foam way onto the coastal path where they dissolve in the puddles.

High above the sea in a local beauty spot, Harry is standing in his garden. His house is one of a handful of buildings in the area. He’s dressed in a woollen dressing gown and slippers. Rain pours down his neck and his slippers are soggy, but he’s barely aware of this. It’s ten past seven on a February morning. It’s first light, if light there is. He’s not had the best of night’s sleep. The sound of the rain on the roof of his house and the wind in the trees in his garden has kept him awake for hours.

In his hand is a wooden spoon that he’s taken out of the kitchen drawer. He bends low and pushes the spoon down into a black crack that’s appeared in his front path.

Across the road his neighbour, Doris, watches him from her lounge window. Later she goes out into her garden and walks to the base of the upper cliff to pick some primroses.

‘They’ll cheer up Edward,’ she says to herself imagining them in a lustre vase on the lounge table.

In a brief dry spell Doris joins Harry by a stretch of the road that’s had deep layers of tarmac scraped away by a huge mechanical digger. Harry stares at a giant concrete beam that lies in the bottom of a deep pit that the digger has dug.

‘Why did they have to do this here?’ says Harry. ‘Completely useless.’

Half-formed words stick in Doris’ throat. She opens her lips but can’t articulate a single letter.

‘Surely it’s the weakest part of the road? Exactly where the fault line is,’ says Harry.

Doris is very aware of the position of the fault. It’s just yards from her family’s house. She reaches the safety of her garden where she ducks behind a big oak tree searching in her pocket for the front door key.

‘By the way we’re in the red zone of rainfall for the last month. I just hope the road will last long enough for me to get rid of the house. I’ve got a second viewing in the morning.’

Once in the house, she sees that her husband Edward is still stretched out asleep on the settee in the lounge, just as he’s been for most of the night.

‘He looks so peaceful, best not to…’ She goes into the kitchen and puts the kettle on and takes out a packet of ginger biscuits, Edward’s favourites.

Hours later daughter Marion comes in through the front door. She hangs up her wet jacket on a peg on the kitchen wall.

‘Don’t say it broke down again.’

‘So where is it ?’ asks Doris looking out of the window.

‘Just some nonsense,’ replies Marion taking off her trainers.

‘What nonsense is that?’

‘The police asked me to park by the wall.’

‘Just got to sort some stuff for tomorrow.’

Then she disappears up the stairs to her study bedroom.

‘Something’s wrong,’ she says to herself. ‘Why doesn’t she want to tell me about it?’

Before she knew it, she’s standing up and places her foot on the first tread on the stairs. She climbs the rest slowly trying to work out what to say to her daughter.

‘What do you want?’ comes a quiet reply.

Doris slowly opens the door and resolves to be brave.

‘Approach it gradually,’ she says to herself.

Inside the room Marion is sitting on the bed next to a pile of children’s homework books. Doris walks across to the bed, carefully lifts the books on to the floor and sits down next to her daughter. There’s silence in the room except for the feint tick of a clock. Doris gently takes hold of Marion’s hand, takes a deep breath and asks quietly.

‘Was it just your car at the wall?’

Marion withdraws her hand and says, ‘I don’t want to talk about it.’

Doris sighs and mutters, ‘It won’t go away love.’

Marion picks up the pile of books and puts them back on the bed saying, ‘Please Mum, Ofsted are in school tomorrow and they’re bound to be in my lessons. I need to be ready for them. I’ve still got loads to do.’

Doris kisses her daughter on the cheek and says, ‘Don’t overdo it Marion.’

Then she heads off downstairs and makes Edward’s tea. She sits in the kitchen for the rest of the evening and reads a book leaving Edward to watch TV in the lounge. Doris is just turning off the lights to go to bed when a pale looking Marion comes into the room. She gives her Mum a hug.

‘Sorry Mum. I didn’t mean to be rude to you,’ she says. ‘But I’m as ready as I’ll ever be for the dreaded dragon that’s coming to invade us tomorrow.’

‘You do too much for that school. I just hope they appreciate all your efforts,’ says Doris.

Marion sits at the table and says, ‘Harry’s van, Lily’s old banger and Jack’s sports car were parked at the wall tonight.’

‘What was the policeman doing?’

‘Trying to cope with Lily’s anger.’

‘She got a strop on. Told the policeman that she couldn’t walk all the way to her house…not with having to carry all her shopping.’

‘He threatened that if anyone nicked his prize possession the police would have to foot the bill.’

‘So the police are worried our cars would be trapped if they came any closer.’

‘Let’s hope it doesn’t come to that.’

‘All we talk about every single day is the road. I’m sick of it. I just wish we lived somewhere else.’

‘Take each day as it comes. Be strong…but don’t say anything about this to your Dad. He’s got enough trouble as it is.’

‘Tidy the kitchen, making sure all the crockery is in the dishwasher…done.’

‘Move the cupboard to hide the damp patch in the hall…done it and still have the backache to prove it.’

‘Check the radiators are all on…especially the dodgy one in the bathroom… can’t have the house freezing.’

‘Don’t forget the coffee in the Boden and bread in the home bake…make it homely…make them feel welcome and if you’re lucky they might buy.

‘What was that? Sounded like? Not sure. Listen. Keep very still and concentrate. Nothing. Might have been a sea gull on the roof. Might have been the wind in the trees. Get back under the duvet. Try to go to sleep. There it is again. A sound coming from the roof. A creak. But old roof timbers do creak don’t they?’

Image: Louise Hill under CC BY 2.0

3 Comments on "Undercliff Drive: A novella by John Goodwin: Part one: The angry sea"

Yep, enjoying this. Having lived in Ventnor myself until very recently, it all feels quite credible. In terms of writing the characters/plot/action interweaved as they are, make this a serial engaging enough that I’d like to follow through on. Another reason to be still checking out OntheWight.