The 125 year lease for the Ventnor Botanic Garden has now signed over to the Community Interest Company that will run the Garden.

Thanks to Rosemary from the Friends of the Ventnor Botanic Garden for this news. In her words. Ed

Last night in a flurry of activity, two law firms completed the signing of a 125 year lease for the Ventnor Botanic Garden (VBG) by a Community Interest Company. 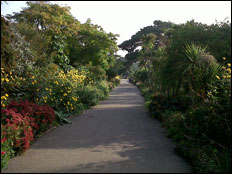 John Curtis, Director of the CIC signing the lease with the IoW Council said, “This is one step – we have many, many more ahead of us. We finalised the transfer with minutes to spare before the busy season, so we are scrambling to finish our new entrance and putting the final touches on our pricing.”

“We have been working hard to secure the future of the Garden and now we can return to developing its potential,” said Phil Le May, Chairman of the Ventnor Botanic Garden Friends’ Society.

“It is a new day and a new opportunity for the staff,” commented Chris Kidd, Curator.

Listen to a VB interview with John Curtis who will be heading up the VBG CIC.

Best wishes to the garden team. This is a gem on our island . The entrance fee will be fantastic value for such an attraction.

Hooray.
Best wishes to all the great team at the Garden.

Vote Up00Vote Down
nightshot
Great news, fees for land once held by a dept of state, given to a council, and now to be used to charge the true owners (the public) entry Looks like Ventnor park is going to become busy for a while, along with the road that serves Ventnor park, this will become quite an issue if that road becomes as bad during the week as it is… Read more »
Vote Up00Vote Down
witchfinder general

The true owners (the public) never really had free access, we all had to pay for it through the council tax. Now instead of everybody subsidising your walks, only the people that use it pay. Seems fair to me. A bit like public car parks really.

The gardens now have the opportunity of becoming a premium place to visit. I wish them luck.

Vote Up00Vote Down
nightshot
” Now instead of everybody subsidising your walks” Was that for me WG?, I suppose my enforced payments for council tax are irrelevant then?, taking your logic, should you use the NHS everyone else should not subsidise your treatment, thats fair isn’t it? public utilities and public amenities are for all, parks, toilets, schools, refuse etc, using your logic only parents of children should pay for schools?,… Read more »
Vote Up00Vote Down
Just sayin'

I find it strange for the report says “two law firm completed the signing …”. It’s completely natural for a each party to an agreement to have legal representation, but their role normally isn’t mentioned, but for the fact that they’re always present. Wonder why it was highlighted this time?