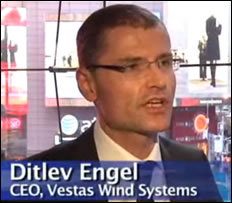 With today’s shocking news about Vestas announcing so many job layoffs, we’ve dug deep to find some information to make sense of the news.

The US is Vestas’ biggest market and 32% of their current share capital (before the new share issue was announced today) is held in the US.

They’re investing over $1 billion dollars in new manufacturing facilities in the US. They currently employ 1,300 people in the US and have announced that they will expand this to 4,000 people over the next 12 months.

In the last two years over 35 wind turbine companies have been created in China alone.

Engel said that “this is changing the dynamic of the global market.

Vestas 24% growth
Growth was 24% and Engel said that Vestas “couldn’t grow much faster,” continuing, “if we had grown more that 24% I was afraid that we would have stumbled because we would have been running too fast.”

Demand is strong. Banks not helping
Engel goes on to make it clear that demand is very strong for turbines, “I’ve never seen in the US and elsewhere such a big emphasis – from the politicians – on really growing new types of energy.”

He went on to describe where the problem lies, “However, if the banks are not doing their job in helping the customers to get things off the ground, that is holding it back. So the answer is, really once things start flowing again and the banks are getting involved, good things will start to happen.”

We’ll continue to bring you news on this as soon as we can. For instant updates, Follow VentnorBlog on Twitter.

2 Comments on "Vestas Chief Talks On The Company’s Future"

newest oldest most voted
Pete
500 jobs in an isolated population of 138000 that is catastrophic given the families and supplier businesses dependant upon those jobs . I dont expect to see any Ministers hot footing it over here though. But seriously, i do believe that the issue of Island infrastructure, Wind Turbines,Ferrys,Roads, the list goes on, needs addressing by all of us, individuals and powers that be. Else no-one, except the… Read more »
Vote Up00Vote Down
Graham Petersen
Obviously agree with the comment about this being bad news for the island. Doesn’t mean we have to take it lying down. One problem appears to be that there is no union organisation on the Vestas sites. The workforce need the collective orgdanisation a union can bring now more than ever. It wont guarantee success but will help to mobilise the workforce. Look at the example of… Read more »
Vote Up00Vote Down