Vix Lowthion, who increased the Isle of Wight Green vote 10x at the 2015 election, has just been selected as the Green Party’s National spokesperson on education.

Read and contribute to the 37 readers' comments ↓ 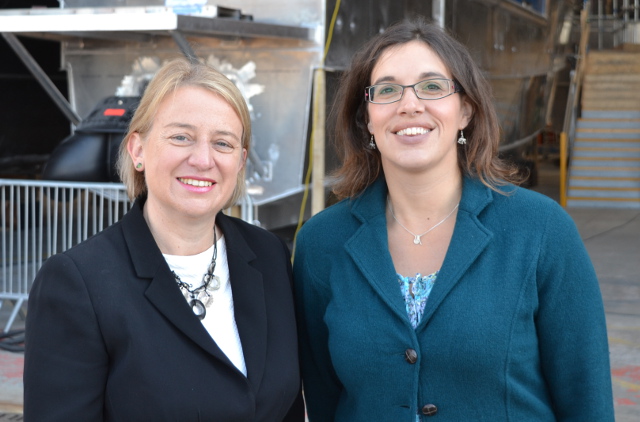 Vix Lowthion’s first entry into Green Party politics was when she stood as the Green candidate on the Isle of Wight in the 2015 General Elections.

Come 8th May, the day after the election, it transpired that she’d increased the green vote on the Island by a factor of ten, from 2010.

She was later selected as the leader of the Party on the Isle of Wight.

National role
Now, the National Green Party has just announced that she’s been selected to take on the role as their spokesperson for Education.

“It’s such an honour to take on this enormous brief after a relatively short time in the Green Party.

“From an Isle of Wight point of view, improving access and standards for education is very much a priority.

“I am really looking forward to translating our policies into action and leading our schools and colleges and universities towards an improved future for our young people.”

“We’re delighted to unveil this list of talented, passionate spokespeople whose expertise can only help boost the party’s reputation and help draw even more attention to Green Party values and policies.

“I am proud that nearly 60% of our new spokespeople are female, that a quarter of our spokespeople are people of colour or from minority ethnicities and that an eighth are LGBTIQ. This is a reflection of the Green Party’s commitment to promoting diversity and inclusiveness at all levels.”

Now get yourself on a parish council and make a real difference.

Well IWC then. It’s easy to be an arm chair critic.

Vote Up00Vote Down
the shadow

room for thought parish councillors dont get paid iw councillors get sum now a M.P get lots may be just been a councillor has no appeal to her as she wont get enough £££££

I was a parish councillor for several years on the mainland, so I talk from experience of their toothlessness. via-a-vis local officers and councillors.

Cicero, parish councils have changed. You need to update your knowledge. In your time they were jolly little clubs, alas no longer. How often do you attend a parish council meeting?

Parish council decisions are still ignored by the planners, despite having Neighbourhood Plans authorised by local referendum.

Vote Up00Vote Down
sam salt
How right you are. At a recent meeting attended by the Chair of the Planning Committee and the Officer in charge of Planning the following was said and minuted. A member at the meeting said that they found that secondary importance was given to Neighbourhood Plans when they should be equal to Island Policy. (This person is a serving Isle of Wight Councillor). Wendy Perera the officer… Read more »
Vote Up00Vote Down
Cicero
IMO the Head of Planning’s statement about “lack of training” is specious and the IWC planning management should review their performance since 2011. Presumably Planning Inspectors making decisions on appeals (often remotely) have received training on NP and the Localism Act 2011? To remind them, the government’s Planning Practice Guidance states: “Neighbourhood planning gives communities direct power to develop a shared vision for their neighbourhood and shape… Read more »
Vote Up00Vote Down
Vix Lowthion
The shadow – I don’t get paid for this role. I’m currently in London for a 2 day Reem Party masterclass and not only do I not get paid for this I get no expenses either. I am certainly not looking for a gravy train. In fact I have been approached to be on parish councils (x2) in recent months and I have wanted to accept but… Read more »
Vote Up00Vote Down
the shadow

if you haven’t got time for a town council how would you fit in as a M.P

If I was an MP I wouldn’t need to do another job. I could give my working time as well as community time to that role.

Find the time. It would help you enormously to have had the experience of being on Councils at various levels. That would enable you to better understand the problems involved both locally and in Whitehall, and I’ve you more credence with potential voters. Remember, if you want something done, ask a busy person.

Sorry, typo caused by cat walking over keyboard.I’ve should read ‘give’.

Thank you Septua – I fully intend to do this but at the moment I have students to get through their A levels and they’re my first priority.

Great news. That should give us a break from the green ravings for a bit.

Wot Lurcio said. Education spokeswoman seems an ideal position for her – she’s perfected the santimonious tone and is extremely able to talk down to virtually anyone, in the virtual world.

Time to go get elected and actually lay claim to all of that self-righteousness instead of acting as our unelected, nil-responsibility spokesperson for nought.

Well said TC, my sentiments exactly. I wonder if a seat became available on the mainland golden girl would stick around?

It doesn’t work like that with the Green Party. It’s a ground up approach and the candidates are selected by the local party not the national one.

There is no better place to stand for the Greens than the Isle of Wight so I am not going anywhere.

But Caroline didn’t start off in Brighton, did she, Vix? Wasn’t she a County Councillor in Oxfordshire?
You wouldn’t go elsewhere if they asked you?

As Ive posted elsewhere, Well Done Vix…
Now you just need to be our MP then on to being PM in due course, as I have predicted before, so mark my words …

“Although we feel we are free, in reality, we—like the politicians—have become the slaves of our own desires,”

I thought that Vix was very credible during the election process and is by far my preference over the other “Education Spokesman” I know of on the Island.

Haha, excellent , Cllr Hillard. Mind you, your example is not setting the bar very high?. Oops, sorry, RH says not to mention the bar…

Are you referring to Councilor Bacon??

Below the belt Albert. Cllr Bacon is working tirelessly for the Island.

@ Islebe I was just trying to get some clarity from Councillor Hillard rather than having a dig at Councillor Bacon.

Personally I would like to see Councillor Bacon exercise some authority.

Vote Up00Vote Down
Jon Thorne
Green ravings? Like attempting to find solutions to the myriad of problems the world faces from the self serving corrupt politics of greed, war and environmental destruction I’ve witnessed across my entire lifetime. Our current MP is almost entirely useless. Vix would be a marked improvement. I’m amazed at the quantity of venal comments that appear under articles like this. Trolling is cowardice pure and simple. Put… Read more »
Vote Up00Vote Down
Charlotte

[Pay no attention to the “haters”. What have they done that can even come close to what you have achieved?]

Vote Up00Vote Down
Allie
As a parent of a pupil doing A Levels at college and someone with an awareness of Town Council workings I want to commend Vix’s decision not to stand for town council yet. She is investing in the education of our young people (something that is seriously lacking) and as well as teaching I know she is inspiring them to think about the future, our Island and… Read more »
Vote Up00Vote Down
Diogenese's barrell

Unfortunately the only way the island could benefit from her skills is for her to become the Conservative candidate.

Whether or not I agree with her policies, at least Vix posts without the need for pseudonym ( alongside Phil Jordan ) in my opinion this deserves some credit.