The rich history of Isle of Wight innovation will be celebrated through this new collaborative project, the brainchild of Cllr Michael Lilley, as the story of the Black Arrow Rocket is told in local schools on the Island. 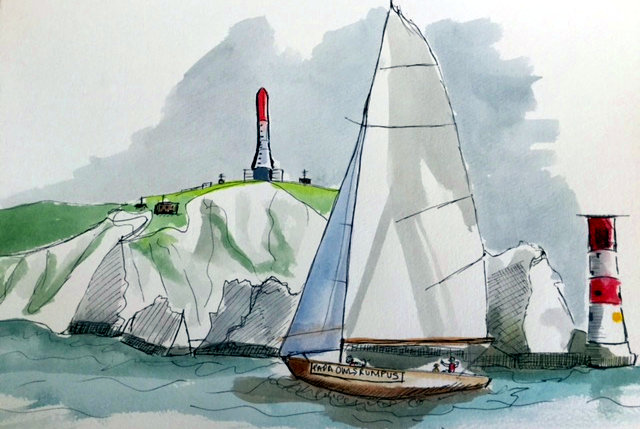 Michael shares this great news on behalf of the Isle of Wight Aviation Museum. Ed

The same day as it has been announced that the Black Arrow Rocket is to be returned to UK after 48 years (read the news here), Wight Aviation Museum announces the Rocket Island Project.

Black Arrow was built at Saunders Roe (now GKN) in East Cowes with testing at the rocket site at the Needles. The Island-made rocket was launched in Australia in 1971 and successfully launched the Prospero satellite which is still in space.

The Rocket Island Project
The project, the brainchild of Isle of Wight councillor Michael Lilley, is to tell the story of the Black Arrow Rocket in local schools on the Island, thanks to a National Lottery grant of £9,900.

Michael is a founder Trustee of Wight Aviation Museum and recently-published a children’s book “Papa Owl goes to Rocket Island”.

“It is fantastic the Black Arrow is coming back to the UK after 48 years to UK. I would have preferred it to have come home to the Isle of Wight where it was built. We need to celebrate this wonderful achievement.

“The Isle of Wight was Rocket Island from the 1950s to 1970s. It is fantastic that this National Lottery grant will enable us to tell this amazing story in our local schools. I am a governor of Dover Park School and the Year 5 children there are already designing a Rocket Island school’s programme that will be rolled across the Isle of Wight over the year”

“This project is enhancing our children’s skills, knowledge and understanding across the curriculum and we are extremely excited to be a part of it.”

Wight Aviation Museum based in Sandown is putting the final touches to a full sized replica of the Black Arrow Rocket which will be displayed at Sandown Airport.

Through the school project, local school children can visit the Museum and how rockets were built on the Island, as well as all about rocket science.

“My Dad was Professor of Aeronautics and Astronautics at Southampton University during 60s, 70s and 80s. He died in 2015 in Ryde. He would have been 100 this year. He was a Chief Scientist at NASA in his 80s and I was brought up with rockets.

“I wanted to make sure local children had the chance to find out about rocket science, how they are built, learn about space travel, and that their Island was a real rocket island. I hope that many are inspired to be inventors, innovators, engineers and scientists. I would like the Island to start making rockets again which would create jobs for our children in the future.”

Educational programme
The project involves volunteers from the Wight Aviation Museum working initially with Year 5 children in Dover Park School to design class teaching plans and materials. This teaching box/programme will then be available to all local schools.

I see that The Daily Telegraph, in reporting this story, committed the common sin of saying that it was launched from the island!
Anyway, good luck to all involved.