The IW CPRE say what has taken place in this ancient woodland is a form of rural vandalism and IW Ramblers say the site now resembles a shanty town and tip. 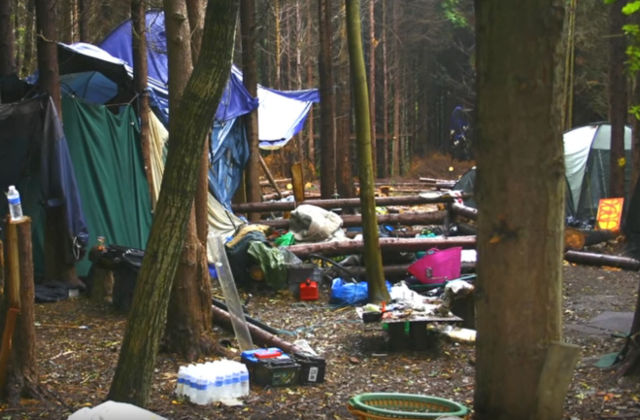 David shares this latest statement from the IW Ramblers. Also included below is a video Keila Pallares from Palmers Farm which neighbours the woodland. Ed

IW Ramblers is concerned about the ongoing illegal development in an ancient woodland at Woodhouse Copse near Whippingham.

The woodland is now owned privately and has been developed as a camp site and for storing abandoned vehicles and other waste materials. “We inspected this woodland in 2014 when enforcement action was taken. There has been further development since this time.

“It now resembles a shanty town and a tip.”

“Woodhouse Copse is in an AONB and a part of it is SSSI. The woodland is highly prized by the local community who have a right under CROW 2002 to access it.

“Mr Kirk has no felling or thinning licence and is being investigated for illegal dumping of waste. The CPRE stands firmly against this form of rural vandalism.”

Campaign against sale
IW Ramblers campaigned against the sale of woodland in 2011 when the Government proposed that all Forestry Commission woodland be sold privately.

Caroline Spelman, then Environment Minister, agreed to withdraw this proposal.

However whilst this now gives protection to major woodland such as Parkhurst Forest, Brighstone Forest and Firestone Copse, some smaller parcels of woodland were sold.

Ancient woodland in AONB
Woodhouse Copse is in an area of outstanding beauty and within a Special Area of Conservation. The 45 acre site is ancient woodland with has had continuous tree cover from 1600. The Forestry Commission acquired this woodland in 1957 and planted it later with mixed species.

It is now home to red squirrels, bluebells and a variety of butterflies. The public has a right to roam in this woodland as it is Access Land. Background
Woodhouse Copse is 45 acres in size and is designated PAWS (Planted Ancient Woodland Site). It is located approximately two miles north-east of Newport, off the minor country road between Whippingham and Wootton.

The land was sold in 2009 by the Forestry Commission subject to the 2002 CROW Act for public access. Graeme Kirk has been the legal owner since 2009.

He has been prosecuted for running illegal licensable activities (raves) at the site without a Licence under the Licensing Act 2003. He has also been evicted and fined for living on the premises.

Licence not renewed
The Forestry Commission initially granted him a thinning licence and this has subsequently not been renewed. This means that as from October 2015 Mr Kirk and his team is allowed to remove only 5 cubic metres of wood per calendar quarter and the trees which are removed must be only 15cm in diameter at chest height or less.

The Forestry Commission has also filed a complaint with the Environment Agency (No. 1435542) for dumping waste.

The Forestry Commission has also stopped him from working on site due to Health and Safety concerns although he is able to continue woodland work if he buys (and uses) the correct equipment).

This is disgusting and he should feel the full weight of the law and more. Better still I suggest he move off the island. What a disgrace.

It states in the video that it is meant to have public access but doesn’t under the present owner…. Does that mean that he is restricting public access to a public area? If so, maybe a show of public strength is required in the form of a mass “trespass”….Although it cannot be classed as a trespass if it is supposed to have public access.

Vote Up00Vote Down
Amberlight
Absolutely appalling that this is allowed to carry on. I pass this on my way to my in laws every week. We have been saddened to see the rapid deterioration of this beautiful place. I am shocked that the Forestry commission who are supposed to be the guardians of such places sold it on to a man who so obviously has no care or any idea of… Read more »
Vote Up00Vote Down
levchenko

I’m with smuttydog for a mass trespass! We need to take this back – and soon

The problem on the Island is that the AONB doesn’t count for much any more, Council is littered with a history of disregarding it when it suits. Look at what they are doing to the Tennyson Heritage Coast, they have promoted an agreed four story buildings just off St Catherine’s Point.

It would appear that no-one has taken any interest in this site for several years, so any objection to its more sensible use as the new Red Funnel/Wightlink ferry terminal access would be hard to defend.
Has Mr Kirk unwittingly done us all (and especially East Cowes and Fishbourne) a favour?

Kind person/s dumped a double mattress in Parkhurst Forest near the entrance this morning after 10.15am and before 11am.