Hubert and Graham Smyth made an unusual discovery when they set a string of swinging boat moorings at Fishbourne Bay at low tide last year. Their find is to be donated to the Isle of Wight Museum. 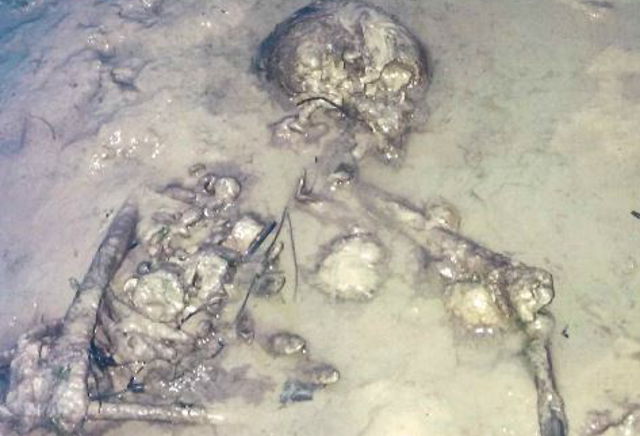 Sam shares details of this fascinating find off the Isle of Wight. Ed

The bones of a woman who lived 2,000 years ago, and found in a bay off the Isle of Wight, are to be gifted to Island’s museum.

Brothers, Hubert and Graham Smyth discovered the skeletal remains as they set a string of swinging boat moorings at Fishbourne Beach at low tide on 9 March 2015. The bones were in the silt which is under the waterline when the tide is in.

Graham Smyth, who is a radiographer, gently lifted out one of the bones and was confident it was a human radius, so he left the rest of the skeleton in situ and called the police.

As many bones as possible were recovered
Caroline Sumeray, a barrister with No5 Chambers and HM Senior Coroner for the Isle of Wight, takes up the story.

“A decision was made to recover as many of the bones as possible from the surface of the mud before the tide came in. The remains were lying on their left-hand side in a foetal position with the arms up against the chest and the legs bent at roughly 90 degrees to the body. There was no clothing or any other object attached or adjacent.

“My first job was to establish if this was a recently deceased person or something a little older – possibly from a long washed away graveyard attached to the nearby Quarr Abbey. If the body was recently deceased, I needed to rule out an unnatural death.” and reported that the bones were ancient, the remains of an adult human female who died almost certainly beyond living memory.

The cause of death could not be established but there was no evidence of injury or dismemberment.

“The pathologist reported that her upper left arm bone and the left collarbone were significantly shorter than the right, possibly suggesting that she suffered either a congenital deformity, a right-sided stroke or other cause of muscle wasting that affected the left side of the body many years before death.”

To be certain of the age of the bones, radio-carbon dating was used.

“The results stunned me. My lady is indeed a long time dead!”

“I consulted with the Ministry of Justice and don’t need a Home Office licence to bury her, and as such can give her to the local isle of Wight Museum. The Isle of Wight Council’s Heritage Service can accept these human remains and accession them as part of the Council’s Archaeology Collection.

“They will be appropriately and ethically stored and recorded as per national guidelines for the treatment of human remains. I think that’s going to be the best place for her.”

Apparently she died from old age whilst waiting for a letter from the council about some matter.

Or waiting for a hospital appointment to fix that problem with her left arm!!

As usual, an interesting subject, the 2000 year old lady found on the beach, becomes a slagging match between the people who wish to comment on the find.
Are there no adults left? who can pass a comment on something that may be of interest to the public in general, without somebody replying like an infant child!

I learn’t years ago never to disturb a resting woman,the repercussions don’t bear thinking about.

Fascinating! Proper care and preservation of this Ancient Lady should be seen to… Don’t you wonder what else might be settled just beneath the surface? Something from her daily life? Evidence of her manner of living? Maybe others from her tribe? Very fascinating!

No, the best place for her is to bury her as per her wish.

No one can know her wish though David. And it’s not like the Richard 3rd situation.

well – you go ahead and ask her how she wants to be buried then … good luck .

Vote Up00Vote Down
VentnorLad
I wonder how the editorial meeting went? “A body has been found. It’s a woman. She seems to have had some kind of disability. Shall we deal with the interesting archaeological points of note? I think we should, but also remember that this lady, someone’s daughter, has lain undisturbed for millennia, we should treat her with the respect and dignity we would hope for our own family.… Read more »
Vote Up00Vote Down
markp1963nagle

Its what she wanted!!?? Decomposing body??? are you nuts , after 2,000 years there is a good chance that it would be finished by now! I think her soul may have left by now. It is an archeology item. A lot can be discovered such as diet , diseases that may have happened. A great addition to the Museum!

Nonetheless, I think I might tick the box marked ‘Prefer not to be stored or displayed in a museum in 2000 years time’

Vote Up10Vote Down
Andrea
On the contrary, I’d love to be displayed in a museum in 2000 years time!! Displaying “her naked, decomposing body for all to see” ?? Naked? Really? I obviously can’t see her private parts as clearly as you can. Decomposing? After 2000 years? Bl**dy slow moving bacteria they’ve got on the IOW. “Someone’s daughter”? You think her mum might be upset that she’s in a museum? Why?… Read more »
Vote Up00Vote Down
Terry Carpenter
This Lady could well have been a very early ‘Caulkhead’ . Given the carbon dating window of plus or minus 62 years (28 AD -90 AD) She could predate the Roman Invasion of 43 AD. She is obviously of great cultural and historical importance. Although she would probably have been from a Pagan Celt Tribe, Her remains should be treated with care, respect, and dignity. We have… Read more »
Vote Up00Vote Down
nico

This is really a question of archaeology as science v. mumbo-jumbo. How could anyone know what funerary rites were practised by her culture. What if it entailed human sacrifice?
My mother said “you can throw me over Culver Cliff when I am gone for all I care”
I had to tell her this was technically illegal.

Vote Up00Vote Down
VentnorLad
Allow me to clarify my earlier post, Mark. I am a strong advocate for the advancement of human knowledge through rigorous scientific endeavour. I have no difficulty with this story being run on OTW, engaging the public with archaeology is a noble aim. My only objection was the inclusion of photographs of the lady. My reason is that the protection of human dignity is dear to my… Read more »
Vote Up00Vote Down
Mark Nagle
Alas,David she is no more than a pile of (very interesting, bones. As the church says in it burial mantra “ashes to ashes, dust to dust. What dignity does a 2,00 year old set of homosapian remains have? Come on do you worry about the bones of a chicken you just ate? They are remains nothing more nothing less. How on earth do you de-humanise a human… Read more »
Vote Up00Vote Down