A Government-backed 5G trial will be coming to the Isle of Wight for Cowes Week 2021. 360 cameras onboard the yachts and lots of ways the public can get involved are detailed 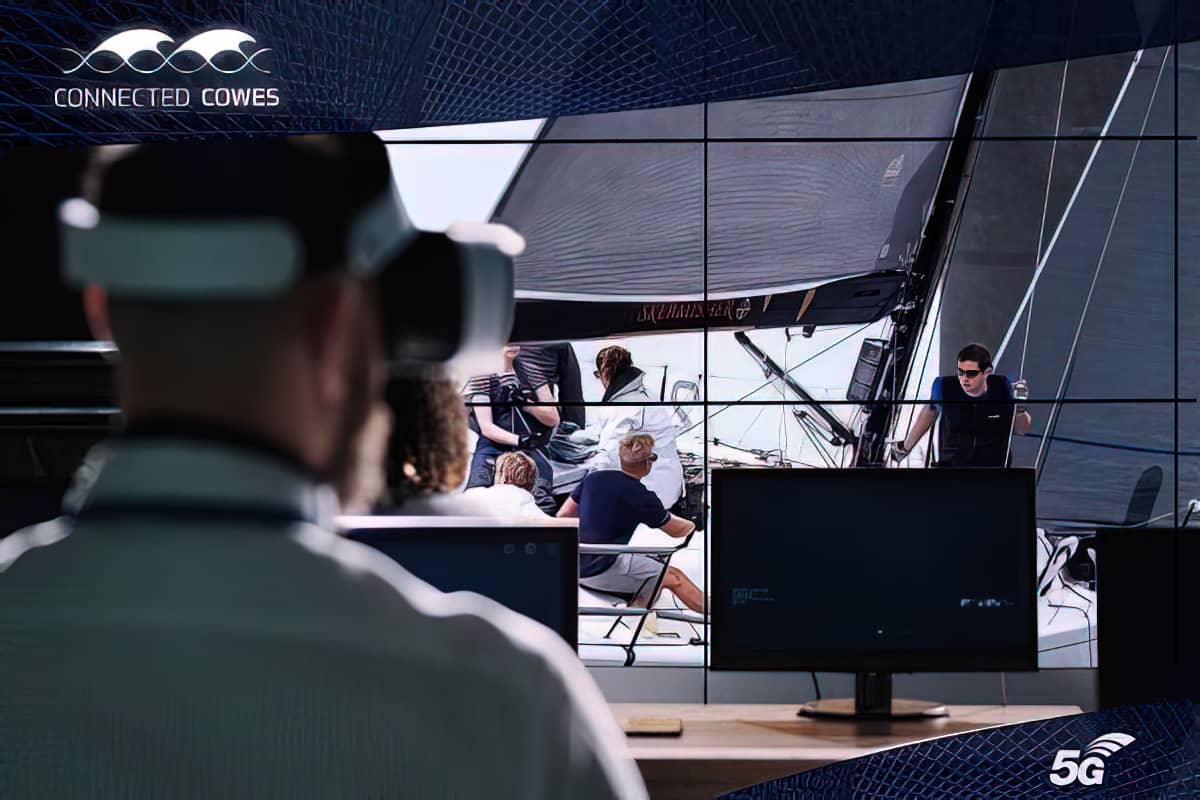 Cowes Week organisers share this latest news, in their own words. Ed

Cowes Week Limited (CWL) is thrilled to announce that it has been selected by the Department for Digital, Culture, Media and Sport (DCMS) to participate in the 5G Test and Create project.

With £825,000 DCMS funding as part of 5G Create – a government-backed competition exploring how 5G can improve people’s lives and help the UK build back better from the pandemic – Cowes Week Ltd and its partners, aql and the 1851 Trust will deliver the Connected Cowes 5G Project and showcase its capabilities at the Cowes Week regatta in the first week of August 2021.

“Connected Cowes is just one of the ways we’re exploring 5G’s uncharted waters through our £200 million testbeds and trials programme. I look forward to seeing it demonstrate how 5G can allow anyone, even those hundreds of miles from the coast, to experience the thrill of yacht racing.”

360° cameras fitted to 50 boats
Covering sailing from a spectators viewpoint has always been difficult but the Connected Cowes 5G Project will see high definition 360° cameras fitted to 50 boats at this year’s regatta, each of those cameras beaming back real-time, high definition pictures to the Cowes Live TV presentation, which will be shown on big screens around the town, as well as being available on the Internet worldwide.

Turn your head and the camera will show you what the crew are looking at right that second!

Race organisers will use the new technology to enhance their race management capabilities and with 700 boats circulating on 42 different race courses every day that is an enormous challenge in its own right.

5G STEM learning package
aql, who are long-term sponsors at Cowes Week, are providing the technical infrastructure to make the project a reality and after the regatta the 1851 Trust will put together a 5G STEM learning package which will complement the already significant work that the 1851 Trust (the official charity of Britain’s America’s Cup Challenger, INEOS Team UK) is doing in this area.

5G Project a test bed for sponsors
An event like Cowes Week relies on sponsorship, but in the past, sponsor return has sometimes been difficult to quantify without the ability to put the sport on television.

Using the Connected Cowes 5G Project as a test bed however, CWL aims to bring exciting and engaging television coverage to Cowes Week, to sailing worldwide and thereafter to other non-stadium sports through a new sports media delivery company.

CWL will be at the vanguard of covering the wide range of extreme sports which to date have struggled to get an engaged audience connected.

6 Comments on "5G Isle of Wight trial coming this year"

Is it not interesting that we seem to be sleepwalking into 5G? Having a massive global network of 5G opens up population monitoring/surveillance for the rest of time. For what bnefits – faster download speeds for ‘stuff. ‘1984’ in 2021?

When people can’t even get the frequency that UK 5G operates at correctly, it makes you wonder if they actually know what they’re talking about. The answer is no, they don’t.

Vote Up7-5Vote Down
peterj
Some people are not limited by facts, especially when they are exploiting people through fear. There are several bands that either have been or will be allocated for 5G. The main frequency band for the launch of 5G is 3.4GHz to 3.8GHz. For comparison, the fastest home WiFi is 6Ghz. There is also the ‘super data layer’ with frequencies in the 24.25 – 27.5GHz band planned for… Read more »
Vote Up70Vote Down
davidicke
Exactly, Neil – more Turkeys demanding Christmas. At 60GHZ within the 5G range the frequency interacts with the oxygen molecule and prevents the body absorbing oxygen on the scale that it needs. They will call the consequences for respiratory health ‘Covid-19’. And people will believe it as usual if the government tells them to. I mean governments don’t lie and they are only run for the benefit… Read more »
Vote Up10-21Vote Down
stevejc
Oh dear, booted off of major platforms for spreading pernicious nonsense OnTheWight is graced by DI. Your comments about the lack of testing are demonstrably false and your pithy sarcastic prose is tiresome in the extreme. But I guess you know your audience, fear is used to control as you have so often told us, whilst using that precise technique yourself to pull along a susceptible audience.… Read more »
Vote Up20-8Vote Down
saracen
I am sorry sjc but being a mere Northern grammar school lad I found your comment difficult to understand without a dictionary. But, as much as I admire DI’s view on the ‘Big Question’ as to why we are here and who actually controls us, 5G is the future whether we like it or not. If we do not accept and keep up with new technology then… Read more »
Vote Up1-1Vote Down