The work is four weeks into the scheme and still on schedule to complete by 4th May. Island Roads explain what’s involved. 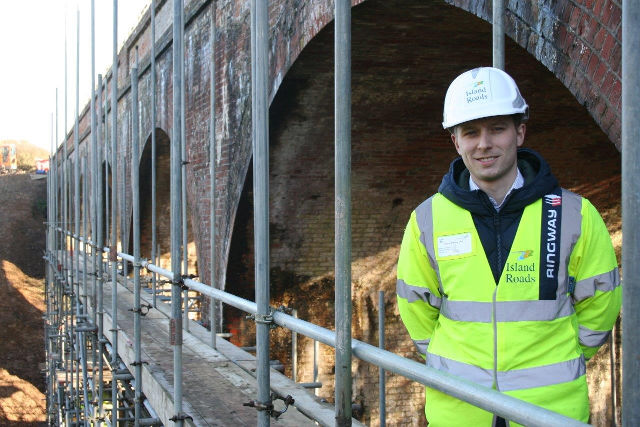 Work by Island Roads to upgrade Brighstone Viaduct on the Military Road is progressing well.

Some four weeks into the scheme, scaffolding on what is the third largest bridge structure on the Island is in place allowing work to dismantle the parapet which will then be rebuilt to meet current safety standards.

This work will mean the metal railings, erected as a temporary measure some years ago, can be removed.

Waterproof membrane
Scaffolding is also being erected under the bridge to allow work – beginning next week – to introduce a waterproof membrane that will protect the arches and piers from water ingress.

Masonry repairs will also be undertaken.

Project manager Jason Boulter said the scheme remained on schedule to be finished by 4th May, in preparation for the May Bank Holiday weekend, despite the arrival of the so-called ‘Beast from the East’ cold weather system.

“As you can imagine we have had to contend with the recent severe weather which has meant certain elements of the project have been re-phased but at this point in time we are confident we will finish the work according to the planned timetable.

“The current 20mph speed restriction is in place to help us complete the work safely and we would like to thank motorists for their co-operation.”