Shot over two years and featuring exclusive interviews and behind-the-scenes verite with Chelsea Manning, the film picks up on the momentous day when she leaves prison 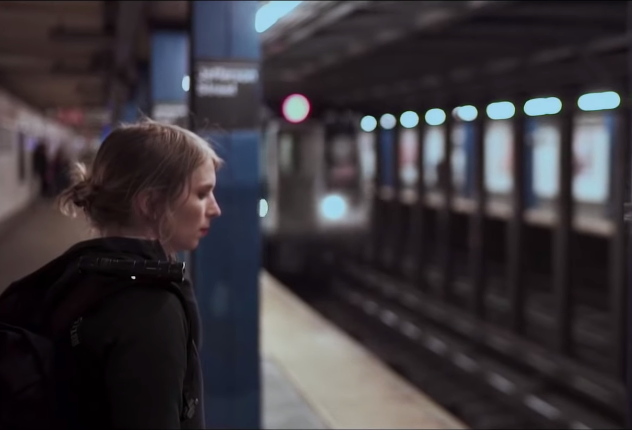 Next month those interested in the journey of whistle-blower Chelsea Manning, have a chance to see the documentary film XY Chelsea in Ryde.

Anna Fauzy-Ackroyd – whose current exhibition at Monkton Arts dedicated to the defence and freedom of Julian Assange – spoke at her opening event on Monday of the ‘courageous truth teller’, Chelsea Manning, whose life is inextricably linked with Julian’s even though they have never met in person.

“The Afghan and Iraq war logs revealed war crimes and atrocities she could not ignore in her army role as intelligence analyst and so came about the biggest leak of classified documents in history including the video that became collateral murder.

“She was sentenced to 35 years for leaking these documents by the military courts. This sentence was later commuted, after she had served seven years, by Barack Obama and she was freed on 17th May 2017.

“However, she is currently back in prison having refused to cooperate with a secret grand jury process intended to coerce her into testifying against Julian Assange ahead of his extradition trial.

Where and when
The documentary film XY Chelsea will be showing at the Ryde Commodore on Wednesday 20th November at 3.30pm and 7.30pm.

Shot over two years and featuring exclusive interviews and behind-the-scenes verité with Manning, the film picks up on the momentous day in May when she leaves prison and follows her through her journey of discovery, while also examining her place in the conversation on national security and the fight of the transgender community for rights and visibility.

You are encouraged to buy tickets in advance as that will help support the independently funded hire of the theatre.

This article fails to state that Chelsea is still in prison, despite being pardoned by Obama, she was re arrested for refusing to testify before a grand jury. She has stated repeatedly that she will never testify.

She remains prison. A victim of Trump and American barbarism.

Anna’s comments in the article state, “However, she is currently back in prison having refused to cooperate with a secret grand jury process intended to coerce her into testifying against Julian Assange ahead of his extradition trial.”

Yep, you are correct, maybe I am just so upset by her treatment it makes me mad.

The orange one makes me mad too.

Vote Up8-1Vote Down
bovo
Chelsea Manning has my greatest respect, as does Daniel Hale who – despite knowing the fate of Chelsea Manning and Julian Assange – has followed in their footsteps and faces spending most of his life in prison. The suffering of Julian Assange at the current time is almost imaginable and that’s probably why most people would prefer not to think about it and to lazily follow media… Read more »
Vote Up60Vote Down