New Isle of Wight Milk: A look around the facilities and all you need to know (video)

Here’s the description (with pictures) of our tour around the facility, explaining the considerable bravery this has taken and details of what you’re supporting when you buy the new Isle of Wight Milk. 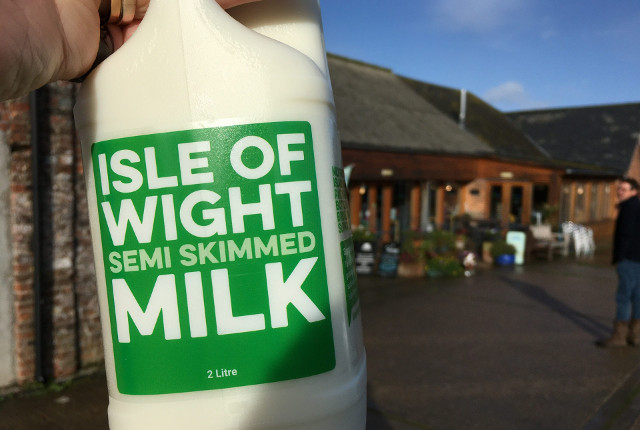 We were lucky enough last week to be invited to have a look at how the new Isle of Wight Milk was being produced.

When you drive past Briddlesford Farm from Robin Hill, you’ve probably noticed for the last few years there’s been a new barn on the left covered with solar panels. Well, at the far end of that barn you’ll find the carefully controlled milk processing, bottling and cheese making facility.

We guess it’s not surprising that when you enter the building, you have to shed outer garments and shoes, swapping them for white wellies, a long frock coat and a very fetching blue hair net!

What was surprising was the heat that greets you when you pass through the sealed door to the milk processing and bottling area.

Huge investment
The equipment in here has been a major investment for the farm – getting on for a million quid.

On the right hand side was all of the equipment that’s needed to pasteurise, then cool the milk, which helps give it a 12 day shelf life from bottling.

The left of the room holds the bottling, capping and labeling machine (see the video below). Once crated up, they are transferred into the next room (again behind a sealed door) which is shockingly cold, made all the more notable after the warmth of the room before.  Here it waits, ready for its dispatch from the next room.

Why this is a major step forward for IW farmers
The way dairy farmers usually deal with their milk is to have a contact with a national milk processor to take it away daily, in the Island’s case, to the Mainland for processing.

The benefit for the farmer is that they know all of their milk will be bought, so they don’t need to think of it any further than when they gather the milk. The disadvantage is that they have to take the price that they’re offered.

They’re under rolling 12 month contracts, meaning that if a farm wants to exit it, they have to give a full year’s notice.

Unsurprisingly, it’s a major decision to come out of their contract and go it on their own. They’re then taking all the risk of what to do with their milk from that point.

Briddlesford is leading the way by investing and starting this processing and bottling plant.

Joining them is the Isle of Wight’s largest dairy herd. Read’s Farm (on the land underneath the Blacksmith’s Arms on Calbourne Road) has 280 head of cattle producing between 2-2.5m litres of milk a year.

As sales grow, there’s capacity at this facility for growth, so the more people that buy the milk, the more farms that can join, and the more workers that will be supported.

It’s been a very long process to get in the shops
Getting the new Isle of Wight Milk onto the shelves of the major supermarkets on the Island is a very long process – up to 18 months of meetings, discussions, inspections, integrating their computer system, etc.

As of now it’s available through three of the Southern Co-op branches: Shanklin, Freshwater and Cowes. More are branches of co-op are planned, as are other large shops.

Why the £1.50 is worth it
The price of the milk is expected to be £1.50 for two litres (~4 pints). This is slightly more than milk can be bought, but the differences/ benefits here are considerable.

7 Comments on "New Isle of Wight Milk: A look around the facilities and all you need to know (video)"

This is really good news apart from one thing and it isn’t the price! When you live in the Ryde/Wootton area travelling to the nearest stockists at either Shanklin or Cowes to get milk is impractical and doesn’t help with ‘food miles’ either!
When available in more local shops then yes definitely would buy it.

Regretably no notification of organic milk, or animal welfare standards.

Great to see. Hopefully they’ll produce smaller bottles in future. 2 Litres of milk would have gone off before I’d used half of it!

Vote Up4-1Vote Down
CB500
Ethics of stealing baby’s milk aside I wonder if the Island’s milk drinkers ( just plain weird ) are comfortable with Read’s Farm’s association with the Hunt? This, albeit old post, from Twitter. Later events can be found on the Hunt website. IW Foxhounds‏ @IWFoxhounds · 21 Nov 2013 CHANGE OF PLAN! This Saturday (23rd) we will be meeting at Reeds Farm, Carisbrooke at 12 noon by… Read more »
Vote Up4-10Vote Down