Floating Bridge: Isle of Wight council reject claims of up to 30 week outage for repair – but are so far silent on whether 8 weeks possible

Claims have emerged that the Cowes Floating Bridge – already out of service for over three weeks – needs parts that could take up to 30 weeks to be fitted. News OnTheWight has asked the council to clarify 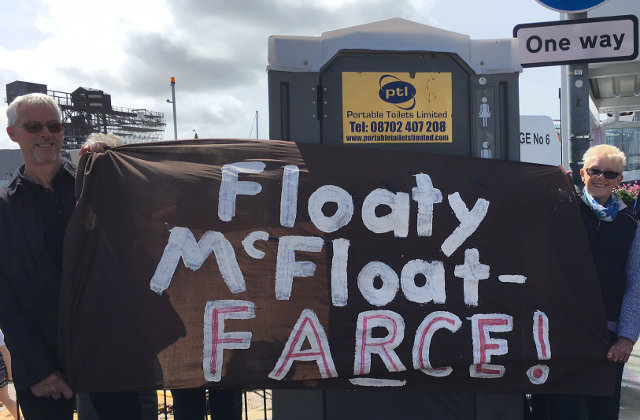 After seeing claims on social media that repairing the Cowes Floating Bridge (FB6) could take between 8-30 weeks, News OnTheWight got in contact with Isle of Wight council.

Cllr Ian Ward has rejected claims that parts for the prow hydraulics on the Floating Bridge could take up to 30 weeks to arrive.

News OnTheWight has also asked whether it could be eight weeks that FB6 is out of action. At time of publishing, he had not responded.

The three-year-old £3.2m+ Floating Bridge has been out of action for over three weeks, following a planned suspension for ten days of “essential maintenance”.

“Major fault” identified with prow hydraulics
Earlier in the week the Isle of Wight council said a “major fault” had been identified and the bridge remains out of service.

News OnTheWight contacted the council for a simple yes or no as to whether there could be a 30-week lead time for the new parts, after the information was posted on a public Facebook Group, Floaty Mcfloat Farce.

Ward: None of scenarios entail anything like a 30 week period
Cllr Ian Ward, the cabinet member in charge of transport, responded swiftly, telling News OnTheWight,

“Engineers are currently investigating an hydraulic malfunction that we hope will be rectified as soon as possible.

“They have considered several possible causes and remedies; none of those scenarios entail anything like a 30 week period.

“However, It’s difficult to give a time line until the actual problem is found.

“Hopefully, the engineers will find the problem soon, then a remedy and time line can be determined.”

Racking up losses and ongoing costs
The Bridge has been racking up losses for some time, and has experienced rising costs. Almost two years ago the costs had risen to over £6,400,000.

There has also been the additional cost of having to use a barge during certain tides to keep the Bridge in place.

You can flick through the 300+ articles about the Floating Bridge to read the background, where the list of failures goes on and on.

11 Comments on "Floating Bridge: Isle of Wight council reject claims of up to 30 week outage for repair – but are so far silent on whether 8 weeks possible"

Why does it take ages to identify a problem with hydraulics? It relatively simple, the prow goes either up or down, like my two fingers will when Dave Stewart requests my vote in the forthcoming Council Elections.

Oh dear, Cllr Ward is still in denial!
When will he grasp the nettle?

Vote Up390Vote Down
davimel
There are certainly fewer comments about this absolute debacle which some (councillors) may assume means that we don’t mind the disruption yet again. The truth is that so many of us are so incredibly and thoroughly peed off with the massive incompetence shown by the designers, the builders and most of all the Council that signed off on what has become one of the worst fiascoes in… Read more »
Vote Up38-2Vote Down
greenfiremouse

Reminds me of the Cowes Enterprise College fiasco. Many of the build faults have not been rectified to this very day…

There is not much left to say about this floating bridge other than it has now cost we the council tax payers more in keeping it around than it would have cost to replace it with one that is fit for the job.

Total incompetence would appear synonymous with being a Conservative.

Most mechanical systems that involve fluids will have filters to remove contaminants.

The problem is the bridge is far too big to cope with the tidal flow, it is clearly not suitable for its operating environment, and never will be. I’m at a loss as to why the council don’t sell it on, and reinvest the money in a design that is more appropriate.

Why not fit a whole new floating bridge that this time is fit for purpose?

Can somebody let us know exactly how many days since inception this “thing” has not been in operation please?

Its not floating and it isn’t a bridge…