We’ve heard about Culver’s 680km journey to Essex and back, but what about the other five White-Tailed Eagles? The Project Officer shares an update. 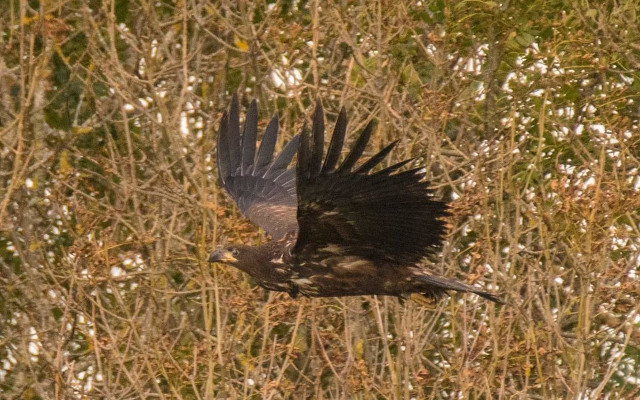 The adventures of Culver, a young male White-Tailed Eagle, are incredible. He’s just arrived back after an amazing 680km flight around southern England, and was even spotted over central London! He flew back to Isle of Wight over Culver Cliffs, the site he’s named after.

However, it is also about time we heard a little more about how the other young eagles are doing. They have certainly been having adventures of their own.

The females have so far been the least adventurous, but are steadily ranging around the Island, hopping between copses and sussing out their new home.

Sightseeing
The males have been exploring across the Isle of Wight, taking day trips to some of the Island’s major landmarks. Two have visited Culver Cliffs since their release.

This was the last known breeding site of white-tailed eagles in southern England. One has flown over Carisbrooke Castle at an altitude of 650 metres – twice as high as the Eiffel Tower.

Off the Island
The smallest male has been visiting the mainland, soaring over the skies of Portsmouth and Southampton, and ventured along the Beaulieu River. All the while proving he may be small in size but not lacking spirit.

He’s reached staggering heights during his journey, peaking at 1,200 metres – over a kilometre high!