Isle of Wight council explain their use of the ‘strongest weedkiller on the market’ that’s sprayed from moving Quad bikes: An indepth look 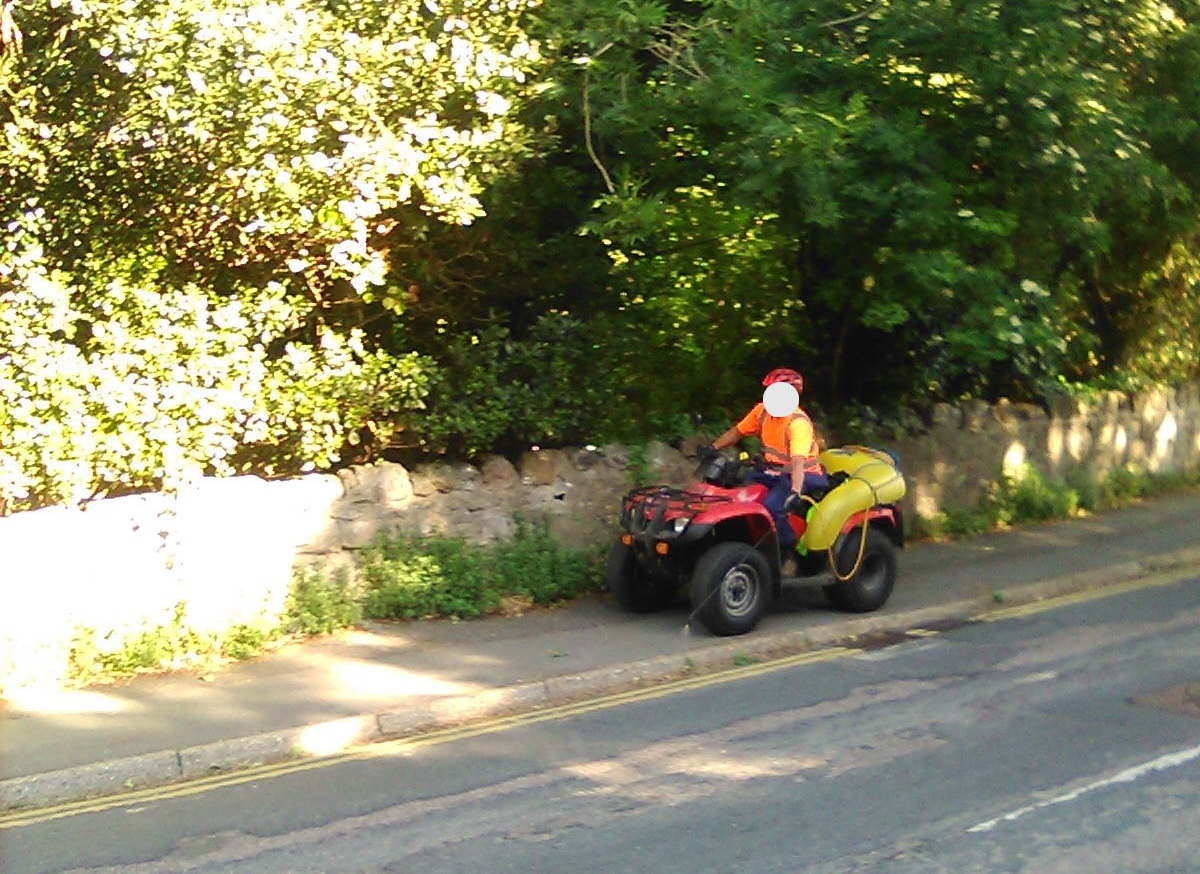 The spraying of weedkiller on Isle of Wight roads and pavements has started again, as Coronavirus lockdown loosens. Along with that comes concerns about what is being sprayed and the potential damage it might be causing.

News OnTheWight has been looking into this and found that Isle of Wight council and their contractor, Island Roads, are still using a weedkiller which contains glyphosate – the herbicide ingredient at the centre of high-profile lawsuits, conflicting scientific studies and health claims. It’s use in the UK is still legal.

Several years
The Isle of Wight council has for a long time defended their use of glyphosate, as raised by News OnTheWight and its readers over several years.

Last April the IWC said they wouldn’t budge on concerns over herbicide spraying and the death of Ventnor’s wall lizards, with Cllr Ian Ward saying,

“This week we are being visited by a specialist in this field who is going to advise us about how these issues have been managed in other areas.”

The return of the spraying
With the Island Roads quad bikes back out spraying the roads and pavements across the Isle of Wight, News OnTheWight asked Cllr Ward what the specialist had advised, and which parts of that advice had been implemented.

A spokesperson for the Isle of Wight council told News OnTheWight,

“The specialist who visited last year, Dr Philip Sterling of Butterfly Conservation, gave advice and guidance to elected members and with them, visited a number of verges around the Island. This discussion, along with financial considerations, was one factor that led to the reduction in mowing frequency of rural verges which was introduced this season. The discussion did not lead to a change in the practice of applying herbicide.”

IWC use Gallup Hi-Aktiv
One unanswered question from last year’s query was the name of the product being used.

This week a spokesperson for the Isle of Wight council finally confirmed that Gallup Hi-Aktiv, which is a glyphosate-based product, is used. They added that it is “applied only when necessary to hard surfaces at road surface level”, continuing,

“There are currently no plans to change this practice. Spraying herbicide from a moving quad bike is legal if carried out safely to industry standards. We ensure this work is done by trained and competent operatives. “

Wheeler: Tightness in my chest and sore eyes
Earlier this week Adrian Wheeler (Ventnor) wrote to Island Roads with his concerns. He said,

“You have again been riding quad bikes illegally on the pavements in Ventnor and spraying a toxin indiscriminately at speed on a windy day. Your employee had no PPE whatsoever.

“I had a tightness in my chest and sore eyes after being passed by your operative.”

Island Roads told Adrian this herbicide, “is considered not harmful to the environment, animals, watercourse or fish when used correctly”.

Bridget Boudewijn also raised her concerns about the effect the herbicide could have on the Ventnor flora and fauna.

IWC: Our contractors are aware these lizards live in the walls
In response to concerns about the habitat of the Ventnor wall lizard, the IWC spokesperson told News OnTheWight,

“Vegetation removal on walled areas tends to be done by hand and – as is our practice in this kind of work – only after a visual inspection. This work does not usually involve herbicides.

“This kind of location is particular common in Ventnor. Our contractors are aware these lizards live in the walls and they bear this special habitat in mind when doing their work.

“In addition, when maintenance works are undertaken, if appropriate Island Roads have installed lizard tubes in Ventnor stonework to maintain habitat for lizards.”

What is Gallup Hi-Aktiv?
Gallup Hi-Aktiv is marketed as the “strongest weed killer” on the market and powerful enough to kill Japanese Knotweed.

Two years ago an American jury found that Roundup, Monsanto’s glyphosate-based weedkiller, “substantially” contributed to the terminal illness of a groundsman using the product.

How safe is glyphosate?
Three years ago the National Farmers’ Union (NFU) welcomed news that the use of glyphosate had been granted for a further five years by the European Commission Appeals Committee.

At the beginning of this year, Luxembourg was the first European Union country to completely ban products containing glyphosate.

EPA: Risks to terrestrial invertebrates and other organisms
However, in December 2019 the NFU reported on the recent findings by the US Environmental Protection Agency (EPA).

The EPA assessment on the use of glyphosate states that,

“While the agency did not identify risks to individual bees from glyphosate applications at rates below 5.7lb ae/A, risks to terrestrial invertebrates at higher application rates are uncertain.”

The EPA require following advisory is used to alert users to the potential impact to non-target organisms:

9 Comments on "Isle of Wight council explain their use of the ‘strongest weedkiller on the market’ that’s sprayed from moving Quad bikes: An indepth look"

newest oldest most voted
greenfiremouse
Can we establish what sense it makes to apply this poison to pavements? The claim that it is “applied only when necessary to hard surfaces at road surface level” is simply untrue unless you define a pavement as road surface. In our rather narrow road with even narrower pavements you are usually woken up on a Sunday morning by a quad bike going up and down all… Read more »
Vote Up91-11Vote Down
Steve Goodman
“With World Environment Day taking place today and the focus this year on biodiversity, I am sure many will agree that we are so lucky to live in a place that has been recognised by UNESCO as a biosphere reserve – a place of environmental significance. As we all start to be able to fully enjoy those outdoor spaces again, please let’s work together to help preserve… Read more »
Vote Up35-5Vote Down
garyeldridge
To spray allowing drift, as it is called, onto property belonging to another person, is illegal, and is negligence on the part of the Operator, thus should be reported, at the time. It is utterly laughable however, to accuse a public ‘agency’ of using ‘dangerous chemicals’ in a public place, as to do do so invites an investigation and subsequent prosecution; no public service is ever knowingly… Read more »
Vote Up9-28Vote Down
Rhos yr Alarch

Is it just too much bother to remove such plants manually… if indeed they need to be removed at all…?

You could remove weeds manually, or indeed burn them, but this doesn’t kill the roots and they will quickly grow again. This treatment is less labour intensive, quicker and cheaper.

With the IW Council it is all about saving money, nothing else.

Vote Up38-8Vote Down
snapper
The Isle of Wight Council and Island Roads know perfectly well that glyphosate is a dangerous chemical and that it must surely represent a danger to all forms of life, so any assurance it is safe can only be treated with disbelief. Yes, it is a convenient way of killing unwanted weeds but they can’t kid me there is no danger to anything other than weeds. As… Read more »
Vote Up40Vote Down
Barb

The use of weed killer is presumably used as a quicker and therefore likely perceived cheaper method of control than using people’s industry. We shouldn’t need any chemicals. Use people where we need people, support neighbourhood groups to care for local spots where possible & let nature take its course where it is safe to do so. I’m sure the overall cost won’t be so different.

I bulk bought loads of glyphosate weedkiller when I thought it was going to be banned. Works a treat on my driveway. The weeds don’t regrow for ages. Makes sense for it gone used on our public roads and footpaths. Quick and effective.

Why do you call yourself “Dalek” – or is it obvious?