Isle of Wight councillors criticised for ‘not pulling their weight’

With vacancies on several committees, councillors have been criticised for not pulling their weight in the chamber. Meanwhile Reg Barry has been a councillor since 1993 and never missed a full council meeting 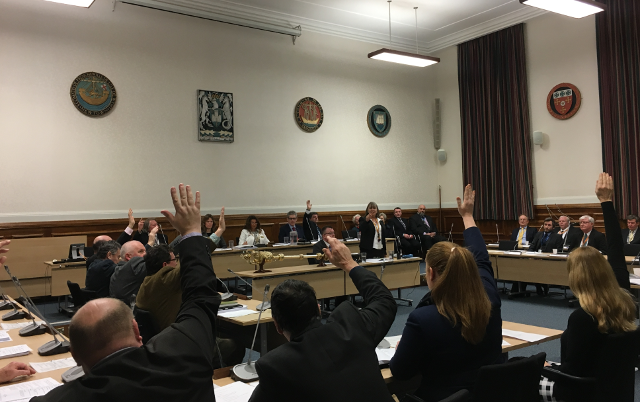 Isle of Wight councillors who claim their allowance but only show up at key meetings have been criticised by a senior cabinet member.

A report, discussed at last night’s (Wednesday) full council meeting, revealed there were vacancies on all but two council committees.

There are currently 13 vacancies across all ten committees — and nine of the vacancies must be filled by Conservative councillors.

“When I first read this paper, I was totally embarrassed. It does not look right. We have 25 people this side of the chamber and we cannot fill all our seats on committees.

“I accept people work and that is absolutely right, but there are people who still find the time to attend meetings.

“It really is down to group leaders to get their numbers to come aboard.”

Some committee seats have been empty for more than a year.

Barry: Not missed full council meeting since 1993
Lib Dem Cllr Reg Barry, who sits on four committees, was told he could be taken off the planning committee after ten years in the role — due to a reallocation of seats among party groups.

He could be replaced by Independent Network Cllr Ian Stephens.

“I have always found the time that was expected of me and then suddenly I pick up this paper and see I am no longer on planning.

“This doesn’t show the Conservative group in very good light, does it? They are obviously not doing what they have been elected to do.

“I have been here since 1993 and I have never missed full council — we’ve got somebody who has just been elected recently who hasn’t shown up.”

However, any decision on reallocating committee seats has yet to be made —  because the report was withdrawn.

Stewart: “Have not got this right”
Council leader Cllr Dave Stewart admitted:

“Clearly, we have not got this right.”

“There are lots of people in this chamber who, if they put their hands on their hearts, really do not sit on enough committees.

“My partner thinks I live at County Hall — it shouldn’t be like that.”

Some councillors felt the criticism was too harsh.

Jones-Evans: “We need to be supportive of each other”
Cllr Julie Jones-Evans said:

“I am hearing a lot of judgemental comments about people not pulling their weight — you do not know what goes on in people’s lives.

“We are a cross-section of the whole Island here and we need to be supportive of each other.”

newest oldest most voted
peterj
IBM have had the technology for some years to make things out of individual atoms. I suggest they are contacted posthaste to construct a suitably sized violin. Councillors should be fully aware of what is required of them when they stand for election. This should in particular be nothing new to Cllr Jones-Evans seeing as she has been a Councillor for 10 years. If they are unable… Read more »
Vote Up40-4Vote Down
julieje

If you want a diverse Council then we have to support each other’s individual circumstances.
Full Council used to start at 6pm until recently so some working councillors didn’t have an issue before. Perhaps we should just encourage independently wealthy people to become councillors and then all the seats would be filled.
Surely what’s more important is how productive these meetings are and what difference can achieved?

Vote Up4-16Vote Down
peterj
No, I think the complete opposite. I’d rather we paid Councillors a proper amount of money in exchange for quality time spent representing us. The trouble is of course, those elected are not necessarily the best at anything. The whole system is mad and as painfully shown at local, national and international level we end up with those least able running things. Having a diverse Council means… Read more »
Vote Up30-1Vote Down
Benny C
Words fail me. No show at Council meetings should be on a two strikes and no pay basis. Underperforming Councillors should either be persuaded to step up or be forced to step aside. Diversity is one (desirable) thing, consistent time compromise, paid for laziness or sleepy ineptitude is another. The role demands attention, not excuses dressed up as diversity justifications. The role is the role. Ant Councillor… Read more »
Vote Up28-2Vote Down
Food for Thought
Could I suggest if Julie Jones-Evans cannot cope she should stand down. She obviously has other commitments that need her attention and is not giving her all. You should be a committed councillor, as Reg Barry is, or not be a councillor at all. Remind me, didn’t she stand as a candidate in the General Election? What would she have done then as a single mother with… Read more »
Vote Up27-5Vote Down
julieje
Crikey where did that venom come from? Have I done something to you long in the tooth? Hiding behind a pseudonym I can’t tell. I didn’t say I can’t cope just pointing out that a diverse Council is healthy and desirable. We could always go back to having retired wealthy business MEN and landed gentry representing our community. It’s this sort of public attack that puts people… Read more »
Vote Up22-13Vote Down
Food for Thought
No JJE you have done nothing to me and I did not consider my reply venomous, just truthful. Even 50 odd years ago good employer’s would give time off to their workers for council business so where you get your ideas of “retired wealthy business MEN” is a bit misleading. Elections mean that resident’s are able to vote for who they feel best represent them. Newport feel… Read more »
Vote Up16-14Vote Down
tracy

Julie goes way beyond her paid remit. She is an inspiration and your suggestion that she stand down is utterly absurd. To get a truly representative council you need a cross-section of people not just retirees. Hang on to people like Julie.

Vote Up10-1Vote Down
peterj
He just said that if she can’t cope then she should quit, which is surely common sense. It’s a shame that more don’t to be honest – too many just coast along with not even minimum effort put in. You have a point about representation and that is why I believe Councillors should be better paid and take the job more seriously. As it stands the Council… Read more »
Vote Up10-3Vote Down
Geoff Brodie

Julie and I have had our ups and downs over the last decade. However, she works her socks off for her town and her ward. Without her around my life as a fellow IW and Community Councillor in Newport would be a lot less fulfilling.