Isle of Wight Hustings 2019: An overview 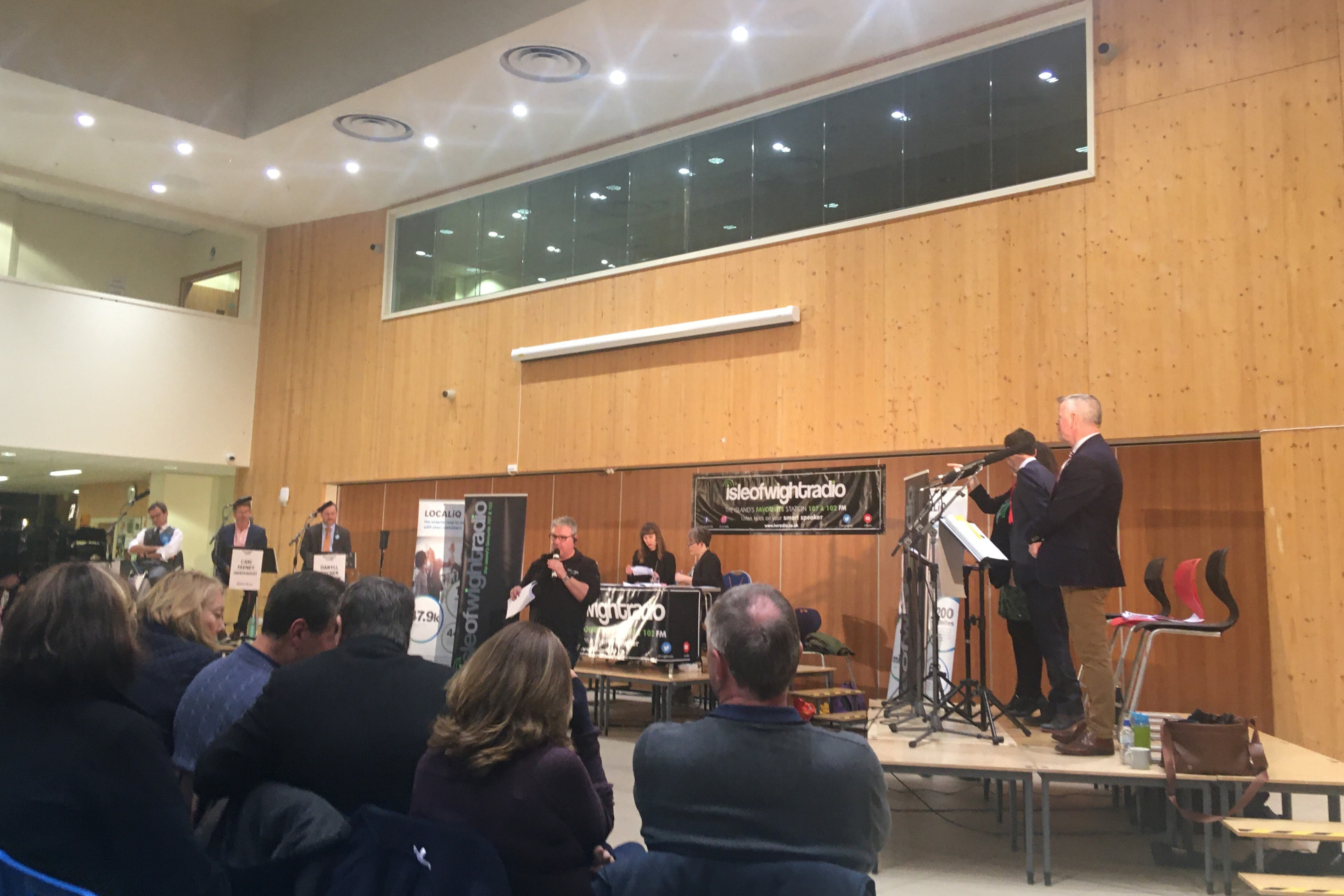 Starting off with a hush and not a bang, Red Rebels from the Isle of Wight Extinction Rebellion silently protested holding banners protesting climate change, as the audience walked through the doors.

Wide range of questions
Questions ranging from the NHS and Brexit, to education and childcare challenged the candidates as they tried to bring the audience on their sides.

In a round-up of the answers, you can see how the candidates fared against their critical competitors.

Conservative candidate, Bob Seely, former MP for the Isle of Wight, told the audience he was proud of what he has achieved for the Island — including the additional capital for the NHS and investment in Island Line.

Mr Seely promised extra funding for protecting the homeless, schools and childcare and the Conservatives will get Brexit done with Islanders benefitting greatly.

“Mental health services on the Island have never been good enough but the Isle of Wight NHS Trust is working on its inadequate rating.

“One of the most difficult things for the government to figure out how and where to fund the NHS. The funding is increasing — with £139 billion this year — it is about how to manage that.”

However, Mr Seely was concerned about how candidates were going to pay for all the extra funding they had proposed.

“There is a balance for paying for stuff and getting the money in.

“We need to work out where the money comes from — from personal taxation and business taxation.”

As a teacher, Ms Lowthion has seen how bad the cuts have been to the Island’s schools saying,

“We have withdrawn investment from our youth and we should be listening to them now.”

She also said mental health should be treated exactly the same as health, allocating an extra £6 billion funding.

“We are more likely to be treated by a migrant than be behind one in the queue.

“Do we trust Boris Johnson with the future of our NHS?”

Love: “Bridge will not save our NHS problems”
Independent candidate Karl Love, was keen to put the Island first — making the Island work for its residents — but the NHS needs to be saved.

“The bridge will not save our NHS problems — only we can save them.”

Mr Love has promised to focus on mental health services ‘that have failed us’, introducing prevention services.

“We cannot keep saying this is about money — it is about training a workforce to have quicker interventions.”

When it comes to Brexit, Mr Love promised to uphold the views of 62 per cent of the Island and leave the EU. He said:

“If we like it or not the people of this Island voted to leave and I have to uphold it.”

Labour popular with the audience
Receiving one of the biggest cheers of the night, Labour candidate Richard Quigley appealed to the audience to vote for real change.

Mr Quigley argued with Mr Seely, saying there was no new funding going into the NHS and waits that patients had faced were unacceptable.

He explained he would pay for his promises by:

But the Island will not benefit from Brexit, the only way left is a second referendum, he said:

“I am sorry I cannot give you a single benefit, but I can give you reasons to stay.”

Pitcher: “If you don’t live in a democratic country, you live in a prison”
Independent Brexiteer candidate Daryll Pitcher wasn’t intending to stand on the Isle of Wight but due to the Brexit Party candidate being withdrawn felt he needed to represent the Island as the Conservatives will not get Brexit done.

“It is very important we listen to the will of the people.

“Economically, in the long term, we will be free — if you don’t live in a democratic country, you live in a prison.”

But one he would definitely promise was free travel for patients and carers to the mainland and training more health professionals on the Island.

“What we are actually doing is stripping other countries of their highly trained people.”

As the self-professed ‘fixed link guy’ Mr Feeney said if we connected up, like the Isle of Skye, the NHS on the Island would benefit from extra funding with more specialists and consultants.

However one point all the candidates agreed on was the fact that no oil drilling should be done on the Isle of Wight — with trying to protect water supplies, wildlife and tourism high on their agendas.

newest oldest most voted
alisonjane
Richard seems to be appealing to an awful lot of undecided voters. His party does not tick all the boxes, but him, as a person; A local business man, whose children are at Island schools. Concerned about our hospital and real local issues that concern us all daily, that is exactly what we should be voting for. How refreshing would that be, to vote in the person… Read more »
Vote Up26-5Vote Down
tr2015

Cant understand why he wants to deliver us into the hands of Jeremy Corbyn.

Vote Up11-21Vote Down
Alternative Perspective
I vividly recall Mr Seely you saying during the last General Election, ‘judge me by me by what I have achieved’ Well Mr Seely, you personally, have achieved very little for the island. Whilst you are quick to jump on the coattails of others who have achieved success, what you personally have done as our MP is to consistently vote in Parliament against the island’s interests, like… Read more »
Vote Up37-22Vote Down
CB500

Richard was a clear winner and it would be great if Vix could put ego aside and stand down to give him a clear run at Bob who couldn’t even hold his temper on the night. I believe the terse phrase included ‘bl**dy lefties’.

Many so called bl**dy lefties are not ‘lefties‘ at all. They are just good decent human beings with a strong moral compass as to what is right, and what is wrong, in our world and society today.

Labour can never win here, and all a Labour vote achieves is ensuring that this will continue to be so.

Well, that clearly makes no sense. You do realise that voting for someone makes them more likely to win? That’s kind of how it works.

Oh and once again for the memory-impaired: Labour were the party that came a very comfortable 2nd in the last General Election, with more votes than the Greens and LibDems put together.

There will not be a bridge
Or a tunnel
Ever
Even if there were the cost of crossing would not fall.
Now concentrate on what the island can do in that reality!

I wish those idiots in the red dresses would get a job.