Having had some time for the third album to sink in, OnTheWight caught up with CHAMPS to find out more about their influences, new manager and why at least two songs reference red stars 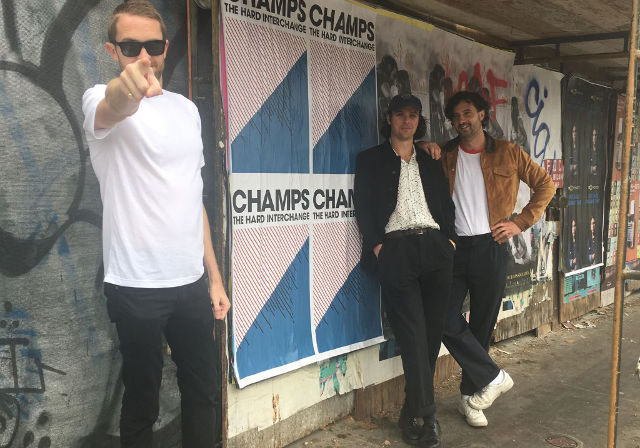 In the three weeks since Isle of Wight band CHAMPS released their long-awaited third album, The Hard Interchange, they’ve managed to attract some superb reviews and critical acclaim.

The Sunday Times’ music reviewer said the “trademark folk-tinged chamber pop” had new touches of The Bee Gees and Fleetwood Mac on Shadow of the Sea, as well as China Crisis and Sparks on 89 (You Stun).

LA performances
Brothers Michael and David Champion were in Los Angeles when the album was launched at the end of September and played several acoustic sets, one of which was at their music label, BMG, as well as securing airplay on the hugely effective and popular College Radio and were the highest played track, along with The 1975, for a week or two.

The Hard Interchange
Having listened to the album many times and let it all sink in, we had some questions for the brothers from Niton and were lucky enough to grabs some time with Mike.

Due to a number of factors the album was a long time coming (well worth the wait, we and many others believe), but as it had been written over a four-year period Mike said it had been difficult to make it flow.

Along with brother Dave and their producer, Sean Oakley (pictured above, far left), they spent a long time going back and forth between studios and trying out different mixes until they felt they had something cohesive.

Red Stars and shadows
If you’ve listened to the album, you will have noticed references to shadows and red stars in more than one track.

We wondered whether this was a mere coincidence or if there was something more significant at play.

“Dave and I lived in a beautiful house called Inglewood which is in a really secluded part of the South Coast of the Isle of Wight. A few years ago we had quite a few people over to watch the “Blood Moon” super moon.

“In the subsequent days it transpired that both of us had written a song which mentioned a red star immediately after that night. They both had to make the album!”

Going stateside
On this latest album noticed several references to America and asked Mike whether that was an active decision to help the band move into the US market, or whether it coincidence?

“I’ve actually been referencing America in a lot of my songs for years, but they’ve never made it onto any albums.

“I love so many American bands and I’ve always been captivated by the counter culture and the way it unfolded out there with bands like The Byrds, 13th Floor Elevators and the Velvet Underground etc.”

“It definitely wasn’t a conscious effort to write about America though. Although we’ve spent a bit of time there lately, so maybe it’s becoming more pertinent.”

Musical influences
The Sunday Times made reference to The Bee Gees and Fleetwood Mac, and we found influences of Robert Palmer and Bowie on the album so wondered who are some of CHAMPS other influences were.

There are so many, Mike says, and that’s maybe why the album sounds fairly eclectic. They’ve set up a playlist on Spotify called The Hard Interchange which lists all the bands that have influenced this record.

Mega manager
Finally we were curious as to how the lads managed to secure Mike Hertz as their new manager. Based in the US, he also looks after the likes of Lil Dicky, and his love for the brothers is clear.

“It was a bit of luck. Our producer was in the US and he met Mike with a view to working on something else. He mentioned that we’d just lost our management and if he’d pass the album on to anyone who might be interested.

“Turns out Mike listened to it and he was interested himself. So we’ve developed a really good relationship over three years and he’s helped us secure a new label, agents US lawyers and all that industry kind of stuff. He’s been to Ventnor and absolutely loves it!

If you want to learn more about CHAMPS, check out this great little video, shot by Silas Gregory and featuring Chale Abbey Studios where the band recorded their album, The Hard Interchange.