OnTheWight previews the final cut of the show being broadcast on BBC Radio 4 tonight. Find out why Mark Steel thinks Ventnor is so brilliant. 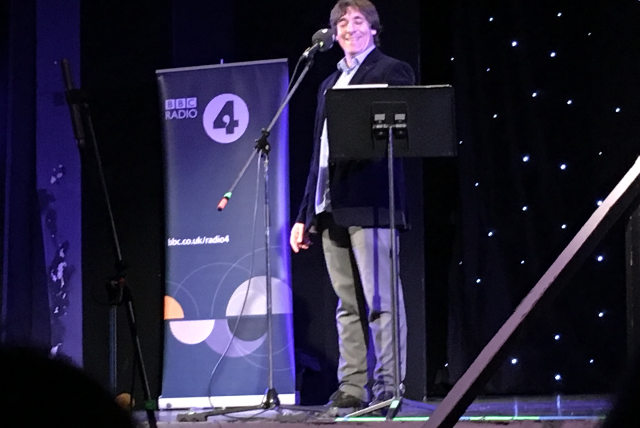 Back in September 2017, comedian and writer, Mark Steel – along with his merry production crew – came down to Ventnor on the Isle of Wight to record the BBC Radio4 show, ‘Mark Steel’s in Town’.

Performing to a packed audience at the Ventnor Winter Gardens (the show was massively over subscribed), the town comes across really well in the show, which we’ve just listened to the final cut of.

The town’s quirky and eclectic spirit is really captured in the recording. The Ventnor programme features a wonderful recollection of the day that William (from the local hardware shop, Hurst) saw France from his balcony. William’s delivery was so perfect for radio that Mark joked it would also appear on Book of the Week.

Mark’s view of the fixed link
The divisive issue of a fixed link resulted in a swell of “boos” and a few “yays” from the audience, including some joker who shouted out “build a wall”.

Mark went on to tell the audience he believes we don’t need a tunnel or a bridge here, something that was met by many cheers.

A wide range of issues
In the 30 minute show, Mark shares some interesting ideas for product development for the Garlic Farm. He takes a friendly dig at our beloved Island Line trains and the many road closures.

Emily from the County Press shares some of the bizarre letters to the paper, as well as the ditty about her car failing its MOT because a Red Squirrel was living under the bonnet.

The Island’s first escalator
The fascination with the first escalator on the Island was picked up by his researchers, with Mark referring to Simon Haytack’s tweet about BHS in the 1980s.

@b0ringtweets when BHS came to the Isle of Wight, it was our first escalator. People were going up & down it all day..

The public toilets in Marlborough Road get a mention – somewhere well worth visiting to admire the great restoration work of the Victorian tiling.

A magnificent collection of random objects
Mark finishes the show by saying,

“Ventnor is a magnificent collection of random objects. Palm trees, dinosaurs, wall lizards and 1930’s underground trains that don’t quite reach to Ventnor.”

The closing credits to the show were read out by William in his very best Ventnor accent.

Listen to the show
The production team said Ventnor was one of their favourites to research and record, so tune in later to find out why.

The show goes out at 6.30pm on BBC Radio 4 or check BBC iPlayer Radio after the show to catch-up.

Here’s what Mark had to say about it earlier on Twitter:

Tonight is the last in this series of In Town, from Ventnor. It takes months to make these and then they're gone, like a slither of moulted cat fur in a puff of wind. So please listen or they'll replace it with Toby Young. 6.30 on Radio 4

Wish I could gave got tickets – but great to hear it now!