Parents protesting last night accused Isle of Wight council officers of ‘fudging the figures’, and said the school was ninth out of 44 schools for improvement on the Island, and was ranked second out of all schools on the Island for Key Stage 2 performance. 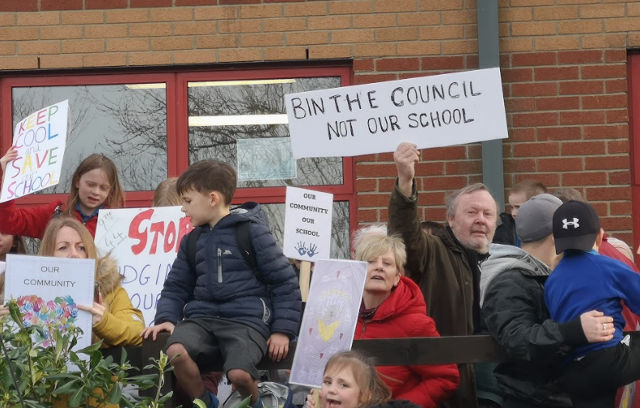 A crowd of angry parents, pupils and residents gathered outside West Wight Sport’s Centre last night, to protest the potential closure of All Saints’ Primary School.

The school’s future remains under consultation after the Isle of Wight Council announced its preferred option to deal with falling student numbers in the West Wight would be its closure, and the expansion of nearby St Saviour’s Roman Catholic Primary School.

‘Hey Councillor Brading, our school needs saving’
Islanders had made signs, and gathered outside last night’s cabinet meeting to protest against this decision. The crowd chanted ‘Hey Councillor Brading, our school needs saving’ as cabinet members made their way past them and to the front door.

More than 100 people attended the meeting, with some having to remain outside as the building was filled to capacity.

During the public question section of the meeting, parents quizzed councillors about the decision to close the school. “We do not believe we have misquoted, or misrepresented. All the reports are in the public domain.

“What’s presented in the report is factual. All Saints’ has three requires improvement Ofsteds and the headline from the visit last summer was that the school is not taking effective action to improve.”

The consultation into the issue closes on 15th April.