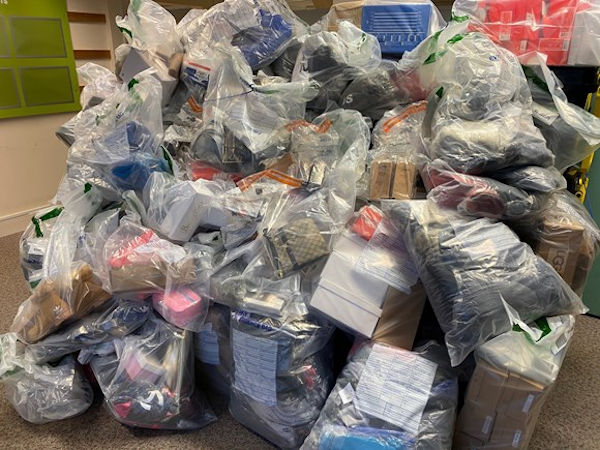 Fake branded make-up containing traces of lead were among a haul of more than 1,000 counterfeit goods seized by Isle of Wight Council Trading Standards officers in an undercover sting.

Rip-offs of major clothing labels such as Nike and SuperDry, as well as knockoff cosmetics advertised as Chanel, Kylie and Mac, were recovered from a property in East Cowes, following a raid in February 2018.

Eight-month prison sentence
Last week, Steven Mather and Michelle Aldridge appeared at the Isle of Wight Crown Court for sentence after admitting their role in the counterfeit operation which the court heard originated in Manchester.

Mather, 34, was handed an eight-month prison sentence, suspended for 24 months, after admitting two counts of unauthorised use of a trademark and a further offence of distributing cosmetics containing a prohibited substance.

The court heard Trading Standards launched an investigation after receiving complaints fake designer fashion was being sold locally through Facebook.

Over 1,000 fake goods discovered
The probe led investigators to an address in Beatrice Avenue where a search of the property uncovered more than 1,000 fake goods in an upstairs bedroom and in the loft.

The items included counterfeit clothing and shoes of well-known brands such as Ted Baker, Adidas and Nike, as well as bogus cosmetics and other branded products including Yankee Candles.

Traces of lead in makeup
The court was told samples of the makeup were sent for analysis and some were found to contain traces of lead.

Mather told investigators he obtained the goods from a man in the Manchester area and sold them under a Facebook profile he set up in the name of ‘Michelle Aldridge’. He said he did this in order to appear more trustworthy to female customers.

As well as a suspended jail term, Recorder Anna Midgley ordered him to carry out 100 hours of unpaid community work and pay prosecution costs of £400.

Aldridge was given 12 Rehabilitation Activity Requirement Days as part of her community order, but there was no order for costs.

Peace: “If it sounds to be good to be true, it more than likely is”
Speaking after the case, Councillor Gary Peace, the council’s Cabinet member for community safety, said:

“Counterfeit goods need to be taken off the streets as these products do not go through the correct safety checks that legitimate products do.

“In this case, some of the make-up samples contained lead which is particularly concerning as we believe these cosmetics would have been appealing to teenagers.

“Counterfeit clothes and other products are usually very poor quality and don’t undergo any safety tests at all. If it sounds to be good to be true, it more than likely is, and we will continue to investigate any intelligence that we are given to take these products off the market.”

Trading Standards welcome any information from the public on the sale of counterfeit products from any premises or people.

1 Comment on "Prison sentence after 1,000 fake goods found at Isle of Wight address"

Whenever I see a Louis Vuitton handbag I either think “What a mug, spending all that money on a bag” or “I bet they got that down the market for a couple of quid.” I know which I would prefer. (actually neither)