A lot has happened in the last year, but the Ryde Community Action Group have not given up and continue to fight to bring back Ryde Arena for the Isle of Wight community of ice skaters, ice hockey players and more. 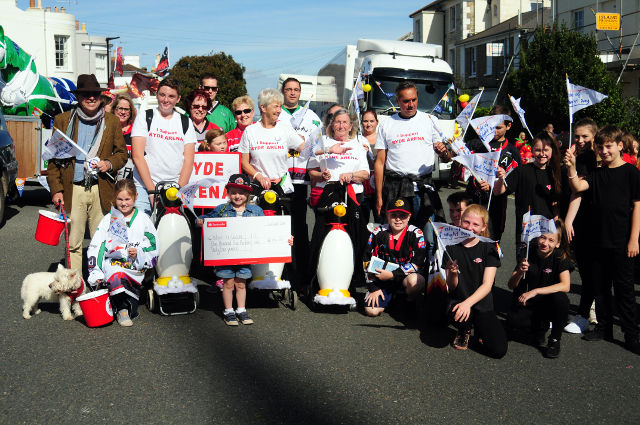 Cameron shares this latest update from the campaign to save Ryde Arena. Ed

The trauma began one year ago today, when AEW UK called in the bailiffs, changed the locks and shut the Community out. In response to this, we formed Ryde Arena Community Action Group, fighting back through solidarity which we first demonstrated joining together for our ‘ring around the rink’.

Most Islanders have fond memories of our ice rink, either through skating, playing or watching ice hockey, attending Christmas shows, rallies or concerts.

Users of the Arena
At the time of closing, the rink was home to four Senior Hockey teams; The Raiders and Buccaneers (who were semi-professionals) and the Vikings and Hawks.

In addition there were four Junior Hockey teams, five Synchronised Skating teams and the Isle of Wight Ice Dance and Figure Skating Club. The loss to the wider Community has been painfully felt; skaters as young as 18 moths used the Arena, not to mention wheelchair users and the elderly – some of whom had hip or knee replacements!

A minimum of eight schools used the ice rink for PE or extracurricular activities, English and foreign students and visitors loved the rink just as much as we did.

“We have our MP and every representative of the Isle of Wight Council supporting us, regardless of political perspective.

“Politicians don’t come together often, but this is beyond politics – this is for our Island!”

The Isle of Wight Council’s own valuation of £750,000 doesn’t allow for the serious dilapidation since AEW took over the lease.

We currently have representatives from the Isle of Wight Council, Bob Seely MP and members of our Committee in talks with AEW UK to find a resolution to the situation. We remain positive that the Arena will in time, be fully restored and operational as a Community-run ice rink.

Anniversary walk
On Saturday 7th October we are taking part in a one year anniversary walk, 12 km for every month the rink has been closed.

Please show your support and join us outside the rink at 10:30am.

Has the survey been done yet ?