This sparkly seven-year-old from the Isle of Wight has just been recruited to the Wight Trash skateboarding team. Check out these great videos of her awesome performance. 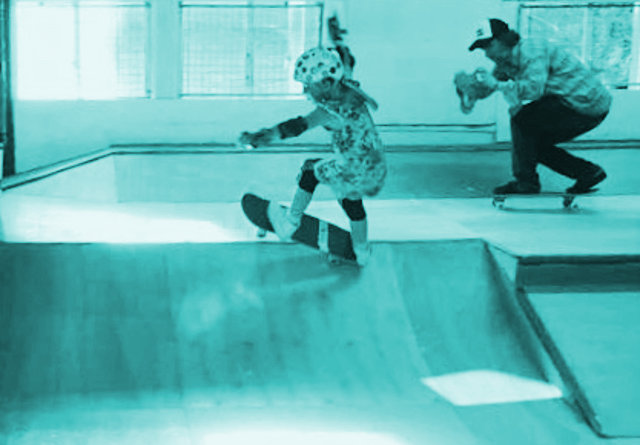 On International Go Skateboarding Day 2018 (21st June), it’s great to be able to share the news that Isle of Wight skateboarding brand, Wight Trash, has announced their latest team member.

Sparkly seven-year-old Martha, who attends Niton Primary School, has only been skating for 18 months, but as you’ll see from the videos below, it’s all come naturally to her. ‘Shut up and skate’
News of Martha joining the Wight Trash Team was announced following Sunday’s Vert at Southsea Skatepark – Shut Up and Skate – celebrating 40 years at one of the UK’s oldest skateparks. She’s their youngest ever team member.

“Rad day at Southsea Skatepark. Great to see Street Nowik and Alex Griffiths nailing it on the vert. And joining them in our Wight Trash team we can officially welcome Martha. Martha has been skating with us at Skate club for around 18 months. Now age 7 we thought it time we hooked her up.

“Martha’s out there fully repping girls in skateboarding. She’s got her own style and has a fearless attitude. Tackling her first vert comp today is a sign of big things to come.

“Greg had the pleasure of handing over a special blue edition logo board. The Martha blue Logo will be in the shop and on the website later.” Ballet didn’t work out
Martha’s mum, Heather, told OnTheWight that Martha had tried ballet, but it was not for her. This plucky young girl prefers to freestyle and as you can imagine, that might not work in something as regimented as a ballet class.

Bumping into Martha last night as she just finished a session with John Cattle’s Skate Club (he teaches all ages, from micro-shredders to oldies like me), Martha told us that she was “very excited” about being on the Wight Trash team and looked forward to taking part in more competitions.

Must skate, will travel
As well as sessions at the skate club, Martha travels around the Island and beyond with her Dad to check out all the skateparks (he’s a skater too).

Here’s Martha (and others) in action on Sunday. Notice how quickly Martha manages to get a decent height on the ramp.

Here’s some footage of Martha earlier in the year.

This drop-in is amazing for a seven-year-old, with less than two year’s experience …

This one is my favourite, watch to the end and you’ll see why …

Thanks to Martha’s parents, Heather and Rob for allowing us to share these videos that show just how awesome seven-year-old Martha is. I’m sure we’ll be seeing more of Martha in the coming years.